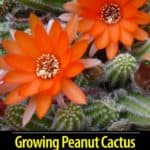 Echinopsis chamaecereus is a low-growing plant with bright orange or red flowers, making it a popular houseplant or addition to a cacti garden.

Both plants are part of the Cactaceae family, which includes 1750 different species of cacti.

The individual stems are typically about a half-inch thick and may reach up to 6” inches long.

Compared to other cacti, the stems grow relatively quickly.

When fully mature, the stems form a large cluster, creating the appearance which gives it the common name “peanut cactus.”

The plant blooms in the spring with blood-red or orange, unscented flowers, a little over an inch in diameter.

During the day, the flowers open. At night, they close back up.

Unfortunately, the flowers of Echinopsis chamaecereus only last about one week and don’t always appear.

The plant is winter hardy in USDA zones 10 to 12. In most of North America or Europe, the plant needs to overwinter indoors.

It can thrive indoors at normal room temperature when given enough light. In fact, it needs as much light as it can get.

In the summer, ensure the plant has full sun, especially after the flowering season.

Keep the soil relatively dry during the winter months. It may only need water once per month.

At the start of spring, begin increasing the frequency of watering. Make sure the pot has a drainage hole.

Allow the soil to mostly dry between watering and avoid pouring water directly in the center of the plant.

From April to August, add liquid fertilizer when watering the peanut cactus. Use a commercial cactus potting mix for optimal conditions.

An alternative option is to use an equal combination of regular potting soil and perlite or pumice.

Transplant the plant every two to three years after the flowering season.

How to Propagate Echinopsis Chamaecereus

Propagate the chamaecereus sylvertri using the stems of the parent plant.

Toward the end of the fall season, when flowering is over, remove one or more of the small “fingers” growing from the base of the plant.

Place each cutting in its own pot and shade from direct sunlight.

The peanut cactus is one of the few species of cacti spider mites tend to attack.

During an infestation, small white or yellow patches may appear on the stems.

Spray the cactus with water to wash away the mites.

The humidity also discourages the pests.

If the spider mites remain, treat with a miticide.

Other issues to watch for include black stem rot and low humidity.

Black stem rot is a type of fungal attack from overwatering. The rot starts at the base of the plant.

For severe rot, discard the mother plant and save a few of the stems for propagation.

If the buds start to fall off during the flowering season, the plant is not getting enough water, or it’s in an area with low humidity levels.

Water the soil thoroughly and move to a warm window.

The peanut cactus grows easily indoors and goes well with other cacti in a small dish garden or in hanging baskets.

Larger plants may need their own containers as the low-growing stems grow in a variety of directions.