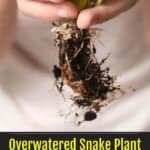 Sometimes the botanical world can be compared to politics – making decisions, then being surprised at the predictable results.

One of the best examples of this is the snake plant, known to most as Sansevieria spp.

Botanists did a genetic sequencing of sansevierias and discovered they were genetically similar to dracaenas, so they decided to reclassify the entire genius into Dracaena spp.

The problem with this decision is that sansevierias have very different appearances and care needs from dracaenas.

As a result, plant growers are having more and more trouble caring for their snake plans because a lot of sellers are labeling them as dracaenas now.

Therefore, unless you know the differences between a sansevieria (most growers refuse to use their new classification) and dracaena, it’s very easy to harm your plant, especially by overwatering it.

If you have a sansevieria, there are several signs the plant will give to let you know it’s being overwatered.

The good news is it’s easy to save a mother’s tongue from overwatering, especially if caught early on.

As mentioned, there are several signs to look for.

Some of these can also mean other problems, so try to look for multiple symptoms when you aren’t sure.

From most obvious to least (in terms of it being overwatering):

You may have an overwatering problem if the soil feels soggy or has puddles forming on top.

If this was a one-time incident (such as allowing your child to water the plant for the first time), you could often solve the problem by simply tipping the plant so any excess can drain off.

However, every time you overwater, it increases the chances of mold or fungus developing.

This may be accompanied by a cottony growth on the soil surface, discolored soil, or the presence of fungus gnats.

A foul or mildewy smell is also a common symptom of fungus-contaminated soil.

This condition directly results from overwatering, although it isn’t a common side effect.

Edea happens when the planet absorbs too much water too fast, causing the cells in leaves to burst.

These ruined cells create discolored blisters, which are more common on the undersides of leaves than the top.

The blisters themselves can eventually burst if you don’t address the overwatering.

This is another common set of symptoms that usually occur together and most likely mean overwatering.

The plant will try to store excess moisture in its leaves, causing them to swell, much like your skin when left in water too long.

The affected leaves will usually droop from the extra weight and begin to feel soft or mushy.

These symptoms can also extend into the stems and petioles in extreme cases.

Perhaps the most common symptom, leaf discoloration, is also the hardest to pin down due to overwatering.

It can signify everything from improper lighting to infestations or even an excess of fertilizer or soil toxins.

The leaves will generally turn yellow or brown at the tips and along the outer edges.

They may also fade overall. Untreated, brown tips can die and become necrotic and black.

Note that overwatering often leads to discoloration beginning on the outermost leaves, whereas other causes may start on the inside, upper leaves, or lower leaves.

Salvaging your snake plant often depends on how soon you catch the problem, but the biggest threat of overwatering is root rot, which can be bacterial or fungal.

The process for treating an overwatered snake plant is simple using the following steps:

Your priority is to get the source out of the problem.

Don’t yank the plant out, as there may be root rot involved.

Step 2: Tend To The Roots

You can look for and treat any root rot with the roots exposed.

Healthy roots are almost always white or a light brown to tan color.

Conversely, rotting roots will be dark brown or even black, with a mushy texture usually accompanied by a foul odor.

Using sharp, sterile shears or a knife, remove each diseased root, resterilizing the tool after each cut.

Once all visible traces of rot are gone, you’ll need to sterilize the plant.

Most growers recommend dipping the roots in fungicide, but we only recommend this if you find no signs of root rot.

Many different fungi commonly cause root rot, but some bacteria can be responsible.

Therefore, when dealing with snake plant root rot, it’s better to soak the roots in a solution of 1 part bleach to 10 parts water for 30 minutes, then air dry for 2 to 3 days.

This will kill both fungal and bacterial infections without harming the plant itself.

It’s usually best to get a new, unused container to replace the old one.

Make sure it has adequate drainage holes and isn’t too big for the plant (if the pot is much larger than the roots, they won’t be able to absorb any water near the pot edges, which can invite fungal growth or mold).

Note that you CAN reuse the old pot if it meets the criteria above but must first be sterilized.

To do so, soak the pot in a bleach solution. Only this time, you want 1 part bleach to 9 parts water and should aim for 20 minutes or longer (we suggest 30 minutes).

Allow the container to air dry completely before use.

If you already know how to properly sterilize the soil, good for you (you can skip over this step if you also learn how to revitalize the sterile soil and prepare it for potting).

However, as most people don’t have the time, resources, and knowledge to do so, we highly suggest discarding the old potting soil.

This can be a good idea, as fresh soil will have more accessible nutrients, especially since using fertilizer for the first month or two after root rot can severely burn your plant.

Use only quality potting soil (or a good soilless mix), ensuring you don’t use a cheap brand.

Unless the company has an excellent reputation, such as Miracle-Gro, there’s a good chance the low price tag results from cut corners, which usually equates to not sterilizing the soil before packaging.

If you want to create an extra buffer, line the bottom of your container with ½ to 1” inch of gravel or aquarium stones.

This creates a buffer zone for excess water so the roots won’t have to sit in it.

It’s also a good idea to mix in a bit of perlite or coarse sand to keep the soil from compacting (which can have similar effects to overwatering).

Add just enough water to get the soil slightly moist, then let it sit for about 15 minutes.

Plant your mother’s tongue and give it another very light watering (this should be just enough to help the soil settle).

Avoid fertilizing for 1 to 2 months while the roots heal.

How To Avoid Overwatering (Soak-and-Dry Method)

Always use the soak-and-dry method instead of a schedule to avoid overwatering this (and most other plants).

Here are the following steps: