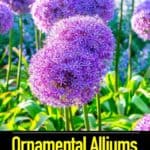 The Ornamental Allium – They’ve been called the “Aristocrats For The Garden.”

Many gardeners across the country are beginning to show interest in ornamental onions (Alliums).

These mostly strong-smelling plants, belong to the genus that includes onions.

In spite of their showy blooms and the pleasing form of growth in some species, these bulbous allium plants have long been undeservedly neglected.

These easily-grown, magnificent long-lasting flowers, can flourish in any good garden soil anywhere in the United States.

In the last few years attention (due to social media like Pinterest) has been called to the tallest of the ornamental allium clan – Allium giganteum.

Allium giganteum is but the tallest and latest summer blooming bulbs (June/July) of a company of these spectacular floral spheres, natives of the Near East.

Allium elatum, with a 3′-foot stem and a larger and more refined head of flowers, is the most beautiful of all and the only one with glossy basal leaves.

It blossoms in May, as do two other fine ones – Allium aflatunense and Allium rosenbachianum.

All of these look down on Allium karataviense (15″ inches), but this allium has a large ball of gray rather than purple flowers and large broad leaves attractively tinged with red.

Quite different from these dense flower heads is the loose, open and airy head of Allium cristophii also listed as Allium albopilosum, commonly called “Stars of Persia.”

It is a native of Turkey and is made up of some eighty starlike flowers on long pedicels forming a ball 10″ to 12″ inches in diameter.

These Near Eastern floral wonders are:

In late spring, Allium cristophii bears astonishing silvery-lilac flowers in large heads. Together with other alliums, it comes at the time when few bulbs are in flower. After tulips, us well as Dutch and Spanish irises, have finished blooming.

From other parts of the Northern Hemisphere come smaller, very different but very beautiful species.

Once you see the clear cornflower-blue balls of Allium azureum, 2-1/2″ inches in diameter on 2′-foot stems, you will never forget the lovely coloring nor put out of mind the contrast this plant makes when combined with the foot-high, flat, deep yellow umbels of the golden garlic, Allium moly.

Both of these plants bloom in early June.

Except for size and date of bloom, these two alliums are much alike. Both are excellent flowers for florists.

Outside, Allium Cowanii (2-1/2′ feet high) blooms in early May; Allium neapolitanum (1′ foot) in late May.

Two most valuable alliums are Allium triquetrum and Allium ursinum. They bloom freely in shady locations.

Allium triquetrum has an 18″inch, three-sided stem topped with a pendant cluster of feathery, starry flowers.

Unique in the flower kingdom are the bursting-skyrocket flowers of Allium flavum and Allium pulchellum.

Allium flavum is the smaller, a foot and a half high with light yellow flowers. Allium pulchellum is the larger and more attractive, with light orchid bloom.

Both have flower buds encased in long coverings which remain attached at one end forming long streamers after the flower head has opened.

The skyrocket effect comes from the opened flower head made up of tiny round blooms on thin pedicels that ray outward in all directions.

An excellent cut flower is Allium sphaerocephalum, whose spheres are:

It blooms in July and is a mecca for honey bees.

Flowers of Allium aflatunense, appearing in May, are pale violet; they measure 4 inches in diameter, on stems 2-1/2 to 3′ feet high. This species, originally found in Turkey, is very fine for cutting. Like several other Allium species, it is also suitable for use dried in winter arrangements.

We should mention at least two of the many rock garden alliums.

Allium Ostrowskianum, with loose clusters of lavender-pink flowers, and there is Allium narcissiflorum formerly Allium pedemontanum, with deep pink bells – the real gem of the rockery.

This latter, unlike all the other alliums, mentioned, does not come from a bulb but from a tiny rootstock.

All alliums grow readily in most soils loose enough for growth but do their best in a rich sandy loam.

Most are winter hardy even in severe climates.

The bulbs should be planted in the fall 3″ to 4″ inches deep in ordinary, well-drained soil.

With the exception of Allium triquetrum and Allium ursinum they prefer a sunny location. But Allium moly will tolerate considerable shade.