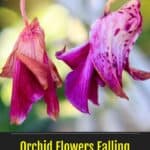 There are a lot of houseplants out there that are cherished for their foliage, but orchids aren’t among them.

On the contrary, the orchid is a popular garden plant family that is slowly becoming even more popular as an indoor plant.

Their flowers are quite varied and never fail to please when in bloom.

But what happens if your orchid isn’t blooming properly?

Perhaps the flowers are wilting and falling off, or they might not even make it past the budding stage.

The good news is that problems with orchid flowers can usually be resolved by simply checking how you care for the plant.

Bud drop can happen in any flowering plant, but some orchids can have a more severe version called bud blast, where all of the buds and blooms will drop at nearly the same time.

Most of these instances of flower loss can be cured by addressing common care issues.

This is one of the most common causes of wilting flowers but is often overlooked for a very simple reason.

There are approximately 800 genera of orchids out there, and they don’t share the exact bloom times or durations.

Knowing the genus your orchid belongs to can let you know if those suddenly wilting blooms are normal.

For example, Stanhopea blooms will only last for 3 to 4 days, while Cymbidium blooms can last for 8 to 10 weeks.

Many of the most common orchids will have flowers lasting 6 to 8 weeks.

Note that Phalaenopsis orchids lack a dormancy period, allowing them to often have two blooming periods per year.

Still, it’s rare for other genera to bloom twice, and any second bloom period may be cut short.

Failing to use the proper watering techniques can result in your orchid getting too much or too little water.

In the case of underwatering, the orchid will drop its bus to conserve resources.

You’ll know the plant isn’t getting enough water because the buds will appear dried or withered.

Meanwhile, overwatering can choke the roots, preventing them from drawing water or nutrients.

Even worse, it can lead to root rot, which will destroy the root system and eventually kill the plant.

In both cases, the buds will drop, often before blooming.

The good news is that you can easily prevent watering issues by using the soak-and-dry method.

While not as common, certain pests or diseases can damage flowers and cause them to fall off prematurely.

Anthracnose, botrytis blight, and some caterpillars (often referred to as worms) can damage your orchids that extend to the flowers.

Treating your plant regularly with a neem soil soak can help prevent these problems, but you may need to resort to chemical solutions if the infection or infestation is widespread.

Orchids are native to rainforests and tropical regions, so they tend to require a higher level of humidity to thrive.

Normal household humidity levels of around 40% percent will work, but they’ll be much happier in a range of 50% to 80% percent.

Consistently low humidity can cause the plant to drop its buds and is one of the causes of bud blast.

The good news is that it’s easy to improve the humidity around your orchid.

Grouping plants will naturally increase humidity, as more than 97% percent of the water a plant absorbs is used for transpiration, a process similar to sweating.

Grouping plants allows the effects of transpiration to be multiplied, increasing humidity levels for all plants in the group.

Pebble trays are another great option.

There are many relatively inexpensive humidifiers out there that are small enough to affect a small area instead of relying on the larger, more costly floor models that affect entire rooms.

The nice part about these humidifiers is that they often now include digital controls that can monitor the humidity and run as needed, making them far more energy efficient.

Sudden temperature changes, as well as extreme temperature, can cause your orchid to drop buds or flowers and may also lead to bud blast,

Ideally, it would help if you were keeping your orchid in a temperature range of 65° to 75° degrees Fahrenheit.

Anything over 85° degrees Fahrenheit will cause the plant to wilt and can kill the flowers.

Temperatures below 55° degrees Fahrenheit will likewise damage the plant and force it to go dormant, resulting in a loss of any flowers or buds currently growing on the plant.

While it’s generally easy to control indoor temperatures, it’s important to remember that sudden drafts can cause temperature shock.

You can avoid this by keeping your orchid away from vents, air conditioners, and frequently opened and closed doors.

Also, make sure your orchid is getting plenty of bright, indirect sunlight.

While it’s easy to regulate temperature and humidity indoors, plant owners often forget that lighting is more difficult to control.

Avoid full afternoon sun, as this can scorch the plant, but also don’t keep it shaded, or it won’t have enough energy to bloom properly.

Last but not least is the effects of transplant shock, including bud drop.

This is usually not a problem, but transplanting or repotting your orchid at the wrong time can exacerbate the shock or affect its blooms.

As a general rule, you should never uproot an orchid while it’s in bloom unless there’s an emergency (such as the discovery of root rot).

Instead, always aim to repot or transplant the orchid early in spring before it begins producing buds or once the bloom period has ended.

You also should never uproot your orchid when it’s dormant.

Always use a fresh potting medium (soil-based or soil-free), dampen the medium slightly before planting the orchid, and follow up with another light watering to help the medium settle.

Avoid using fertilizer for one or two feeding periods to give the plant a chance to acclimate.

By following these simple tips, you’ll help reduce the severity and duration of transplant shock while also giving the orchid a chance to enter into its normal blooming period.