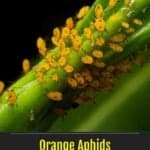 Chances are if you have plants, you have at least one member of the dogbane family like the Mandevilla vine.

The dogbane family has it all ornamentals, herbs, shrubs, and trees.

But they also have little orange bugs that love to attack your precious plants.

These bugs are aphids, and they can quickly spread to nearby plants and do a ton of damage if not addressed.

While there many species of aphids that can be orange, chances are you’re dealing with the oleander aphid (Aphis nerii), which enjoys one of the widest menus of all aphids.

What Are Orange Aphids?

The dogbane (Apocynaceae) family are their preferred victims, but they’ll also go after plants in the daisy (Asteraceae), morning glory (Convolvulaceae), and spurge (Euphorbiaceae) families.

The species reproduce via parthenogenesis, meaning the nymphs are born pregnant and give live births instead of eggs.

One interesting fact is that scientists have produced male oleander aphids in a laboratory setting, but none have ever been observed in nature.

While this species often lacks wings, populations that migrate between different food sources will often have wings.

What Damage Does Orange Aphid Infestations Cause?

Just like other aphid species, the orange aphid tends to hang out on the undersides of leaves, where they’re harder to spot.

Once there, they pierce the leaf surface with their proboscis and begin drinking its sap.

Not only will this damage or even kill the leaves and hinder photosynthesis, but their frass (poop) is its hazard.

Known as honeydew, the frass can lead to sooty mold and attract ants. The ants protect the aphid colony from predators in exchange for the honeydew.

Even worse, the aphids are vectors for a wide range of:

While orange aphids usually won’t kill a plant on their own, the way they weaken plants and can transmit multiple diseases can destroy your garden or houseplant collection if not stopped.

Fun Fact: Oleander aphids were responsible for one of the biggest plant rages in history.

Beginning in the 1630s, people noticed their tulips were developing red striations that became incredibly popular.

It wasn’t until nearly 290 years later (and after a house was sold to obtain a single bulb from these seemingly mutated plants) that it was discovered the mutation was caused by tulip breaking virus, a disease spread by the oleander aphid!

How To Control Orange Aphids?

Be careful when using chemical pesticides against aphids.

Not only do aphids have increasingly effective resistance to pesticides, but you may end up killing beneficial insects that are helping to control the aphid population.

Instead, it’s best to stick with natural remedies. They can take a little longer but are more effective (and safer) in the long run.

An essential oil spray is one of many household remedies that will work on the oleander aphid.

Mix 4 to 5 drops of clove, peppermint, rosemary, and/or thyme to 1 cup of water and mix it all into a spray bottle.

You can spray your plants every 2 to 3 days in the morning or evening, and the oils will slowly kill off the infestation.

The oleander aphid isn’t helpless and can defend itself against some natural predators.

Not only will ants protect the species, but they can excrete a toxic substance from their bodies that will fight off many of their enemies, such as some species of spiders.

But ladybugs are immune to this substance and are often the greatest ally as a result.

Other beneficial bugs that prey on aphids include:

Even some smaller bird species will go after aphids and their eggs.

To invite these hunters into your garden, sprinkle some Diatomaceous earth (DE) around the bases of your plants to deter ants.

Next, do a bit of complimentary gardening by planting marigolds and other plants that attract the predators you wish to hire.

Finally, if you don’t have a large population nearby, you can order many hunters online, such as ladybugs and parasitic wasps.

There are two major ways to use neem against aphids.

100% percent cold-pressed neem oil can be used to create a soil soak that will only affect bugs that try to eat the plant, keeping bees and beneficial bugs safe.

Meanwhile, clarified hydrophobic neem oil has had most of the Azadirachtin removed for use in commercial pesticides and works great as a foliar spray.

The soak will decimate a population over time, while the spray kills instantly but requires direct contact to work.

It can be around 2 weeks before you notice the change in both cases.

However, neem is safe and non-toxic, meaning you can use it as a preventative every 2 weeks and can treat food crops up to 24 hours before harvesting.