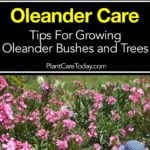 The Oleander plant (Nerium oleander) is an ornamental shrub with attractive characteristics from flower to stems. The plant is an erect evergreen shrub, also known as adelfa plants, with lovely flower clusters of pink flowers. Each flower has 5 spreading petals.

The oleander tree flower clusters are supported by the plant’s slender stems. Lance-shaped with leathery texture and pointed tips refer to the plant’s leaves.

If the oleander flowers come in clusters, the leaves come in groups of 2 or 3 along the branch.

Oleanders are so well known to both northern and southern gardeners, they need little introduction or description.

They are grown everywhere in the South, and at one time ranked with beautiful hydrangeas as northern house plants.

For some obscure reasons, oleanders (Nerium) faded from popularity some years ago, but they are now making quite a comeback.

Give these plants well-drained soil, full light, and plenty of fresh air.

Oleanders are salt and drought tolerant, thus making it an excellent flowering shrub for coastal areas as well as for xeriscaping.

After flowering, cut the plants back and rest them for a few weeks. If cuttings are wanted, take them of mature wood when you cut the plant back sharply; pruning to shape the plant may be done at any time.

Clean up and dispose of all debris after you finish pruning.

Oleander poisoning occurs when man and animals eat the stems, leaves and flowers of the plant. But on the other side, this poisonous plant are beloved by scale insects and mealy bugs, they have long been popular subjects.

To control all these, apply regular applications of sprays containing neem oil insecticide for plants or insecticidal soap spray solution.

The Oleander caterpillar, a pest commonly found in oleander plants, loves to gregariously eat the leaves.

These caterpillars possess immunity against the tree’s poison. It grows to a polka-dot wasp moth which lays eggs on the underside faces of the leaves.

If not controlled, these greedy pests may cause unsightly defoliation. This may not kill the plant but it makes it vulnerable to other pests such as scale insects.

Oleander leaf scorch is a lethal disease that kills oleander shrubs. This condition scorches the leaves of oleander plants and spread quickly.

Experts point out two culprits for oleander scorch: the bacterium Xylella fastidiosa and the pest that spreads them, the glassy-winged sharpshooter.

Oleanders may be grown in bush shape or trained as standards (like a tree rose).

In the latter, plants are topped at whatever height is desired, and good crowns will develop the same season.

However, owing to the weight of the large flower heads, which are borne in terminal clusters, it is not advisable to allow the plant to flower the following year, as the branches will not be strong enough to support the blooms.

I have very little room for duplication of indoor plant material, but I am so enamored of oleanders, I have two plants. The larger one is a bush, and has double pink flowers.

From this I have taken innumerable cuttings, which root in plain water.

The other plant I am training as a standard tree form, and already I can see the space-saving advantage of this form.

With this variety of flowers, it will have white blossoms.

Hence why it’s often searched for as “white oleander trees”.

Oleanders have single or double flowers, and in addition to the white, range through shades of pink and rose to an almost-purple color.

The yellow oleander (Thevetia peruviana), another poisonous plant, serves as an ornamental plant. Its fragrant flowers bloom all throughout summer and fall.

Don’t be afraid to try trees; when confined to a pot, they will remain a reasonable size for a long, long time.

When To Prune Oleanders & How?

Question: My potted oleander last year grew to four feet in height and developed three new branches – one on the old stem and two from the root. The old branch bloomed all summer.

I want to cut this plant back to a smaller size – would you tell me when and in what way it should be pruned?

Answer: The best time in pruning oleander plants is right after they have finished blooming… and pruned rather severely. Cut back all the tall stems until about half the total foliage has been removed.

For those varieties which bloom well into the fall, they should be trimmed by mid-September.

This will make the plant grow short and bushy rather than tall and spindly. After pruning give the plant good light and when new growth starts, increase both the temperature and water.

Why Does My Oleander Have Lots of Buds But No Blooms?

Question: I have several two-year-old oleanders. In the spring they are placed on the south side of the house where they get plenty of sunshine and left there during the summer.

The plants are doing well and have had many buds but these never open. What is causing this? Eleana, North Dakota

Answer: To bloom properly, oleander wood should be firm and well-ripened. The latter part of the summer should find the growth fairly well made and from that time on the plants should be kept on the dry side, with no fertilizer added, with all the light and air possible.

The shoots made this season should bloom the next if they are wcll-hardened. I suspect the dropping of buds is caused by drying at the roots, or poor ventilation in the spring before they go outdoors.

During winter the oleander should be grown quite dry so that it remains in a resting stage. About the first of February place the plant in a warm sunny window and increase the amount of water. Although these plants are drought-tolerant, they appear at their best with proper watering.

About the first of March and again each month until September give the shrub a good liquid feeding. Use something like any liquid water soluble 20-20-20 plant food.

Dissolve the plant food in water at the rate of one heaping tablespoonful to a gallon of water.

When the blooming period is about over, usually by June, prune the plant back rather severely, but keep it growing vigorously until September.

From September on water should be withdrawn sufficiently to permit the oleander plant to remain virtually at a standstill until the following February.