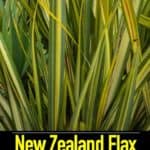 It features long, sword-shaped leaves that reach up to six feet tall. This evergreen perennial is part of the Asphodelaceae family, which includes over 900 species of plants.

The people in New Zealand simply call it flax. When grown outside of this native region, the flax is typically cultivated as an ornamental plant.

The New Zealand Flax is easy to grow and looks attractive all year, but there are a few steps to follow for optimal growth.

The leaves are mostly green, with lighter green borders and red edges and tips.

The phormium tenax needs room to reach its full size.

When grown inside a container, the leaves form dense clumps that may reach several feet.

In the ground, the leaves can reach six feet tall and the same width.

There are also several dwarf varieties that stay much smaller compared to the standard New Zealand Flax.

The flax is mostly grown for its foliage, but it does flower. Unfortunately, only older flax bloom.

When the plant matures and starts to flower, it produces a long flower stalk that rises above the foliage.

The stalk produces many tubular-shaped flowers. Depending on the variety, the flowers are either red or yellow and do not offer a noticeable aroma.

The plant is easy to care for and hardy, which means that it may last for several years.

It can survive dark conditions during the winter, allowing the plant to grow older and eventually blossom.

The best conditions for the phormium tenax include lots of light and warmer temperatures.

It is recommended for USDA hardiness zones 8 to 10, but may not survive the winter in zone 8.

The suggested temperature range during the winter is 40° – 50° degrees Fahrenheit.

If it gets below this temperature range, keep the plant indoors in the winter.

Outdoors, the plant thrives in full sun to partial shade. Indoors, set it near a window with sunlight from the south or west.

Phormium is drought tolerant but enjoys plenty of water during the summer months.

The main growing season lasts from May to early August. During this period, give the plant liquid fertilizer once per week.

As the temperatures drop, the plant doesn’t need as much water. Gradually reduce watering in the winter.

If the soil is a little too compact, try adding some pumice or perlite to increase drainage.

Transplanting isn’t needed unless the plant starts to outgrow its home.

Transplanting is best completed in the spring, just before the active growth period starts in May.

TIP: When transplanting, consider dividing the older clumps to easily propagate the plant.

Dead leaves may need removal to allow healthy growth. Use pruning shears or sharp scissors to cut the dead foliage from the plant.

The leaves are thick and difficult to tear by hand. The fibrous leaves make it a valuable plant in its native New Zealand.

It’s often harvested for the leaves, which are used to produce fibers for various products.

How to Propagate Phormium Tenax

The easiest way to propagate the phormium tenax is through division.

Separate the clumps when transplanting the plant, placing each clump in its own container.

It is also possible to propagate from seed, but it may take several years for the seedlings to grow to mature plants.

The plant isn’t considered invasive or toxic. It’s safe for growth near pets and children, but it does have a few potential threats.

The biggest threats to this exotic plant include scale insects and mealy bugs. They may appear near the base of the plant.

Try to manually remove the insects using a cloth or a spray. If this doesn’t work, use an insecticide like neem oil.

Another issue is brown tips on the sword-like leaves. This is often a sign that the plant has dried out.

NOTE: If the tips remain brown after adding more water, the problem may be the result of overwatering.

Scale back the watering and wait for a change in the condition of the foliage.

The New Zealand Flax has a distinct look that works well on its own as a focal point.

Several varieties of Phorium flax include:

Consider using the plant in garden design and putting the plant on display around a patio or balcony as a container plant where it can get enough sunlight.

If you’re lucky enough to live in a warmer region, the plant looks great when paired with shorter plants in a flower garden.

It offers more height, which can give the garden bed more depth.