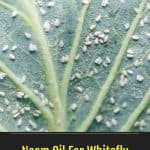 Growing plants indoors can lead to infestations, but not nearly on the level of your outdoor plants.

One of the most frustrating infestations for gardeners is whiteflies. These tiny scourges can decimate food crops and spread disease.

Neem oil is one of the most trusted natural insecticides for many food crops, including tomatoes, squash, and fruit trees.

But will this wonder extract of the Azadirachta indica tree work against a whitefly infestation?

Can You Use Neem Oil For The Control of Whiteflies

Fear not, whiteflies are one of the many pests neem oil works against – and it works well.

Read on to learn more about what whiteflies are, how to use neem against whiteflies, and how it works.

Whiteflies are tiny insects that typically measure between 3/64 and 5/64” inches long.

There are more than 1500 known species, all belonging to the Aleyrodidae superfamily.

These pests are closely related to two other common garden pests, aphids, and mealybugs.

Related: How To Use Neem Oil to Kill Aphids | Mealybug Control With Neem Oil

While not a type of fly, they might be mistaken for albino gnats when in flight, especially considering their habit of hanging out in clusters.

Adults lay 400 eggs at a time, and their life cycles are very short, so the moment you spot one, the infestation is probably already severe.

As with other piercing insects, whiteflies have adapted to hiding on the undersides of leaves to avoid natural enemies like lady beetles, parasitic wasps, and sticky traps.

They have long, piercing mouthparts which they use to drink the sap from host plants.

This can severely weaken the plant over time and can discolor and eventually kill leaves.

Even worse, their poop (known as honeydew) is a sticky substance that attracts both ants and fungal spores.

As a result, heavy infestations on plants will often suffer from sooty mold infections.

While they will readily go after ornamental flowers and houseplants, they are more notorious for attacking food crops, such as:

While non-food plants can suffer and sometimes bounce back, the threat of damage and disease is so severe that whiteflies cause damage estimated at several hundred million dollars per year.

The Three Types of Neem Pesticides

Neem oil is an excellent natural substance that comes from all parts of the Azadirachta indica tree.

The largest oil concentrations may be found in the fruit and seeds, and these are used most frequently for oil production.

Parts of the tree are cold-pressed to extract the oil, and any form of heat exposure is avoided, as this can degrade the oil.

The resulting liquid is known as 100% percent cold-pressed raw neem oil, while the solids are called neem cakes.

The Azadirachtin is often extracted from raw neem to be used in other insecticidal products, and the resulting oil is known as clarified hydrophobic neem oil.

The clarified neem contains .5 to 3% percent Azadirachtin and is marketed according to this remaining concentration.

What Neem Oil Does

All three types of neem are used to fight insects, fungal infections, harmful microorganisms, and even bacteria.

However, neem cakes, used as a fertilizer with insecticidal properties, are useless against a whitefly infestation, as it protects the soil but not the leaves.

Of the remaining two, raw neem is used systemically, while clarified nem is used topically.

When used as a soil soak, the raw neem is absorbed by your plant’s roots and spread throughout the plant’s circulatory system.

As a systemic treatment, the neem remains potent for up to 22 days and will bolster the plant’s natural immune system against many forms of invasive fungal infections and other diseases.

Insects that pierce the plant’s outer skin or its fruit will ingest the Azadirachtin, but bees, butterflies, ladybugs, and other beneficial insects will never contact it.

Once inside a bug such as whitefly, the Azadirachtin’s similarity to natural insect hormones will trick the pest into thinking it’s full, causing it to starve itself.

It also messes with growth hormones, interrupting the progression of instars and nymphs to the next growth stage and causing infertility in adults.

The process is slow but devastating once the last of the eggs have hatched and the colony cannot produce any more.

The clarified neem has a very different effect and is used as a foliar spray.

This foliar spray is a contact poison, and the oil will completely dissipate within 45 minutes to one hour once exposed to natural UV light.

It must be used at either dusk or dawn, as these are the times when beneficial insects tend to be least active.

When the oil hits an insect, it clogs its airways, suffocating its victim within minutes.

Due to its sensitivity to light, foliar sprays must be used more frequently.

While it will affect whiteflies, the process will be more frustrating, as many will take flight and may not come in contact with the oil.

However, when used in conjunction with a soil soak, the foliar spray is a handy weapon and will destroy surface fungal infections that the systemic treatments can’t get to.

You will likely wish to go for a one-two punch using both a Neem soil soak and foliar spray.

Be sure to test your treatment on a tiny part of the plant 24 hours before the full treatment to ensure your plant isn’t allergic or overly sensitive to the neem.

Both require an emulsion (to break the water’s surface tension and allow mixing with the oil), which is simply Dawn dish liquid, insecticidal soap, or pure castile soap added to water.

Be sure to get the undersides of all leaves and any crevasses, but avoid the flowers (it’s safe to spray fruit, however).

Apply this treatment every other day for 14 days or until the infestation is gone.

For the soil soak, combine 2 tablespoons of raw neem oil and 1 gallon emulsified water, then pour 2 to 3 cups around the plant base.

Repeat every 21 days as needed.

You can use both as a preventative, applying the foliar spray every 14 days and the soil soaks every 21 days.

Just be sure to perform any treatments at least 24 hours before harvesting any food crops.