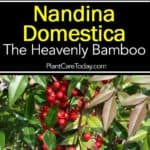 When used correctly, the Heavenly Bamboo Nandina domestica a member of the Barberry family (Berberidaceae) is an ornamental garden shrub to be treasured the whole length of the West Coast and beyond.

In USDA hardiness zones 8-10 it grows as an evergreen shrub. I’ve seen Nandina growing as a landscape specimen in Florida, Georgia, Texas, Tennessee and Virginia.

Though unrelated to the bamboo species, it may be put to the same architectural uses, for each of its erect, notched and cane-like stems carries a grace of its own.

The dainty white flowers appear in late spring, followed by brilliant berries and delicate, evergreen compound leaves of the Nandina domestica bush are a decided asset in many gardens.

Freedom from diseases and insects and ease of culture also make nandina a highly desirable evergreen shrub for the landscape.

The common name “Heavenly bamboo”, as the Chinese call it, makes an excellent background plant for foundation planting, as well as a good transition plant in front of leggy shrubs or low trees.

Then, too, its beautiful foliage is an effective foil for lower shrubs or flowering perennials.

But in a sunny location, for fall color, Nandina domestica leaves goes from purple-bronze to a bright red, bright crimson or rich, dark red during the cold months, adding spectacular beauty to the winter landscape.

When more than one plant is grown and cross-fertilization occurs, the loose clusters of creamy-white or light-pink spring flowers which are erect and terminal, are followed by large scarlet berries.

Heavenly Bamboo As A Hedge

For use as an informal hedge, either as a line or boundary marker or as background for beds and borders, this invasive species is equally useful. Pruning nandina will insure shapely plants, bushy to the ground, as well as keeping the hedge at the desired height.

It is not wise to plant this type hedge where a tall background is desired, because when allowed to grow above five feet, it is inclined to become leggy.

While nandina plants will flourish with a minimum of care, a little attention will give rewarding results. Almost any soil is suitable. Although, it prefers plenty of water and rich and well-drained soil. If the soil is alkaline, iron should be added.

Nandina domestica is evergreen, grows slowly and is a bit fussy about where it is placed. It likes shelter and partial shade, though berries and foliage color are better in sun.

Nandina is particularly suited to corners and is effective against a wall where it casts shadow patterns. Before placing nandina, you should know what you expect from this plant.

Know What You Want – Pruning

If a narrow slender shrub of the Nandina domestica is to be the result and the airy structural grace of each cane is required, reduce the number of stems by cutting some off at the ground. In this way individual character can be cleverly silhouetted. If a thick bush or a hedge is needed, all new bushy growth should be encouraged.

Pruning Nandina domestica plants should be done in the early spring, when the berries begin to drop and before the new growth starts. At this time some of the old, tall canes should be cut out completely, encouraging the new growth to come from the base.

Nandina is so usable and so popular it is carried by many nurseries. In the coldest sections or regions with harsh winters, it is partly deciduous even in sheltered spots.

Nandina will live if the temperature drops to 10° degrees Fahrenheit but will probably become defoliated. Although nandinas are frost and drought tolerant, a spring drought at the time the blooms are dropping and the small fruit are being set may cause you to miss the year’s crop of bright red berries.

The tiny green fruits are inclined to dry and drop off when there is insufficient moisture. So remember to water at blooming time if the weather is dry and you will almost always be rewarded with an ample supply of berries.

As a potted plant the delightful pattern of its stems and foliage can be shown to advantage. In this case use the dwarf Nandina varieties form known as “pygmaea”, which is carried by some nurseries.

In its native Japan and China, where it is called the sacred bamboo bush or true bamboo, Nandina domestica is often planted beside the entrance. If domestic trouble arises within the home, the matter is fully explained to the door-side shrub and the situation irons itself out. Hence the botanical name, Nandina domestica.

Propagation of Nandina bushes heavenly bamboo is very easy. The quickest method is by transplanting nandina runners or shoots which come up a foot or so from an established plant. Do it in the fall.

Growing the tiny plants from seed, however, is a very satisfying and fascinating project. I like to toss the berries (gathered after they have turned dark and just before they fall) under the light mulch around the parent plant. Then I leave them to care for themselves until they are large enough to transplant in the fall.

If a large quantity is to be sown, cover seed with about one-half inch of loose soil and it will germinate in approximately five to six weeks.

A light feeding of bonemeal and a shallow mulch of old compost is good for the young plants. Transplant in the fall, giving the same care as you would older plants, and you will have good-sized plants in a comparatively short time.

Birds Not Fond of Heavenly Bamboo

The red berry of this invasive plant (in some states) is among the few not relished by birds, so they are available for arrangements and indoor decorations. In addition nandina shrubs berry and the plant itself make outdoor eye appeal throughout the winter.

NOTE: Dozens of Cedar Waxwings were found dead in Thomas County, Georgia, USA, in April 2009 after eating toxic doses of N. domestica berries. N. domestica contains cyanide and is one of the few berries readily available in the region. [source]