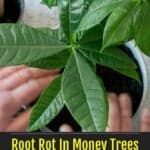 In the world of Feng-Shui, everything has a positive or negative effect depending on its placement or other factors.

While this might sound silly to some, a very similar form of association has long existed with plants.

Take, for example, the money tree.

Many plants are known as money trees, from the cacao tree (where the beans were once used as actual currency) to Pachira aquatica and Pachira glabra (legend has it, a man found the plant after praying for money and made a fortune from selling the seeds).

However, the most popular money tree is Crassula ovata, known as the jade plant.

This plant is low-maintenance and rarely gets sick, although root rot is a serious threat that can kill your money plant if not treated in time.

How To Fix Root Rot In Money Tree?

The key to defeating root rot is to catch it in time and avoid its causes in the first place.

Thankfully, an infected plant can usually be salvaged if treated before the rot advances.

Root rot strikes as a result of either improper care or cross-contamination.

The single greatest cause of root rot is watering issues.

You should only use the soak-and-dry method to water money plants and most other plants.

However, clogged or inadequate drainage holes, compacted soil, or using a too-big container can also stagnate water in the soil, which invites fungal infections (such as most forms of root rot).

Another common cause is cross-contamination, either by failing to sterilize your tools, infestations, or contaminated soil.

There are several symptoms to watch out for, and unfortunately, the early signs can indicate other issues.

However, you can usually use a process of elimination to confirm it is root rot before actually digging up the plant.

The first warning sign is when the leaves turn brown or yellow, and these damaged leaves may begin to wilt soon after turning.

You may also notice the plant’s growth has slowed down, but there are no exposed roots to indicate root-binding as the cause.

Stick your finger in the soil to test its wetness, as overwatering is the most significant cause of root rot in plants.

If the soil seems a little too damp, lean into the plant and sniff the soil to see if you detect a musty or moldy smell.

The final (and this should always be the final) confirmation symptom is to examine the roots themselves.

Never pull a plant out of the soil when you suspect root rot. But instead, top its pot and gently slide the plant out to avoid causing additional damage.

Healthy money tree roots will be white or near-white with nice, firm flesh when you squeeze or handle them.

However, plants with root rot will have gray, dark brown, or (if the root is dead) black roots that feel mushy and give off a foul odor.

Related: What Does An Underwatered Money Plant Look Like?

The good news is that root rot is fairly easy to treat if caught in time, and the process is nearly identical for all common types of money tree/money plant.

Using the process of elimination, examine the symptoms and rule out other potential issues.

This is not only important for treating the rot but will allow you to prevent future occurrences by eliminating the original cause.

Look at the roots and estimate the percentage of damage.

If your plant has less than 50% percent of its roots infected, there’s a good chance you can save it, while 50% to 75% percent will be a battle.

Generally speaking, if more than 75% percent of the roots are infected, it’s best to discard the plant, as few plants can regrow their entire rot structure.

You may also want to look at the foliage to see how extensive the damage is since most plants will have great difficulty recovering when they lose more than ⅓ of their leaves during their growing season (money plants can handle up to ⅔ defoliation).

At this point, do the following:

Next, take a look at the leaves and remove any heavily damaged, either by pinching or with sterile shears.

This will make your plant look better, but it will also allow the plant to distribute more resources to the healthier parts.

Money plants are somewhat tough, meaning a plant with ⅓ of the roots infected can have up to ⅔ of the leaves pruned away.

Remember, your plant will have a lot of trouble gathering nutrients, water, and photosynthesizing while it recovers, so don’t over-prune and don’t leave a lot of damage.

If you have a braided money tree, it’s not one but several money trees that have been trained together.

You can remove a damaged stem by gently unweaving it from the others and teasing the roots apart.

However, on a single-stem plant, any extensive damage to the stem means you cannot save the plant.

However, you might be able to harvest some healthy clippings to propagate new plants if the stem isn’t rotted up the plant.

Once you’ve finished removing all visible traces of root rot, you’ll need to ensure no bacteria or fungus remains.

This is a simple matter of dipping the root system in a solution of 1 part bleach to 10 parts water for 30 minutes.

Alternatively, many prefer to dip the roots in fungicide (although this won’t kill the less common bacterial root rot).

If you choose the bleach solution, you will need to let the root air dry for 2 to 3 days.

Choose a new container that’s an appropriate size for your plant and has adequate drainage holes.

To create an extra buffer zone, you may also wish to add a ½ to 1” inch layer of aquarium stones or gravel to the bottom of the container.

It’s possible to reuse the old pot if you soak it in a solution of 1 part bleach to 9 parts water for at least 30 minutes, but any old soil should be safely disposed of.