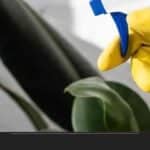 It seems like the same advice is given everywhere – if you have a tropical plant, you should mist it.

The advice seems almost universal, and many online guides tell you to mist “humidity-loving plants” by default.

But misting is not a universal necessity.

Misting isn’t always a good idea and can harm some plants.

Should I Mist My Plants?

The answer largely depends on the plant you’re thinking of, as well as the reasons for doing so.

Knowing which plants to mist and which ones to avoid can spell the difference between a happy houseplant and a sickly one.

Transpiration: That Thing Nobody Talks About

Chances are, you’ve heard of photosynthesis, but not about transpiration.

What is transpiration? It is a process that encompasses both how water moves through the plant and how it’s sweated out. That’s right, your plants’ sweat.

Generally, most plants are terrible at holding their water, and the plant uses only around 1 to 3% percent for photosynthesis and plant hydration – succulents being the main exception.

Through a complex series of cell interactions, the plant will compare the water content of the air to what it has inside.

If the humidity is lower, it will sweat water to raise the ambient humidity.

This process is vital to maintaining global ecologies and has a lot to do with why misting is so popular.

The Benefits of Misting Tropical Houseplants

Misting your plants can have two major benefits.

The first one is also the most obvious – it temporarily increases the ambient humidity, which encourages the plant to sweat less.

Most articles will tell you that misting builds the humidity level, but they don’t mention transpiration or the fact that misting only provides a temporary boost as the droplets evaporate.

The second benefit mainly affects plants with larger leaves, which is dust removal.

In theory, misting emulates rain, but in reality, it doesn’t clean as well as a neem oil shine and paper towel.

Still, it does help get some of the dirt off, which can improve photosynthesis.

Lastly, misting can help to cool a plant down on sweltering days, just like human sweat cools the body as it evaporates.

Is Misting Plants Even Necessary?

Misting is entirely up to you. While misting can be of some benefit, it isn’t the only option out there.

Pebble trays or humidifiers are often better options for humidity, as these add extra moisture to the air without getting the plant wet.

These are often better options than misting and should not be overlooked.

As for cleaning the leaves, a neem oil shine, as mentioned before, tend to work far better. Wiping with a paper towel or soft microfiber cloth will clean the entire leaf once sprayed. Commercial leaf shines tend to use oils that can clog pores and harm the plant.

One area where misting remains useful is for cooling a plant, but again, you have to be careful about when to avoid leaf scorch.

Indoors, this option is not so important, as you can change the temperature in the room (be sure not to let fans or air conditioners hit the plant, as many plants hate drafts).

The Other Downside of Misting

While misting can be good for some plants, it does come with a risk.

Misting your plants often may attract moisture-loving pests (and not just plant pests!) or increase the risk of fungal infections.

That’s not to say you should avoid misting purely out of fear of infections or infestations.

Instead, it’s a good excuse to spend a little time with your plants before each misting to check the leaves for signs of illness.

It’s good for your mental health, and your plants will appreciate the attention (and carbon dioxide).

When to Mist Indoor Plants

Something else that is rarely mentioned is that misting at certain times can be harmful, even on plants that like it.

Always mist in the morning or evening when the sun won’t be in direct contact for at least an hour after misting.

When sunlight hits a damp leaf, the water droplets act as mini magnifying glasses and can cause scorching to the leaf surface.

Misting well before or after noon gives the water droplets time to evaporate.

One thing to remember, you should be misting the undersides of leaves as well.

This can further improve photosynthesis and is less likely to scorch if the water hasn’t evaporated in time.

But also remember not to mist the soil, as this does nothing for the plant but can increase the risk of infestations, especially fungus gnats.

There are a lot of indoor plants and garden plants that will thrive on a good misting.

A good sampling of these include:

Plants You Should Never Mist

Succulents and plants with velvety or fuzzy leaves tend to be very sensitive to water on their foliage and should never be misted.

Some other plants that hate misting are: