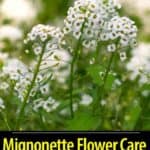 Native to Europe, southwest Asia, and North Africa, Reseda [res-EE-duh] a genus of herbaceous plants has a long recorded history.

The honey-like sweet fragrance emitted by its flowers is attractive to anyone near it.

Since the name Reseda means “to calm or appease,” the ambrosial scent makes complete sense.

The plant belongs to the Resedaceae family of plants.

Initially, the plants were considered to be an annual herb.

But since then, perennial and biennial forms of the Reseda plants have also been found.

The plants are not just beautiful to look at, but also make excellent cut flowers to bring some of their sweetness inside.

You may hear this plant called by its common name including:

Reseda plants have a relatively fast growth rate and don’t take too long to germinate and reach their full height.

The genus comprises 41 accepted species reaching a height of 1’ – 4’ feet.

The leaves can vary from species to species.

They grow from a basal rosette of foliage at the ground level.

The stem leaves then arrange spirally up the stem and are toothed or pinnate.

They are on the smaller side growing up to 6” inches in length.

Reseda plants have been grown as fragrant flowers for the garden since the early Victorian times.

The flowers on the Reseda species come in shades of green, yellow, and white with orange stamens.

They are produced on slender spikes and usually have 4 to 6 petals on each.

Each flower is pretty small i.e., roughly ¼ inch in diameter.

The most notable feature of the flowers is the fragrance emitted from them.

It’s described as ambrosial and can sweeten up any area they are planted in.

As for sunlight, they can grow in both full sun and partial shade areas in the garden.

The optimal temperature for most Reseda plants is around 70° degrees Fahrenheit (21° C).

Unlike some other perennial and annual species, the Reseda genus doesn’t do well in drought conditions.

It requires moist but well-drained soil.

Too much water or soils with poor drainage is harmful and cause root rot instead.

Even though Reseda plants are not too picky about soil, they do exceptionally well when the soil is rich.

If the soil isn’t rich, feed it once a month to add nutrients.

Reseda plants love soil rich with nutrients with a pH leaning towards the alkaline side.

The preferred pH for Reseda plants is between 6.0 and 8.5.

While the plants love enriched soils, they are not too choosy and can grow in other kinds of soils as well.

When it comes to moving plants, Reseda doesn’t transplant well.

It’s better for the plants’ health and growth to place them directly where you want them and thin them out when the seedlings are very young.

As mentioned before, Reseda plants don’t respond well to transplanting.

Hence, it is better you sow them directly at the location where you want to place them.

It’s important to pinch back the tips of young Reseda plant to promote branching and abundant flowering.

How to Propagate Reseda

Reseda plants are best propagated when grown from flower seeds sowed directly in the ground.

It will likely take about three weeks for the seeds to germinate.

Start the plants indoors, but the plant will do better when the seeds are sowed in the ground or wherever you want to stay permanently.

The disease is caused by soil-borne pathogens and is prevalent in tropical and temperate climates.

Use a pesticide to get rid of the aphids or consult your local garden center or nursery for a less harsh solution.

Despite the small stature of the Reseda plants, they are known for their ambrosial scent.

They have been used to make perfume, potpourri, and flower arrangements for a very long time.

In the Victorian era, the plants were very popular and they would grow mignonette in pots and window boxes, especially in the cities.

The use of Reseda odorata plants goes back further as people in the Roman times used it as a sedative and for treating bruising.

The roots of Reseda odorata species of the plant are used to obtain a yellow dye.

Now, the plant is still used for ornamental purposes and sweetening garden beds.

Its scent is still used to add ambrosial fragrance in various products.