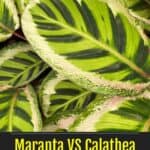 Maranta and Calathea are in the same plant family, Marantaceae. However, they are in different genera.

They require similar amounts of water and light. As a result, they make great companion plants, and both purify the air.

Maranta plants are native to tropical regions of Central and South America. There are about 40 species of Maranta.

Marantas are also known as prayer plants. This is because they perform nyctinasty or curling their leaves at night as if praying.

The most common Maranta is the Red Prayer Plant (Maranta leuconeura).

The leaves of Maranta plants have distinctive veins that look like they’re praying hands. In addition, the leaves fold up at night, which is why they’re called prayer-plants.

The leaves of the Maranta are primarily oval. They also grow in a different shape than Calathea and can perform well in a hanging pot.

Additionally, Maranta is slightly more tolerant of the cold than Calathea.

Calathea plants are native to South America and Africa. They tend to be a bit larger than Marantas.

The most common Calathea is the Zebra Plant (Calathea zebrina).

There are about 300 species of Calathea. They’re native to tropical Central and South America, Africa, and the West Indies.

The leaves of Calathea plants have beautiful, intricate patterns.

Some popular Calathea varieties include the following:

The leaves of the Calathea have varying shapes. These are lance-shaped, oval, or rounded.

Differences Between Maranta And Calathea

So, what’s the difference between these two popular houseplants?

While both plants are from the same family and have similar care requirements, the main difference is in their appearance.

What Is A Prayer Plant?

Prayer plants get their name from how their leaves fold together at night as if they’re praying.

The scientific name for prayer plants is maranta leuconeura, and they’re native to the tropical rainforests of Brazil.

Prayer plants are known for their striking patterns and colors on their leaves, which can be anything from green and white to red and black.

Prayer plants are low-maintenance houseplants that are relatively easy to care for. They prefer indirect sunlight and moist soil but can tolerate lower light conditions.

Prayer plants are also excellent air purifiers, as they can remove harmful toxins from the air, like formaldehyde and benzene.

What Is A Calathea Plant?

Like prayer plants, calatheas are known for their beautiful and colorful leaves.

Calatheas are also low-maintenance houseplants that are relatively easy to care for.

They are native to the American tropics, from southern Mexico to northern Argentina and Uruguay.

The best-known species is Maranta leuconeura, commonly grown as a houseplant in temperate regions.

Calathea is a large genus of tropical flowering plants belonging to the Marantaceae, native to the Americas. There are several dozen species in this genus.

They are easily distinguished from other family members by their zebra-stripe or pinstripe patterns on the leaves, which are caused by conspicuous venation.

In addition, Calathea plants are known for being finicky. Many species fold their leaves together at night or when exposed to bright light.