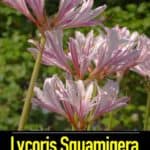 Lycoris squamigera, is a flowering bulb brought to America from Japan in 1898.

Lycoris belongs to the Amaryllis family, which includes the Snowdrop flower, Tuberose and Narcissus. The bulbs of Lycoris squamigera should be planted in the fall for blooming “Surprise lilies” in midsummer.

It is more commonly known as the:

The lycoris gets its name from the Nereids of Greek mythology – the fifty beautiful daughters of Nereus, a deity of the sea, and Doris, a half-human sea-nymph.

The Nereids were sometimes represented as half human, half fish, but at other times they were pictured as wholly human, wearing robes of pale, frothy green, riding on seahorses or other monsters of the sea.

Two high peaks rear themselves skyward in the Parnassus mountains of Greece. One of these peaks is called Lycoris, from its foot rushes the Castalian spring.

Since the Nereids were goddesses of water, one of these beautiful nymphs reigned over this spring.

The Japanese weave fanciful stories and record them with flower symbols.

Borrowing from Western lore, they likened a flower stem as it sprang from the earth, naked of foliage, to the Nereid nymph of the Castalian spring and named the plant Lycoris.

Growing The “Surprise Lily” A Fairy Princess Of The Flower Garden

Truly a fairy princess in the flower garden, Lycoris squamigera comes into bloom during the first days of August.

The bulbs, about the size of hen eggs, should be planted in September or October, with their brown paper tips just beneath the ground.

Theirs are the green leaves that appear in the spring along with the earliest jonquils.

The dark green, half-inch wide leaves come up from the bulb, like two folded paper fans facing each other, and attain a height of 8” to 12” inches.

The leaves die back during June and the gardener forgets their presence until all of a sudden – SUPRISE!

At the height of summer, the Lycoris sends up a large stalk with rose-colored buds, which reaches 28” to 34” inches and is in full blossom within a week.

As many as eight lily-like blossoms can burst forth, held high on the pale green scape.

The flowers are a delicate pink, tinted with lavender and are sweet-scented. They last for a length of time remarkable for so fragile and delicate a flower.

The Lycoris is hardy.

All it asks is to be planted in well-drained soil in partial shade, to be given plenty of headroom in the spring and not to be crowded when in flower.

Planted among the iris, it blooms while the iris leaves are ripening, which gives foliage to the Lycoris and blossoms to the iris plants again.

The Lycoris should have a background of foliage, for its delicate lavender-pink blossoms do not mix well with the more brilliant August annuals.

The plants and flowers seem to be immune to disease and the attacks of insects in my garden.

There are other Lycoris you’ll find in the garden. Lycoris aurea known as the “Golden Hurricane Lily” is one such species.

Below is a personal account of Lycoris aurea shared by Wyndham Hayward.

The old oriental Amaryllid, Lycoris aurea, came to us from China and Taiwan several centuries ago.

Eventually, it adapted itself to the lower south and became known as the golden hurricane lily around St. Augustine, Florida, where was common in old gardens.

There, during the September hurricane season, it is one of the most beautiful flowering bulbs in all the world.

Lycoris Aurea Hardy In The South

Lycoris is reasonably hardy in the southernmost states but can be grown in pots in greenhouses farther north.

The plant makes its foliage in fall and winter.

In late spring, the leaves die off, and the bulb remains dormant in the ground through all the warm, rainy season.

Then, in September, the equinoctial rains encourage the showy spikes of spectacular bloom to appear.

The latitude of northeast Florida seems ideally suited to tills bulb. It was here, in a garden in Monticello, Florida I observed some of the largest bulbs of Lycoris aurea I had ever seen.

They were nearly three inches in diameter.

The flowers of an old-time type of lycoris seen in St. Augustine has been slowly “replaced.”

Japanese bulb dealers back in the 1950’s began exporting to America stock of a variety of the species, possibly originating in Taiwan.

This “new” type is superior in many characteristics, such as greater vigor of stem and flower and wider petals.

The color is a rich gold, several shades lighter than the golden orange of the St. Augustine type.

Bulbs are available from bulb dealers online and in catalogs.