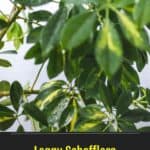 These plants, hailing from both Africa and Asia, as well as neighboring islands, are relatively easy to care for but do have a habit of becoming leggy if you’re not careful.

This is especially true of Schefflera that have a single trunk as opposed to multiple stems.

As the true beauty of Schefflera plants is in their foliage, straggly umbrella plant is something worth avoiding.

Why is My Schefflera Getting Leggy and How do I Fix It?

There are four main reasons for a Schefflera to become leggy:

All three are fairly easy to fix, but you might have to deal with a smaller plant for a while.

Sometimes an infestation of insects such as aphids, spider mites, Schefflera mealybugs, or infection can drain away vital nutrients, causing yellowing, leaf drop, and a plant to become leggy even though other conditions are ideal.

Giving your plant a periodical check-up will help you diagnose the symptoms and deal with illness before it has any major effect on the plant. Insecticidal soap can help control pests.

However, after eliminating the problem, a quick pruning of the damaged leaves will allow your Schefflera to redistribute its resources and develop a fuller habit.

Schefflera prefers rich, loamy soil that has a slightly acidic pH and is well-drained.

They can be fairly heavy feeders, so any old soil won’t do.

You can go with an orchid or African violet potting mix, amending with perlite and organic compost.

The plant will also thrive with a balanced liquid houseplant fertilizer once per month during the growing season.

Too little in the way of nutrients can lead to scraggly growth, but so can giving it too much of a good thing, especially nitrogen.

In the event, you have a regular trimming regimen and the plant is getting enough indirect light, you may need to test the soil quality and adjust your feedings applications as needed.

Also, remember that your Schefflera needs a break during the winter months. Feeding during this time can have a negative impact on the plant’s health.

Umbrella trees and their dwarf Schefflera cousins are known to thrive in artificial light, but that doesn’t mean that they – or other Schefflera, for that matter – don’t still need plenty of bright light.

Ideally, an indoor Schefflera should be getting at least 6 hours of bright, indirect sunlight per day. Low light will produce stretched, leggy growth

Outdoor plants will need dappled sunlight or a spot that has direct morning or evening exposure and some shade during midday to prevent scorching.

In both cases, make sure your plant isn’t exposed to direct intense sun, as this is when the rays have the least amount of atmospheric diffusion and can do damage as a result.

Schefflera houseplants are fast growers, and it’s easy to forget that they need pruning.

This can lead to the plant growing leggy, both in height and width.

Pruning Schefflera plants every year in late winter can help reduce the risk of the plant growing out of control.

As it has numerous growth nodes on each stem, you can plan where to trim so the plant will fill out to your liking.

Just be warned that a single-stemmed Schefflera will wind up with a tree-like growth habit, while multi-stemmed plants will fill out both vertically and horizontally like a shrub.

In the event of severe legginess, it’s possible to cut the plant back heavily without killing it.

In the case of multiple stems, you may need to cut back a leggy stem to 6” inches from the soil line. Use the umbrella tree stem cutting to start a new plant.

As long as the plant still has some leaves, the shortened stem will soon catch up in growth to its neighbors.

Taking care of a plant that’s grown leggy from a lack of care conditions is actually the same as if you forgot to prune it.

Keep in mind that these plants don’t generally branch where pruned, so cutting at a leaf node tends to result in a single new stem or branch as opposed to multiple ones.

Instead, your goal is to encourage leaf growth to fill out the plant.