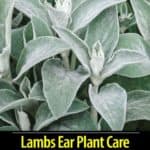 While the plant is native to Turkey, Iran, and Armenia, it is grown as an ornamental plant in most of the temperate regions of the world and has been naturalized in some areas.

Stachys olympica and Stachys lanata are the two other botanical names often used for this plant.

However, people know it as the lamb’s ears plant.

They are named so because of the curved shape of their leaves, which makes them look like ears.

Other common names of the plant include:

The plant also has several cultivars, the two most popular are:

Mainly grown for its velvety leaves which are densely covered with tiny and fine silver-white, fur-like hair, the lamb’s ears plant displays a spreading habit.

The height of the plant rises up to 12″ – 18″ inches during the flowering season when the plant produces racemes of magenta-pink flowers.

NOTE: The Rose Campion plant has fine hair on its leaves

The flowers are tiny and sessile (without pedicels) and appear in late summer or early spring.

While the flowers have an interesting fuzzy texture, they are insignificant and gardening experts recommend cutting them off to improve the plant’s vigor and to promote foliage growth.

In fact, it appreciates some light afternoon shade on very hot summer days.

However, too much shade is damaging to the plant.

The woolly leaves of the lamb’s ears plant have the tendency to trap moisture.

In the absence of sunlight or highly humid summer conditions, the natural process of leaf drying gets disrupted, making the plant susceptible to leaf spot and rot due to excessive moisture.

The green leaves may also lose their color in very cold weather.

Since excessive moisture is damaging for the plant, water the plant carefully.

Underwatering is better for lamb’s tongue plant than overwatering because it is drought tolerant.

Also, avoid watering from above as it increases the chances of leaves trapping too much moisture.

Jesus flannel doesn’t have very specific soil type requirements – it easily grows in average or even poor soil as long as it is well-draining.

Poorly drained soil makes the plant susceptible to rot because of excessive moisture.

It thrives in slightly acidic soil pH but grows well in all pHs.

If planted in fertile soil, the plant can spread aggressively.

When transplanting, it is important to leave adequate space around them as crowding affects air circulation, which then can have a negative impact on their growth.

Mulch the plant with a thin layer of compost, once a year in late spring, to promote new growth.

Woolly hedge nettle is an easy-to-grow and very low-maintenance plant.

Just keep removing damaged or faded leaves for a neat and tidy look.

Have you wondered: Is The Lamb’s Ear Plant Poisonous? We answer the Myth!

How to Propagate Stachys Byzantina

Lamb’s tongue plant self-seeds profusely as well as spreads by creeping stems, which develop roots as they move along the ground.

One of the reasons why gardeners like planting bear’s ear are because it is both rabbit resistant and deer resistant.

However, as mentioned above, the excessive moisture makes the plant susceptible to developing leaf diseases or even rotting.

Remove the damaged or diseased foliage as they attract sowbugs, which further damage the plant.

Due to its compact mound-like structure, lamb’s ear is widely used as a ground cover, border accent, and as an underplant for edging beds and softening hard corners and walks.

It is also considered a wonderful choice for rock gardens and works well as a border perennial and filler.

Woolly woundwort is also a great plant for children’s gardens because they are easy to grow, have a unique foliage color, and their soft, thick, and velvety leaves are fun to touch.

Apart from ornamental purposes, Stachys lanata is used as an edible herb in Brazil and for some medicinal purposes in some parts of the world.