The Himalayan Blue Poppy is part of the plant genus Meconopsis [mee-koh-NOP-sis] consisting of a little over forty species of flowering plants.

One of the most popular species is the Meconopsis Betonicifolia, commonly called the “Asiatic poppy.” Depending on the variety of this species, it’s also sometimes known by the following names:

The name “meconopsis” means “looks like a poppy” in Greek. It belongs to the Papaveraceae family which is commonly called the poppy family.

It has stunningly blue flowers measuring four to five inches across. However, the blue variety is one of the rarest of the Asiatic Poppies. 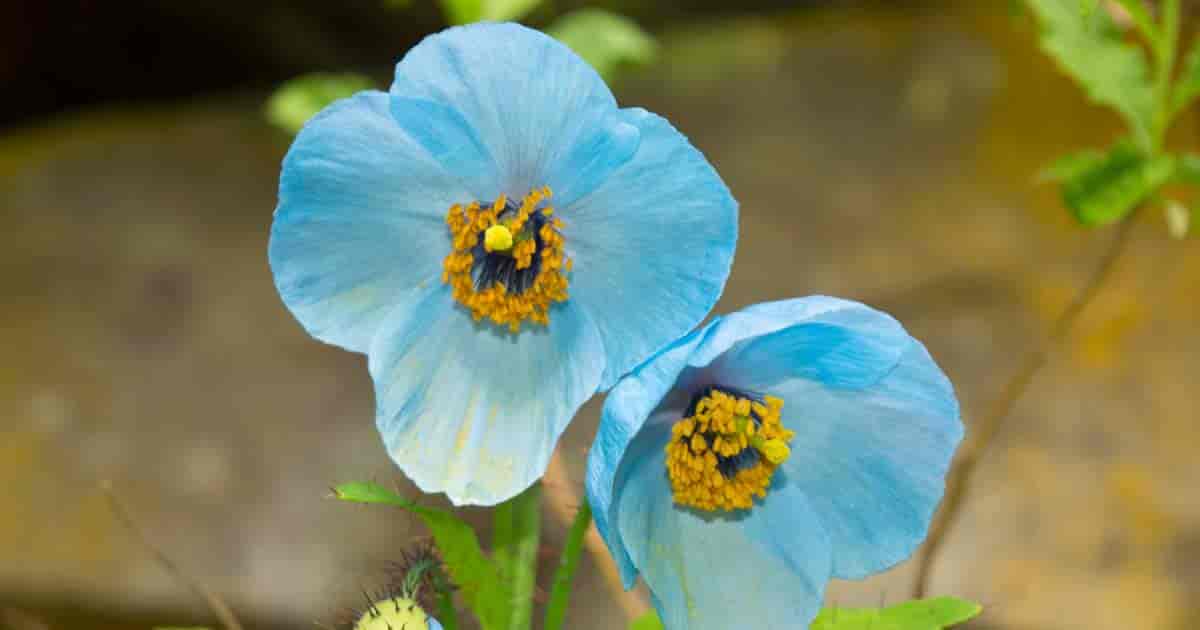 In fact, all varieties of Asiatic Poppies can be hard to obtain.

While it’s an attractive plant, it can be difficult to care for outside of its preferred climate. It’s native to Western Europe, including parts of the UK, and thrives in cool humid shade.

Asiatic poppies typically grow to about 16” to 48” inches in height with minimal spread.

Each blue poppy plant produces a cluster of branched stems with lobed or toothed leaves. They are also typically covered in soft bristles.

The Asiatic Poppy comes in a rainbow of colors. While the bright blue poppy is the most sought after, these poppies also come in various shades of red and yellow.

Meconopsis Betonicifolia typically blooms in the middle of summer for a short period. The plant also lacks any noticeable fragrance.

These poppies can be grown in partial shade to full sun. The main concern is wind, as it can break the long stems.

Meconopsis poppies prefers moderate, humid temperatures. However, they do not handle cold well. During the winter, plants may not survive freezing temperatures.

Water these Asiatic poppies frequently throughout the summer and less often during the winter.

Blue poppies should only be transplanted when you first get them home or when transplanting seedlings to their permanent home.

The Asiatic Poppy has a short lifespan and shouldn’t need transplanting each season.

Use a soil containing humus and provides fast drainage. You don’t want the roots sitting in soaked soil.

NOTE: Use sterilized potting soil to help reduce the risk of fungus that may attack seedlings.

The flowers and stems eventually start to fade on Meconopsis plants which typically only last one or two years.

However, clean up any dead leaves, flowers, or stems until the plant reaches the end of its life span.

How to Propagate Meconopsis

You can propagate the Meconopsis plants by collecting and planting the seeds.

Wait until the plant produces flowers and the flowers die off they should form a seed pod that slowly turns light brown.

By early May, the young poppies should be ready to transplant outdoors, unless you plan to keep them inside as houseplants.

Remember to keep taller varieties in an area shielded from the wind.

What Are the Main Pests or Diseases That Meconopsis Plants Face?

Asiatic Poppies are relatively easy to care for, with few threats. The two most common problems include aphid infestations and fungus.

Aphids can be rinsed away with a spray of water from a water bottle.

Fungus is more of a threat for the seedlings. As mentioned, using sterilized potting soil helps you avoid this problem.

Use these poppies anywhere you want to add a splash of color.

Whether you purchase the blue, red, or yellow varieties, the vibrant flowers instantly brighten any room.

Asiatic Poppies can be grown outdoors in moderate climates. However, they need protection from strong winds that may damage the plant.