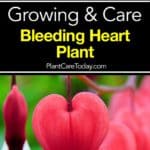 It doesn’t cost much to have beautiful, heart-shaped flowers decorating your house and brightening up the rooms.

Bleeding hearts were formally known as Dicentra spectabilis. The name was changed to Lamprocapnos spectabilis in 2010.

It has delightful, heart-shaped flowers measuring about an inch in size, displayed in rows of arching stems which proudly arch above verdant and inviting fern-like foliage.

The Bleeding Heart is classified as one tough plant according to the USDA (United States Agricultural Department). You won’t have to worry much about missing this colorful shade plant’s feeding time every now and then.

Do not confuse with the bleeding-heart vine (Clerodendrum thomsoniae) which comes from a different family.

A bit of shade, ensuring the soil has all the necessary nutrients and protection from the harsh elements is all you need to keep in mind when caring for the Bleeding Hearts.

Both plants are also considered hardy via USDA standards, so it’s simply a matter of preference on which colored blooms you prefer.

The soft, leafy green foliage grows in a mounding shape around 2′ – 3′ feet tall. The beautiful heart-shaped flowers emerge from the verdant foliage during mid-spring.

Each stalk holds a number of lovely flowers which line up in a row. The weight of the flower cluster causes the stalks to arch, lending more aesthetic appeal to the viewer.

You may see the Bleeding Heart “die out” during mid-summer, miraculously coming back to life during springtime!

If you have a traditional garden, plant the Bleeding Heart 2′ feet apart from each other starting in the early spring.

The Bleeding Heart bush is much like other herbaceous perennials in that it grows from underground roots in many seasons, but its specific life cycle is much more unique with other perennials.

Other perennials die back after the growth season, which is usually during early winter or late fall.

The Heart Flower plant dies right in the middle of summer after it produces its beautiful flowers.

After the flowers are gone, it lies dormant and returns to growing again in early spring or late in the winter, reaching maturity in 2 to 5 years.

Its rhizomatous roots form new shoots during the late winter or early in spring as the climate allows. The roots are rhizomatous, fleshy and quite thick. It stores nutrients that get passed on from one season to another.

Traditionally, its flowers are painted the color pink and white. There are a few bleeding heart varieties that deviate from the original hue. It also resembles the flowers of Dicentra formosa, also known as the pacific bleeding-heart plants.

The better the preparation, the more beautiful the heart-shaped blooms and the longer these blooms last!

They are a hardy bunch, the Bleeding Heart can survive direct sunlight in the winter as long as they are adequately moistened.

During summer, keep them well-shaded and away from the summer sun’s rays. You may also keep it away from strong winds and winter frosts as dictated by the seasons.

Regular fertilization is one requirement that’s needed by the Bleeding Heart plant during its growth period.

As the soft, fern-like foliage emerges, owners may put in time-release plant food or add compost around the soil to encourage its growth.

You may include general-purpose fertilizer during spring to provide the essential nutrients for your Bleeding Hearts growth. Add it in when you start to see shoots emerging.

You may prepare a mix of humus-rich, moist soil consisting of peat moss and compost in an appropriately-sized pot to accommodate the Bleeding Heart.

The soil and pot should have good draining properties before potting the plant. The “Dicentra spectabilis” may live in a pot with soil that is slightly alkaline.

Mix the compost well with the soil before planting. Mulch it occasionally, during fall and more during early spring time using, leaf mold or compost.

The bleeding heart is a herbaceous perennial, so don’t be surprised if your plant dies to the ground in the midst of the summer season.

Cut back the dead foliage, and allow further resting until the time to bloom comes again.

How To Propagate Bleeding Heart

Bleeding Hearts (Lamprocapnos spectabilis) can last for years and grow so much that it can cause overcrowding, especially when grown as potted plants.

You’ll need to separate and divide plants every 3 to 4 years as part of the propagation process.

Remember, Bleeding Heart flowers have quite a large network of thick roots, and you should take extra precaution in not damaging the brittle roots and the root ball while in transit.

There’s also the planting of the Bleeding Heart’s seeds as another way to propagate.

After that, you can put them in a room temperature of anywhere between 55° – 60° degrees until it germinates, which should take about 50 days maximum.

Lamprocapnos have no serious disease or insect problems.

They do suffer from occasional aphid attacks.

Neem is a good option for controlling aphids

Suggested Companion Plants For The Garden

Add some similar shade-loving plants which may remain green throughout the growth seasons, or put in some plants or ferns that complement the Bleeding Heart.

Hostas are low-growing perennials and are a perfect compliment for Bleeding Hearts. They come in a wide variety of different leaf shades and patterns, and are almost as hardy as the Bleeding Heart as rated by the USDA zones.

The Alaskan fern, Soft Shield Fern or the Polystichum setiferum, is also good companions for Bleeding Hearts, and they rate high in the hardy zones as well.