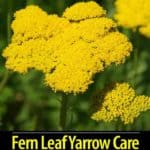 Now found in Europe, North America, and Canada, this herbaceous plant is native to the Caucasus, Iran, Afghanistan, and central Asia.

This particular species of the Achillea genus is one of the tallest ones and it’s similar to the Achillea millefolium (Common Yarrow).

The genus name references Achilles, the hero of the Trojan Wars in Greek mythology, who planted medicinally to stop bleeding and to heal the wounds soldiers.

It’s characterized by its long-lasting golden flowers and fern-like foliage.

An interesting aspect of the plant is it releases a spicy aroma when its semi-evergreen foliage is crushed.

Compared to other perennials, it’s a well-behaved plant which doesn’t overtake garden soils.

Positioned in a sunny location, it creates a bushy mound of fragrant flowers which thrive even in substandard growing locations.

The common names you may hear include:

This long-lasting foliage is dotted with clumps of tiny, bright yellow/golden flowers.

The plants bloom time is during early summer to early fall growing to impressive heights.

This plant has a fast growth rate, which means you will see it bloom not too long after you plant it in your garden.

Achillea is known for its bright flower color.

The stems are usually longer than the foliage and could rise above to 3′ – 4′ feet.

They start blooming early during the summer and lasts through the fall season.

They do extremely well when planted in sunny locations where they get light throughout the day.

The plant’s quite tolerable and hardy in USDA hardiness zones 3 to 9.

They are heat tolerant and grow in locations where summers are long and hot.

Make sure they get enough sunlight during the day to remain healthy for the growing season.

Fernleaf Yarrow has average water needs and can tolerate hot and humid summers.

It’s drought tolerant and can even moderately tolerate salt.

Since they prefer a drier climate, don’t overwater it.

Overwatering can lead to root rot and negatively impact the plant’s health.

Yarrow is favored because of its ability to grow beautiful flowers, even in poor soil conditions.

However, they do well when planted in well-drained soil with dry to medium soil moisture.

Unlike some other plants, avoid using heavily enriched and moist soils.

This can cause your plant to get leggy.

A mixture of average or sandy soil type with a neutral pH is sufficient for healthy foliage and flowering.

Although not necessary, deadheading is used to encourage further growth.

As soon as you see spent flowers, remove them.

It will promote lateral flower buds to be exposed and bloom.

Furthermore, cutting back the plant after initial blooming will also promote rebloom and extend the bloom season for the year.

Although Yarrow is not a spreading species, it does have a clumping habit.

Staking is necessary from time to time.

How to Propagate Achillea Yarrow

Yarrow propagates by seed and division.

If you’re propagating from seeds:

If you’re using the division method:

The diseases commonly found in Achillea include stem rot, powdery mildew, and rust.

Learn more on How To Get Rid Of Powdery Mildew

The plant is usually problem-free and even deer resistant.

The clusters of bright yellow flowers on Fern Leaf Achillea look striking when planted in groups or masses in garden beds or borders.