The bright coral-red flowers appear in long clusters, adding a splash of intense color to the yard.

The plant originates from Argentina, Brazil, Uruguay, and Paraguay. 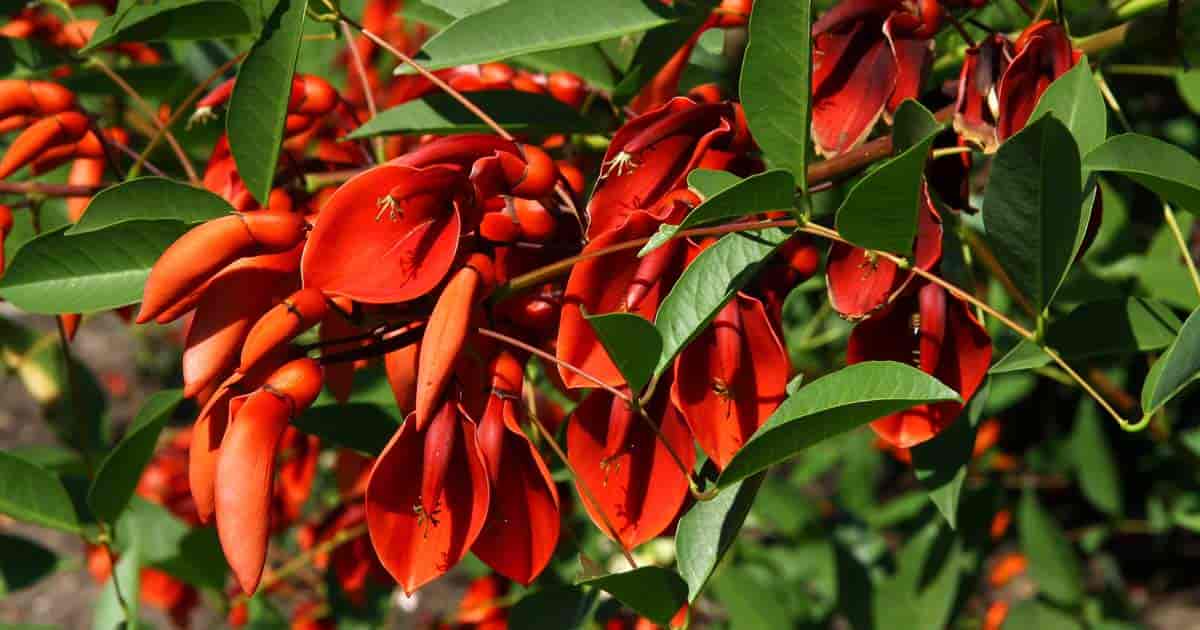 In these native regions, it grows to become a small tree, with a trunk measuring about 20” inches thick.

In cultivation outside of its native habitat, it typically dies back each year and is grown as a shrub.

Erythrina is part of the Fabaceae family, commonly called the pea or bean family.

It’s mostly known for its bright red flowers and goes by the common name:

While it’s easy to grow, it does need room and a large sturdy container.

The coral bush is a quick-growing plant that can reach five feet in a single season. It also achieves an equal spread.

It’s typically trimmed back to keep it at a manageable height.

When kept in containers, the plant may produce up to eight stems, with smaller branches containing three leaves. The leaves and stems are a dull green color.

The stems are relatively thick and typically require pruning shears or scissors to trim.

NOTE: Be careful when handling the stems, as they contain backward-bending thorns.

It’s a summer-blooming plant that produces coral-red flowers. These flowers only appear on mature plants.

It may take two or three years for the plant to start blooming.

The flowers appear in clusters and often last throughout the summer. After the flowers wilt, the seed pods appear, which are twisted around the coral bush seeds.

The flowers produce a light fragrance along with attractive flowers hummingbirds like.

For optimal outdoor growth, USDA hardiness zones 9 to 11 are best. In these regions, it can be planted outdoors in the early spring when temperatures exceed 50° degrees Fahrenheit.

While it can survive temperatures as low as 15° degrees Fahrenheit, the colder temperatures may inhibit the blooming of the flowers.

The plant thrives in full sunlight, but may not tolerate direct sunlight when grown indoors.

If the plant doesn’t get enough warmth during the winter, place it in a south-facing window.

Water the plant regularly during the spring, summer, and fall. Limit watering in the winter.

If the coral bush is kept in a container, watering may not be needed throughout the winter. Hold off on watering unless the leaves start to droop.

A small amount of plant food may be used throughout the active growing season. Use it sparingly, but regularly.

Repotting is also recommended each year before the active growing season starts. When the plant comes out of winter dormancy, repot it with fresh soil.

To manage the growth of the plant, trim it back at the end of the summer. Trimming it back and pinching the plant can encourage denser growth.

It’s also possible to thin the plant out. Cut back the newest shoots, trimming at the base.

The coral bush can be propagated with seed, stem cuttings, or division. Cuttings should be taken in the spring, preferably when transplanting the plant.

Divide the roots using a sharp knife, ensuring that each section has a healthy bud. Place each section in its own container with a mixture of regular potting soil and compost.

A mixture of one-third coarse sand and two-thirds potting soil may be used to improve the drainage.

The cuttings should take root within several weeks. Water the plants regularly and keep them in full sunlight.

Stem cuttings may be taken anytime during the active growing seasons. Use a sharp knife or scissors to remove a healthy shoot. The shoot should contain a portion of the root.

Plant the stem cuttings in individual containers and keep them near a window that offers full sunlight.

These plants should take root within four to six weeks, but will not bloom for the first couple of years.

Sow seeds in January. As they grow, move them into larger containers as needed.

Aphids and whiteflies may attack the plant in the summer.

To protect outdoor plants, remove the insects and flies as they are detected by spraying them with a garden hose.

When in full bloom, the coral bush instantly adds more color to the landscape.

Coral Bush can as a potted plant in a large container.

Place it ion a patio to help brighten the space. Just remember to give the plant plenty of room to grow.