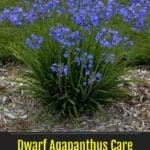 Sometimes Agapanthus cultivars become more famous than the species itself.

In the case of perennial Agapanthus africanus (ag-uh-PANTH-us af-ri-KAH-nus), a member of the Amaryllidaceae family from South Africa and its many dwarf cultivars have become some of the most famous examples of agapanthus out there.

Agapanthus africanus, often called lily-of-the-Nile, can be more challenging to grow than other agapanthus plants, but the dwarf versions are far more tolerant.

Currently, dwarf agapanthus varieties are grouped according to the color of their blooms.

The cultivars with blue flowers include:

The white cultivars include:

Oddly enough, two of these cultivars are almost as large as the parent plant, with ‘Dwarf Blue’ measuring 24” inches and the most famous dwarf, ‘Peter Pan’ coming in at 20” inches tall.

While lily-of-the-Nile grows to about 27.5” inches tall, most of its dwarf cultivars range from a minuscule 6” inches to 15 ¾” inches tall.

These plants grow in clumps with attractive, straplike green leaves that reach a little over half the plant’s maximum height, with flower stalks reaching the rest of the height.

Many dwarf cultivars are evergreen, although some are deciduous.

As mentioned, dwarf agapanthus is often divided into white-flowered cultivars and blue ones.

Of the blue ones, the exact color varies by cultivar:

All dwarf cultivars have trumpet-shaped showy flowers that appear from mid-spring until autumn, depending on the climate and other environmental factors.

As these plants will naturally angle themselves towards the sun, be sure to plant them in a spot with southern exposure or rotate their containers occasionally

Coming from a generally hardy species, almost all dwarf agapanthus plants are cold hardy down to 10 or 20° degrees Fahrenheit and well-suited for average household temperatures.

Outdoors, most dwarf agapanthus plants will grow in USDA hardiness zones 6 to 11, but a few are best suited to zone 9 or 10 and up.

Water using the soak-and-dry method, checking the soil with your finger and water only when the soil is dry 1″ to 3” inches down (or approximately ⅙ of the expected mature height of your plant).

Pour slowly and evenly, stopping when water seeps from the drainage holes.

Cut back on watering in autumn and skip in winter while the plant is dormant.

Feed your dwarf plant a balanced liquid houseplant fertilizer, diluted according to the packaging, early in the morning, once in spring, and once in summer.

Avoid high nitrogen content, as this can hinder flowering.

Due to their lineage, dwarf agapanthus plants thrive in sandy or loamy soils but can thrive in clay soils as long as the soil is well-draining.

Most household potting mixes will work well, although you may wish to add perlite to ensure good drainage.

Outdoors, add a little organic compost in the spring and a protective layer of mulch before the first frost.

For the northernmost regions, it’s not an uncommon practice to excavate the bulb in autumn and overwinter it indoors, as a decent frost can damage the bulbs.

Container specimens will generally need to be repotted every 1 to 2 years in the spring.

These plants enjoy being slightly rootbound, so only graduate to one container size larger as needed and provide fresh soil during the repotting process.

Deadheading is a matter of personal preference with agapanthus, as the spent flowers will usually remain attractive long after the end of their lifespan.

Others prefer to deadhead for the chance of heavier blooms the following year.

Prune away damaged or diseased leaves as needed, and reserve any heavier pruning for after the flowering season has ended.

How To Propagate Dwarf Agapanthus

As these dwarf plants are cultivars, propagating through seeds can be difficult.

Instead, the most common propagation method is through division, usually every fourth year in the spring or during repotting.

These plants tend to be highly resistant to pests and disease, with mealybugs, slugs, and snails being the most common infestation problems.

Rust, grey mold, and root rot tend to be the most common diseases.

Meanwhile, these plants are highly resistant to rabbits and deer while attracting bees, birds, butterflies, and hummingbirds.

While rarely showing up on lists, the rhizome of agapanthus plants is considered toxic and can lead to severe symptoms in both humans and pets if enough is ingested.

The sap is also known to be a skin irritant to sensitive individuals.

Thanks to their smaller size and attractiveness even when not in bloom, dwarf agapanthus is perfect for a wide range of indoor/outdoor settings and garden themes, including: