Dryopteris Filix-Mas (dry-OP-ter-iss, FY-liks mas) is a beautiful semi-evergreen wood fern, native to the Northern Hemisphere, in the Dryopteridaceae family.

Native to much of Europe, Asia, and North America, its big triangular fronds are of light green shade and can create a sizable clump. 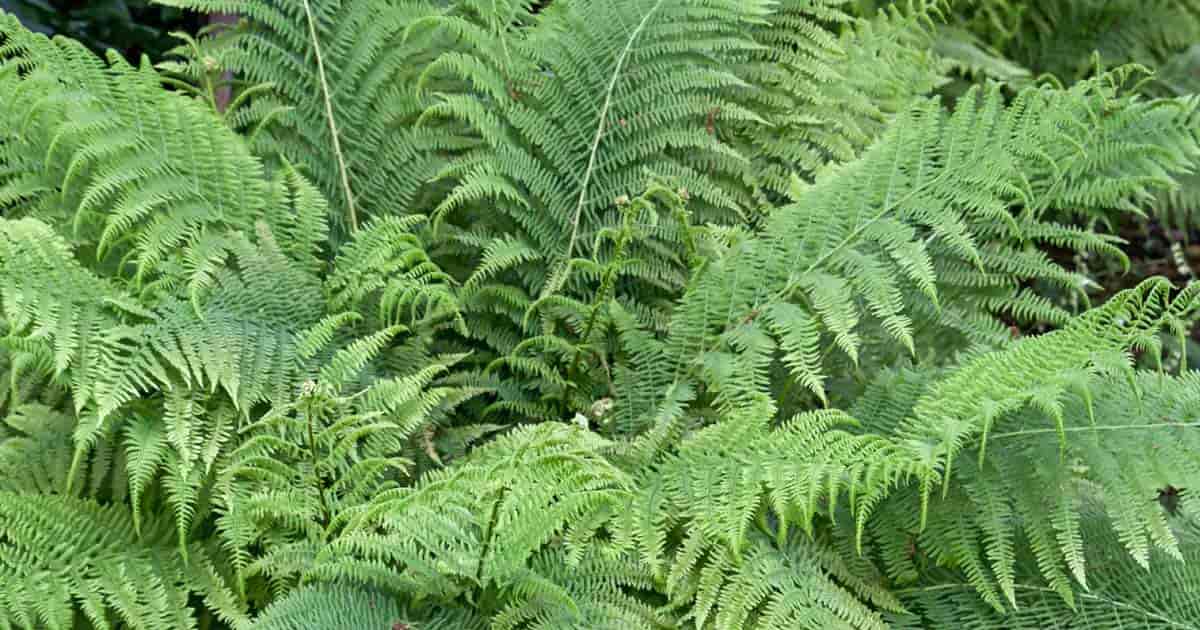 This plant is well-behaved and doesn’t spread too much.

It is ideal for every type of garden, can tolerate almost all soils, and can thrive in hedge bottoms and other such places.

During spring, the plant sprouts new fiddle necks right from the collapsed fronds which endured the harsh winter weather.

Other than its botanical name you may hear it called by its common names including:

This is a big deciduous, arching male fern, which has stout, erect rhizomes and green blades, called fronds, which can grow about 3′ feet tall.

Each frond is pinnate-pinnatifid with 10 to 30 pair of pointed pinnae leaflets on each side of the rachis.

These leaflets are divided into rounded, short, finely-serrated pinnules (sub-leaflets).

The leaves taper at both ends, with the basal pinnae about half the length of the middle pinnae.

All the leaflets are further divided into finely-serrated, rounded, and short sub-leaflets.

This is a non-flowering plant.

Place it outside in the sun during the afternoon while keeping it in full shade during the rest of the hours.

It means you must ensure it receives a good supply of water. It also can tolerate drought.

It is best to water it once every week but make sure to allow the soil to dry slightly between watering.

Since this plant likes high humidity, use hand misting.

Fertilize this plant once every two weeks, and alternate between seaweed and fish fertilizer.

It is recommended you decrease the fertilizing and watering during the winter season.

This plant can easily grow in well-drained and average moisture soils.

The soil mustn’t be completely dried out.

The ideal type of soil for this plant is clay, sand, and chalk soil with alkaline, neutral, and acid pH.

It is recommended you plant it during spring or fall seasons and avoid high temperatures and frost spells.

Utilize sufficient potting soil and mix it with the earth.

You should also add some clay pebbles at the bottom for enhanced drainage.

This plant is easy to grow in lightly shaded, moist, and mostly cool sites.

It will properly grow in full sun with adequate moisture.

It can withstand dry shade, but you must regularly water it during its first season while also making sure to mulch it properly.

Make sure to mulch around the plant with plenty of dead leaves during the fall season to assist in conserving moisture during the summer.

Place this plant in a location, which is secured from strong winds as they could damage its fronds.

The crowns have to be divided regularly, as well as any damaged or dead foliage.

How To Propagate Male Fern

This plant is propagated by sowing spores during spring, or any season in the greenhouse, once they have ripened.

Also propagate it by using spores by division.

Surface the sow on sterilized compost and ensure it’s moist by keeping the pot inside a plastic bag.

It can germinate in one to three months at a temperature of 68° degrees Fahrenheit (20° C).

Begin to pot up the plants once they grow big enough to manage in a shady area of a greenhouse till they grow more before planting them out.

If there are big clumps, they’re often directly replanted in their permanent positions, although it is ideal for potting small clumps and helping them grow in a cold frame until they begin to properly root.

Spring is the best time to plant them.

It is ideal to have a space of about 23” inches between each plant.

Typically, Dryopteris Filixmas can grow without any trouble and free from pests and disease.

They might be eaten by deer and rabbits in rare occurrences.

This plant doesn’t suffer from sap-sucking insects like aphids.

If the plant grows dense, there might be some leaf spotting, but it is cured by removing dead fronds and maintaining better plant hygiene habits.

It is also best to be on a lookout for mealybugs, root rot, and brown scale.

This plant looks great in flower beds, borders, and other garden uses.

Dryopteris Filix-Mas goes well with Hosta and the majority of the shade-loving perennials.

They are useful in mixed containers and tubs as well.

It works great as a ground cover plant.

The compost of this plant is useful for tree seedbed as it enhances the germination.

Its ashes are loaded with potash and are utilized in creating glass and soap.

While it is deciduous, the decaying green fronds of this plant are used as a weed-suppressing mulch.