The Dragon Lily – Dracunculus Vulgaris [drak-UN-ko-lus, vul-GAIR-iss] is a member of the Araceae family (Aroid – Dieffenbachia, Syngonium) native to the hillsides and rocky areas of the Balkan region, extending as far as Crete, Greece, Aegean Islands, southwest Anatolia, and the Mediterranean.

The deciduous tuberous perennials plant has also been introduced in North America, including parts of Canada and the United States, and northern Europe. 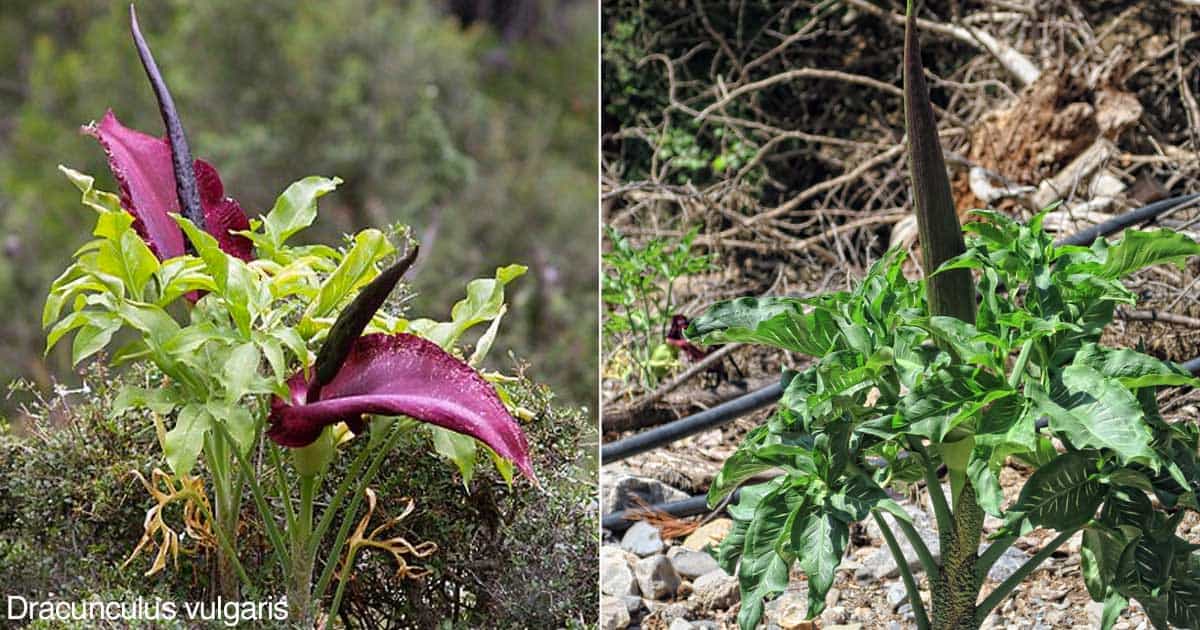 Despite the fact the stalks of the plant usually have only two to four leaves on the top, the foliage of Dracunculus vulgaris is very attractive mainly due to its dark purple color leaves.

In Greece, it is called drakondia because of its unique shape, which gives the impression a small dragon is hiding inside the spathe.

You may hear it called by its common names including:

The solitary, robust herb grows up to 6.5’ feet in height.

The dark purple colored pseudostems are stout and long and range from 1.5’ – 5’ feet in size.

The leaves are dark-green, erect, and fan-shaped and get as big as 18” inches.

The leaves usually die during the blooming season.

Autumn and spring are the best seasons to cultivate “stink lily” vulgaris.

It can take 2 to 5 years to reach the maximum height.

The inflorescence of black dragon lily is a long, black-colored appendage, called spadix, enclosed in a large deep purple colored bract, known as a spathe.

The black spadix can grow up to 4.5’ feet, and the spathe can reach up to 4’ feet, but in most plants, the inflorescence does not exceed 18” inches.

While the spathe and spadix look like a flower, it is an inflorescence.

The actual flowers are hidden inside the bulbous chamber within the spathe.

When the inflorescence reaches the mature stage, and the plant is ready for pollination, it emits a strong, nauseous smell similar to rotten meat; a characteristic common among the plants of Araceae family.

This is to attract potential pollinators, which are mainly flies. However, the smell only lasts for a day.

Each inflorescence contains both male and female flowers; female at the bottom and male at the top.

The black arum blooms in early spring or summer and dies soon after flowering.

Dracunculus prefers full sun, but it can tolerate partial shade as well.

In winters, it needs to be protected with dry mulch.

The best plantation sites are open glades in sheltered woodlands and the bases of sunny walls.

While it prefers the water, it can withstand drought as well.

To ensure fast growth, add a significant amount of organic materials, like decayed compost, in the planting site.

Like all members of the Araceae family, the plant prefers humus-rich, moist and well-drained soil of neutral pH.

But, it can tolerate a wide variety of soils, such as clay, sand, chalky or loamy soil.

Dragon lilies are an easy-to-grow plant and require no pruning.

How to Propagate Dracunculus

Autumn and spring are the right seasons for separating the bulb offsets.

The flowers may not appear for the first couple of years after planting, but if the plant is alive, a leaf will appear.

Dragon lilies are not susceptible to diseases or pets.

Dracunculus vulgaris is toxic for animals, but they stay away from the plant because of the strong smell.

The dragon lily relies on flies and other insects for pollination, and therefore emits putrid dung and carrion-like smell, to attract them.

The fruits (along with the seeds) and tubers of the plant have long been used in Turkey to treat hemorrhoids and rheumatism, respectively.

The root of the plant is known to be a skin irritant and is toxic.

According to folklore, the leaves or roots of the plants can offer protection from serpents and vipers.

Traditionally, the leaves of dracunculus vulgaris were wrapped around cheese to preserve it.

Legend has it washing hands with a liquor made from this plant enables a person to handle snakes with impunity.

Because of their beautiful colors, some people grow dragon lilies in their gardens to enhance the aesthetic appeal.

However, they should not be planted near sidewalks, doors, or windows due to the foul smell it gives off during the blooming season.