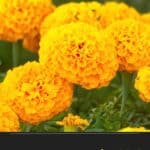 Do deer eat Marigolds? The answer may surprise you.

It turns out that marigolds are a natural deterrent against deer. Deer have a keen sense of smell and tend to avoid eating marigolds because they have a strong fragrance that deer are sensitive to.

So while you may not find it ideal, the key to keeping deer out of your garden might be to make it unattractive to them by changing its aroma.

Deer are herbivores, but that doesn’t mean they’re always herbivorous.

Do deer eat marigold plants if nothing else is available?

They will eat just about anything they can find to survive, and sometimes they’ll even eat things that aren’t food.

This is especially true in the wintertime when their normal diet of grasses and shrubs isn’t available.

Marigolds have been used for years as a natural deterrent against deer, but why do they work?

The answer is simple: marigolds taste bad to deer. They contain an organic compound called Pyrethrum, which is toxic to insects and tastes bitter to deer.

This compound repels flies, mosquitos, and other insects and is also found in Chrysanthemums.

It is not toxic to humans or deer, though.

Deer Are Sensitive to Smells

Deer typically avoid eating flowers that are strongly scented because they can taste them through their nose.

They have huge nostrils and no nose hairs to impede scent. Instead, they use their sense of smell to stay ahead of predators, receive information, and avoid toxic plants.

That is why Whitetail deer frequently lift their heads and sniff the air.

Not only can they smell territory markers of other deer, but they can also smell a predator or human from 500 feet away.

Deer have 300 million scent receptors, whereas dogs have only 220 million, and humans have only 5 million.

Basil is another herb that repels rabbits and deer.

It grows well in full sun or partial shade, but it needs regular watering during its first few weeks after planting.

Once established, it tolerates dry conditions well because it doesn’t require frequent watering (although it will benefit from occasional watering).

Basil grows up to 2′ feet tall and thrives in warm climates with hot summers but does poorly in cold winters.

Dill is another herb often planted near lettuce because it helps repel pests such as aphids and cabbage moths.

It also makes an attractive addition to salads or soups. Dill grows best when planted in the spring or fall but can tolerate dry conditions once established.

Once established, it self-sows freely, so you won’t have to worry about re-planting it yearly!

Deer don’t like the smell of lavender, so it makes an excellent addition to your garden.

Lavender has a sweet fragrance that helps attract beneficial insects to your garden.

It also repels mosquitoes, so it’s great for those who don’t want to be bothered by bugs while enjoying their time outdoors.

Daffodils are another great choice when planting bulbs because they’re easy to grow, and deer don’t eat them.

They also bloom early in the spring before most other flowers come up, which gives them an advantage over other plants since there aren’t many other flowers around that time of year.

How To Make Your Garden Unattractive To Deer?

The best way to keep deer out of your garden is to remove the things that attract them in the first place.

If you remove the food source and make your garden unattractive, there’s no reason for the deer to stick around.

You can make your garden area less appealing by using one or more of these methods:

To keep deer away from a specific garden area, you should plant marigolds, daffodils, or lavender around the perimeter or its border.

Planting them around shrubs and fruit trees will help camouflage their smell.

The smell that marigolds give off when crushed can deter deer from entering your yard because it’s similar to the scent that deer leave behind when they’ve been in an area for a long time.

Deer dislike the smell of these plants, which are easy to grow in containers or directly in the ground around your home or garden.

Deer do not like spicy, citrusy, or sweet smells, but butterflies and bees love them.

So, to deter deer naturally, planting flowers and vegetables is known to be unappealing to them.

You can also use fencing to protect your garden from deer, such as a fence made out of chicken wire or another type of fencing material that they cannot get through easily.

Mesh fencing may also be effective at keeping deer out of your garden. Just make sure the fence is between 6′ and 10′ feet tall.

No, deer do not like Marigold plants due to their strong fragrance. Marigolds are members of the Asteraceae family, like daisies.

Many of the plants in this family have a strong odor that deer do not like. This scent may be what keeps deer away from these plants growing in your garden.

2. Do Deer And Rabbits Eat Marigolds?

Rabbits love Marigolds, but deer do not. To keep both deer and rabbits out of your garden, use wire fencing to barricade your garden area to keep animals out.

3. Is It Possible To Deter Deer Without Using Chemicals?

Yes, it is totally possible to deter deer naturally by growing plants that deer don’t like or using a natural homemade deer repellant.

Anything with a strong odor like vinegar, garlic, and hot sauce can be added to a spray bottle with water and sprayed on flowers that deer might eat.

They won’t like the smell or taste and may avoid that area in the future.

You can have the garden of your dreams while enjoying the wildlife around you.

With a little planning and creativity, you can keep deer out of your garden without using chemical repellents or other harsh methods.