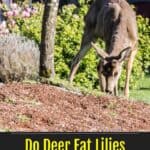 Lilies are a complicated subject to talk about because they’re one of many plant types whose name isn’t exclusive to a specific genus. For example, true lilies belong to the genus Lilium, yet many of the most popular lilies out there are from other genera.

While this certainly can complicate care needs if you aren’t familiar with what kind of lily you have, it can also impact your entire garden.

A perfect example of this is regarding deer. Some sources say lilies are deer resistant, while others say they’re a favorite snack.

So what’s the truth, and how do you ensure your lilies are safe? Let’s look at this question and get into some important specifics.

Yes, and sometimes, yes. It really depends on the species or cultivar.

And this is where we need to look first at what “deer resistance” means, as well as when a lily is or isn’t resistant, instead of lumping all lilies together.

Understanding The Concept Of Deer Resistance

There’s a common misunderstanding that deer resistance equates to being deer-proof. But, unfortunately, no plant is deer-proof, and a hungry enough deer will risk life and limb to eat whatever plant is available, even if they know it’s toxic to them.

Rutgers University addressed this problem some years back and devised four categories to describe how likely deer will attack a plant under normal circumstances.

The categories are as follows:

It was discovered that many factors affect how likely a deer is to nibble on a plant. For example, they prefer herbaceous plants over woody ones, plants without thorns or spines to those with, and unscented or mildly scented plants over those with a strong odor.

Companion planting (AKA complimentary gardening) is a great way to change how attractive a plant is, and we’ll discuss this in more detail later.

Cornell University has also found that plants that have been irrigated or fertilized are more attractive than unfertilized or unwatered plants.

Not All Lilies Are Equal

But what about other plants known as lilies?

They’re often referred to as monkey grass or lilyturf and are usually ignored by deer. While bearing little resemblance to true lilies, they have blooms, not unlike the lily of the valley, and are sometimes used in conjunction with other lilies.

Obviously, lilies are often a preferred snack, and therefore, you’ll want to protect them.

But what do you do if you aren’t able to build tall fences or otherwise physically block deer from reaching the plants? The answer is in companion planting.

This technique pairs up two or more types of plants that have similar care needs and benefit each other.

Alliums are a popular plant that can help repel deer with their strong scent.

When planning your garden, choose a mix of deer-resistant plants and use those for your border.

Place more vulnerable plants behind the border so the deer will have to move past the plants they don’t like to get to the tastier ones.

One good example is to blend liriopes and alliums along the border, with a second row of bigger deer-resistant plants and your most vulnerable lilies at the back.

The strong sulfuric smell of the alliums will assault the deer’s sensitive nose and mask more attractive odors.

On top of that, the less interesting liriope or woody plants will help draw attention away from the tastier treats behind them.

You can still mix and match so plants visually complement each other, making this one of the best ways to minimize the risk of your plants being attacked.

Just be warned, a starving deer will eat just about anything, so this method isn’t foolproof.

If you live in an area where deer are a particular problem, consider using predator urine crystals, fencing, and other deer deterrents to increase the safety of your plants further.