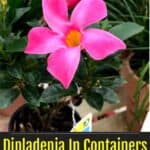 There’s an often frustrating trend in the plant world where individual plants – and sometimes entire genera – get reclassified. Such is the case for the genus Dipladenia (dip-la-DEE-nee-uh), which is now considered part of the Mandevilla genus.

Both share the common name of rock trumpet, although Dipladenias are sometimes referred to as Brazilian jasmine and funnel flower.

However, there are plenty of differences in growth and appearance between these two former genera, so most growers still count them separately.

For example, Mandevillas are climbers with a vertical growth habit and larger leaves, while Dipladenias are bushy with smaller leaves and tend to hang over the edges of containers.

And speaking of containers, Dipladenias grow best in containers, with a limited outdoor growing range in the US.

These perennial members of the Apocynaceae family hail mainly from Brazil but share much of the same territory throughout parts of South and Central America with mandevillas.

As mentioned, Dipladenias have a cascading growth habit. They start growing vertically until the weight causes the stems to droop, leaving them at the height of only 1 to 2’ feet in most cases.

You can also use pruning to train your plant into a bushier growth habit with a potential spread of 2’ feet.

The big draw to this plant is that it can overhang its container, but you can also train it to climb using a trellis or similar support, making this an incredibly versatile plant.

Dipladenias have smaller, pointed ovate leaves that tend to be a darker shade of green with satin to semi-gloss finish (mandevillas are lighter and glossier).

These plants are known for an incredibly long bloom when given ideal conditions.

Unlike mandevillas which tend to bloom from June through October and are primarily red, Dipladenias can bloom from March to November.

These flowers are smaller trumpets in pink, red, white, or yellow.

You’ll want a sunny window for your Dipladenia, as these plants need 6 to 8 hours of full sun daily to maintain all those flowers.

If you live in a particularly hot region, put the plant in a window that faces east or west to catch the mild sunlight and shield it from the midday sun.

Remember, windows intensify the sun’s rays, which can be good and bad, depending on how far south you are.

You’ll want to give these plants a humidifier or pebble tray, as they function best in 50% to 60% percent humidity levels.

However, it can grow in 40% to 70% percent humidity without becoming stressed. Avoid going above this, or it could invite fungal infections.

You can take your plant outside during summer if you first harden it off.

At night, 65° degrees Fahrenheit is a perfect low, but anything below that can cause the plant to become sluggish or even go dormant.

As this is a tropical group of plants, they’re extremely sensitive to cold, and temperatures of 45° degrees Fahrenheit or below can harm or even kill a Dipladenia.

Finally, avoid placing these plants near sources of sudden temperature changes, such as air conditioners or radiators.

Strangely enough, Dipladenias can be somewhat drought tolerant, making them more forgiving if you’re a little late watering them.

Depending on your chosen growth habit, both the bottom-up and soak-and-dry methods work well for this plant.

Test the soil occasionally by sticking your finger straight into it and watering when it feels dry 2” inches down (approximately to the second knuckle).

The soak-and-dry method is easiest when the plant isn’t concealing the soil.

Here’s how to do it:

As for the bottom-up method, you can sit the container in a shallow pan of water.

Allow it to soak for about 20 minutes, adding more water to the tray as needed until the soil surface feels slightly damp.

There’s a bit of debate regarding just how much fertilizer to give Dipladenias, but the general consensus is a water-soluble 10-30-20 NPK fertilizer every 2 weeks during the growing season.

You’ll want to provide your Dipladenia with a well-draining sandy to loamy soil.

Possible amendments are peat, coarse sand, or perlite, and an African violet mix with a little perlite or vermiculite works great.

You will also need to repot your plant every 1 to 2 years to ensure it has fresh soil or if it shows signs of becoming rootbound.

If rootbound graduates to one container size larger and avoid fertilizing for one month while the plant acclimates to its new pot.

You won’t have to do much with this plant beyond pruning away dead or diseased portions as needed.

However, deadheading is common and can often result in even fuller growth.

In addition, you can pinch new growth a few inches above a leaf node to obtain a bushier appearance.

Seed propagation is fairly simple, although deadheading will mean the seed pods won’t have a chance to develop.

As a result, stem cuttings tend to be the most popular propagation method, followed by air layering.

Before propagating your Dipladenia, check to make sure it isn’t a patented cultivar, which cannot be reproduced legally without the patent holder’s consent.

While not drought-hardy, Dipladenias can tolerate brief periods of dryness.

However, this tolerance means the plants are more prone to moisture-related infections such as botrytis, fusarium wilt, leaf spot, powdery mildew, and root rot.

Aphids, mealybugs, and spider mites are the most common pests.

Dipladenias are non-toxic to both humans and pets, but the milky sap these plants produce can be an allergen for some people, so it’s best to wear gloves when handling.

These plants are smaller and more compact than mandevillas, making them a great accent for tables and shelves.

They’re also quite popular in hanging baskets, where the blooms can cascade down the sides.

In warmer months, you can bring your Dipladenia outside to bring color to a deck or patio.

You can even train them to climb a trellis, although they won’t reach nearly the same height as a Mandevilla.