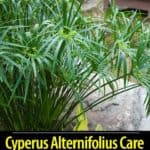 Cyperus alternifolius [sy-PEER-us, al-tern-ee-FOH-lee-us] is one of the most popular houseplants from the sedge family Cyperaceae.

But, it has also been naturalized in many tropical and sub-tropical regions of the world, such as the southern USA, New Zealand, many Pacific Islands, and many parts of Australia.

You may hear it called by its common names including:

The green-colored leafy bracts grow into a circle looking like an umbrella.

This is why the plant is commonly referred to as an umbrella papyrus plant.

The leafy bracts are often confused for leaves, but the true leaves of the plant are located on the lower side and cover the bases of the stems.

The leaves of the umbrella papyrus plant are also reduced to long sheaths.

The flowers grow in dense clusters at the tip of the stems, between the leafy bracts.

They are initially green but turn brown when they get mature.

While it can grow in full sun, the harsh sun rays can cause scorching of the leaves.

Since cyperus papyrus is a semi-aquatic plant, it requires an adequate amount of water for proper growth.

This is why it is often grown as a pond plant.

Even in its natural habitat, the plant is usually seen growing at damp sites, near waterways.

When grown as a houseplant, the best way to ensure the plants’ water requirements is to place the pot in a plate or bowl filled with water.

The plant doesn’t mind getting a bit submerged in water.

Fertilize the plant once a month, during active growth.

While Cyperus involucratus is easily grown in the regular potting soil, it thrives in rich peaty soil containing 2 parts moss to 1 part sand to 1 part loam and is wet and boggy.

Since this cyperus plant cannot tolerate cold weather, it should be transferred to pot before the first frost in fall and kept indoors during the winters.

When grown in pots, the plant may need to be repotted to larger pots once a year.

Grows well in both standing water (up to 4” inches) and in bog plant soils.

Umbrella Cyperus is an easy-to-grow and low maintenance plant.

The plant grows long roots, and when it is planted in pots, the roots often grow out of them and invade the bowl or the plate below it.

Many gardeners choose to cut the roots to limit them to a particular area.

One thing to note here is the papyrus can even tolerate severe cutting of roots, and it will not cause any harm to the plant.

It also needs some pruning to remove the dying leaves and stems as they look unattractive.

How to Propagate Umbrella Plant

Propagation of an umbrella papyrus is done in a number of ways – through seeds, division, and cuttings.

If propagating through seeds, simply sow them in wet soil.

Make sure to water regularly, and the seedlings will start to appear within a few weeks.

Another method to propagate the cyperus plants is to cut the clumps into sections using a sharp knife and plant them separately.

Propagation through cuttings is considered the most efficient and reliable method, and there are several methods of doing it.

The simplest way is to remove a whole stem of the plant and cut it, using a pair of sharp scissors, to around 4” inches in length.

Now, cut the leaflets to about half and place the cutting, upside down, in small jars filled with water.

The submerged leaflets will form a new stem within a few weeks.

As the new plant stem grows out of the water surface, it will develop roots as well as new leaflets.

When the new growth stem has developed a reasonable set of roots, take the cutting out of the water and remove the newly formed stem from the old one and plant it into a pot filled with potting compost.

Make sure to water the newly potted plant regularly, and it will grow to a substantial size within a few months.

The plant also spreads through self-seeding under optimum growing conditions.

If things are too dark it will tell you by producing very few new shoots.

The greatest concern for the umbrella papyrus is spider mite.

However, they are easily controlled by spraying the plant with neem oil insecticide.

Cyperus is one of the most widely cultivated landscape plants grown as a background plant, accent plant, or incorporated into a water feature.

It’s suggested to use it as a water plant.