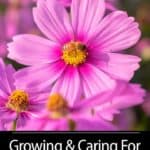 The Cosmos flower (Koz-moss) is an annual flowering plant grown for their showy daisy-like flowers often planted as background plants.

The Greek philosopher Pythagoras used the term “cosmos” to describe the “order of the universe” and translates it from Greek as “orderly or balanced.”

Flowers may be bowl-shaped or open cup-shaped depending upon the specific plant grown.

These flowers are ideal as decorations, used as cut flowers in arrangements, and perfect for attracting the butterfly, hummingbirds, bees, and enticing beneficial insects to your garden.

Is Cosmos An Annual Or Perennial?

The Cosmos plant comes from the Asteraceae or Compositae (Kom-poz-it-ee) family and is primarily considered an annual but grown as a perennial in some zones.

Where Are Cosmos Native To?

The Cosmos is native to Mexico. It is assumed that the Cosmos was introduced to South Africa from contaminated horse feed imported during the Anglo-Boer War.

Spanish explorers sent hundreds of cosmos back to Madrid. Cosmos wasn’t collected until the late 1700s, however, and the flower made its way to England in 1789, thanks to the Marchioness of Bute, wife of the English ambassador to Spain.

It was at least another 50 years until cosmos got to the United States, indirectly from England and Spain and more directly from Mexico. [source]

What Color Are Cosmos Flowers?

Back in 1895, there were only 3 colors of Cosmos flowers – crimson, white, and pink.

The introduction of Cosmos sulphureus (sul-few-ree-us) in 1896 added the color yellow to the flower color mix.

Since then new double, crested, and fluted types along with new colors have been added.

The primary colors found today are:

Years ago only late-blooming strains were available and burned down by the frost just as the Cosmos plants were coming into their prime.

Today, through hybridization you can find new varieties starting to bloom in June.

Here are some cosmos varieties you may consider growing in your perennial gardens:

They grow up to 2′ feet (60 cm) tall with shades ranging from dark red to maroon-dark brown. Apart from the color, its fragrance is also like chocolates.

Cosmos diversifolius reaches about 16″ inches tall and is a low tuberous-rooted perennial grown as an annual.

How To Care For The Cosmos Plant?

Cosmos plant care is easy, needs no special care, and requires little maintenance – staking, and deadheading are the only real maintenance needed.

Cosmos grow as a loose bush with a branching habit ranging in height from 2 ½’ feet to 6′ feet.

For the best flowering, plant Cosmos in full sun. In very hot locations, consider planting Cosmos in areas where they receive some afternoon shade.

Many of these plants may require staking especially in exposed locations to keep them from falling over. Staking Cosmos provides some protection from strong winds.

Cosmos work well planted along a fence line as they can use the fence for support. They also grow nicely along the sides of buildings or in a tall annual summer border.

What Is The Best Soil For Cosmos?

Cosmos grow in a wide range of soils, and this includes poor soil. They need well-drained soil with an average to poor fertility, and a pH slightly on the alkaline side.

How Often Should Cosmos Be Fertilized?

A VERY LIGHT feeding of a slow-release fertilizer early in the season is all the plants need. You can also use a liquid plant fertilizer at ¼ strength every two weeks.

If plants begin to look tall and spindly cut back on fertilizer.

How Often Should You Water Cosmos?

Although they are drought-tolerant, Cosmos require water on a regular basis. However, take care not to overwater. This can lead to fewer flowers and a rotted root system.

Wait until the plant is dry to water it. Give it a nice deep drink of water when the soil dries out.

The rest of the care for your cosmos is up to nature.

You can pretty much ignore this plant the rest of the time and yield beautiful flowers.

How Do You Grow Cosmos From Seed?

Cosmos plants grow easily from seeds that look like mini pine needles during spring. Start them indoors or directly outdoors.

Sow seed outdoors is the location they will grow. The area should be sunny, with sandy well-drained soil with a little nitrogen to get started.

Seed planted outdoors after May 1 can expect blooms in 8 to 10 weeks continuing through fall. Stake tall varieties and pinch early to encourage more flowers and bushier growth.

How And When To Plant Cosmos Seed Indoors?

Using trays or pots make them ideal for gently removing plants when transplanting.

Also, they don’t ask for too much as they thrive in relatively poor soil.

When the seedlings reach three to four inches in height, transplant them into 5-inch pots.

After the danger of frost passes, transplant your seedlings to flower beds. Keep in mind they prefer soil that isn’t too rich.

Rich soil will encourage the leaves and foliage to grow but will discourage them from blooming. Cosmos prefer a warmer climate with dry weather.

Can You Save Cosmos Seeds?

For wanting to plant seed every year, look for the spiky-brown seed heads, save these for the following year in a dry envelope.

Allow the seeds to go wherever the wind blows them and self-seed.

Do You Deadhead Or Pinch Back Cosmos?

When your Cosmos finishes flowering, deadhead the plants by cutting off all of the dead flower blossoms. Deadheading will encourage the plant to produce more flowers and help the plant to fill out properly.

When in full bloom, consider removing spent blooms on a daily basis to keep plants looking healthy and full.

Don’t be afraid to pinch off any extra stems or shoots growing up from the base of plants. This will also encourage stronger more vigorous growth.

Can Cosmos Be Grown In Pots?

Cosmos can grow successfully in pots. The same “rules” apply for growing Cosmos in garden beds – lots of sun, lightly fertilize, and do not over-water. However potted Cosmos need a few additional guidelines or tips.

Water potted Cosmos thoroughly when the top 2” inches of the soil becomes dry. Allow the water to drain. Do not allow the potted Cosmos to sit in a saucer of water.

Cosmos are relatively pests and disease-free.

They are susceptible to fungus attacks on the stem with girdle the plant. The girdling results in all plant parts above the lesion dying.

Remove and destroy the infected plants.

In fact, by planting Cosmos your garden can:

Not only do Cosmos have few pests or disease issues to battle with, but they attract good insects to the garden.

No plant is “deer-proof.” Do not confuse deer resistance with deer-proof.

Most growers consider Cosmos to be deer resistant or “seldom damaged.”

Planting Cosmos flowers in the garden allows you to add tall flowering background material in the annual border, attract beneficial insects with low to no maintenance.

This makes Cosmos a colorful winner in any garden.