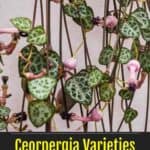 Ceropegia is a family of intriguing climbing or dangling succulents, easily grown but regrettably little known.

The ceropegias are generally characterized by the following:

Some ceropegias climb, some clamber while some dangle indolently.

Some make baby tubers at intervals along the stem and soil, while others don’t.

Some have leaves over an inch long. Some have only stubs—or none at all.

The dangling varieties are most effective in small pots or hanging containers, not in large plantings.

The stems fall straight down for several feet, creating a lace-curtain effect with embroidery of intricate foliage and flower patterns.

To plant them, you may do the following tips:

If you don’t provide the support, the stubborn stem will most likely climb upon itself.

Seldom are such charming plants so sure to be successful.

Ceropegias will adapt to full sun or light shade.

They like sandy soil, kept moist in summer but on the dry side in winter.

Warm air is fine, and so is average humidity.

Most varieties don’t die down for winter dormancy, but those that do will have wilted

stems and leaves, or may even dry up.

Simply hold back on watering until the plant comes back to new life.

Cuttings of stem tips or sections root easily in barely moist sand, so do baby tubers from the soil or along the stems.

Seeds, when available, grow as easily as cacti.

Pairs of dark-green leaves, like pointed wings, show off a feathery network of silvery veins.

The greenish flowers are veined with purple and brown, like the ribs of an umbrella.

Impudent green heart-shaped leaves stand out in pairs from the wiry stems.

Flowers are green, marked with purple-red.

Trailing stems to 4’ feet long, with narrowest, pencil-point dull-green leaves marked with a thin silver line down the center.

Flowers are green, purple, and purple-black.

The Cactus and Succulent Society first mentioned this South African species in 1960.

It is reported “allied to Ceropegia woodi, with a tuber and silver-marked leaves.

Stems die back to tuber in winter. Withhold water until growth resumes in spring.”

Since this one does not hang freely, it should be trained on a small trellis.

Ceropegia sandersonii has strong twining, climbing stems with tough leaves and incredible 3” inch flowers, funnel-shaped, the flaring top joined in the center—startling resemblance to the eyesockets in a skeleton head.

The plants are sometimes shipped cut back and will come up from the roots.

Stout climber to 6’ feet, with thick, short-jointed stems and nubbins where leaves might be.

Like a heavier version of Ceropegia woodi, with wavy-edged leaves.

Favorite Ceropegia Woodii aka rosary vine, a popular name inspired by the beadlike bulbs regularly spaced along the stem; or sweetheart vine, a string of hearts, hearts entangled, for the perfect green heart-shaped leaves with dainty silver mosaic pattern.

This is a trailer with a lavender-pink pipe or urn-shaped flowers.