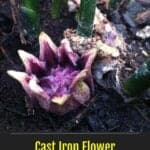 The cast iron plant is a curious specimen whose popularity over the past 200 years has finally brought attention to its genus.

As a general rule, the name cast iron plant refers to Aspidistra elatior (ass-pi-DIS-truh ee-LAY-tee-or) and its cultivars. However, a few cultivars of Aspidistra lurida and Aspidistra yingjiangensis also share this nickname.

This plant from southern Japan and Taiwan loves shade and is often used to fill in spaces that could kill other plants, such as under decks or in full shade spots of the garden.

But there is also a bit of mystery surrounding this plant. It earned its nickname because it is almost impossible to kill.

One of these is whether or not the cast iron plant produces flowers.

However, the answer might surprise even experienced growers and make you look at your cast iron plant a little differently.

Does The Cast Iron Plant Flower?

Believe it or not, cast iron plants do produce flowers, and your’s may have bloomed without you or your family even noticing.

It’s not very surprising that most cast iron plant owners didn’t know these plants could bloom because it’s almost impossible to get an indoor plant to produce flowers.

As for those grown outside, the flowers are so bizarre that you won’t even spot them unless you’re looking for one.

When you think of flowers, you probably picture a bunch of petals arrayed in some shape around the plant’s sexual organs and sitting somewhere on or even towering above the plant.

However, the blooms of a cast iron plant are quite the opposite and look almost prehistoric. Some would say “out of this world” in the case of Aspidistra ‘Milky Way’.

Growing on very short stems attached to the rhizome, the flowers are cream-colored fleshy masses with maroon to purple interior and 8 short lobes instead of petals.

Appearing in earlier summer when conditions are right, the plant’s prominent leaves hide these flowers.

Do They Have Any Fragrance?

The flowers have no scent, common in plants that don’t rely upon bees, butterflies, or hummingbirds for pollination.

The placement, shape, and other aspects of these strange blooms have led to quite the debate on just how cast-iron plants are pollinated.

Do They Attract Pests?

Due to these peculiar flowers’ location so close to the ground, botanists theorized they must be pollinated by something that lives at ground level.

In the 1800s, two common pests were suggested as potential pollinators: slugs and springtails.

The argument as to which of these pests were responsible for pollination continued until a study in 2018 proved fungus gnats pollinate the plants.

This parasitic wasp attacks the larvae of fungus gnats, so while it was seen to carry pollen from a cast iron plant bloom, it’s unknown whether or not this was accidental or another natural pollination method.

Unfortunately, botanical interest towards aspidistras didn’t take hold until the 1980s, when the 8 or 10 known species suddenly began to expand.

By 2008, there were 93 known species, and current lists now estimate about 192 different species.

Such sudden interest means we still know very little about how or why cast iron plants bloom the way they do.

Sadly, this includes the requirements to make a cast-iron plant bloom.

We know that these plants rarely bloom indoors or in containers. However, the factors triggering this blooming have yet to be explored or documented.