Commonly called chimney bellflower, the plant is native to southeastern Europe and belongs to the Campanulaceae “bellflower” family. 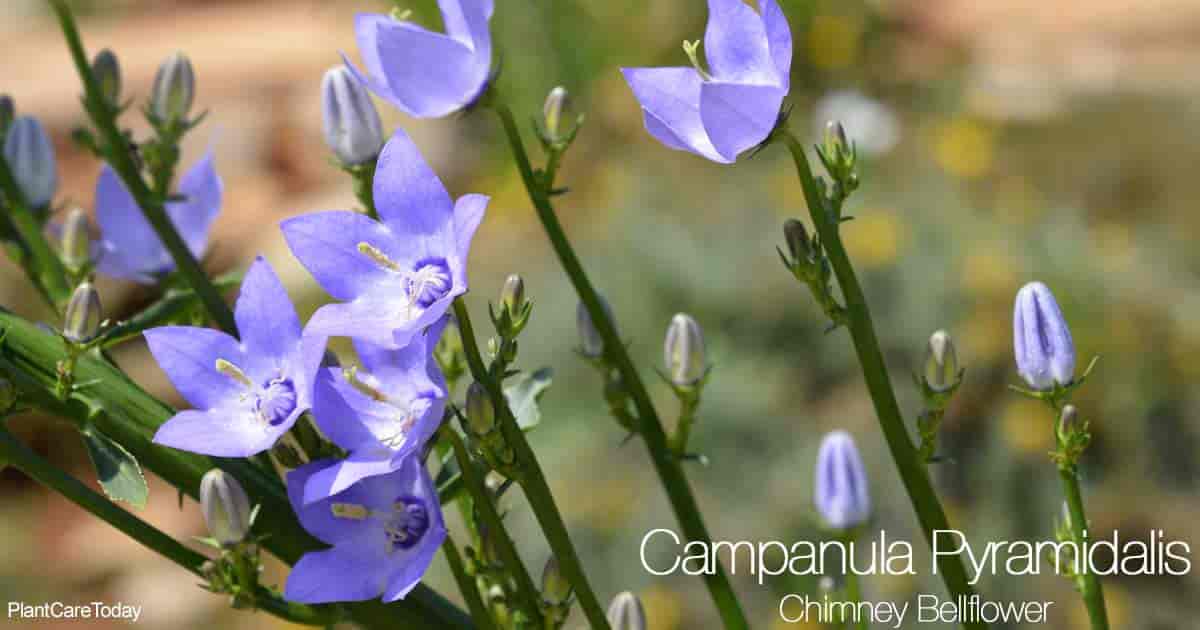 Campanula pyramidalis is a biennial, producing flowers the year after sowing from seed before withering.

While it’s a short-lived plant, the chimney bellflower adds dimension and bright colors to balconies and patios.

The bellflower is easy to grow but requires a couple of special steps to ensure optimal health.

The chimney bellflower is a type of clumping plant with a base of heart-shaped leaves. The leaves are typically a rich green color.

The base of the plant doesn’t get very tall. Most of the growth comes from the flower spikes appearing later in the season.

The plant blooms in the summer, a year after sowing the seeds. As summer approaches, the campanula pyramidalis begins producing several tall flower stalks.

The flowers are bell-shaped, resembling the Canterbury Bells. They are often white or pale blue and measure 1” – 1.5” inches.

The spikes of flowers form a clump, growing from the base and creating a pyramid shape almost resembling an upside-down hanging plant.

The flowers don’t produce a noticeable fragrance. The spikes may reach up to 4’ feet tall.

Without protection from wind, the spikes are easily damaged.

Plant the chimney bellflower near a tall structure such as the side of a house or shed or use stakes for support.

Place on a sunny patio or balcony.

Remember this is a biennial, flowering during the second year.

If temperatures regularly drop below freezing, overwinter the plant indoors.

Bring the plant back outdoors in late winter or early spring after the threat of frost has passed.

Water the plant regularly, ensuring the chimney bellflower never dries out during the flowering season.

If the bellflower is in a container, check it frequently as container plants tend to dry out more quickly.

This is especially true during hot, dry weather.

Add liquid fertilizer to the water every two weeks during the summer of the second year.

Before flowering, transplant the chimney bellflower to its final home.

The plants shouldn’t need transplanting after the move as they start to die out after the second year.

If the stems start to bend or break, use stakes to support the flower spikes.

Throughout the flowering season, remove deadheads to encourage new growth and fuller blooms.

How to Propagate Chimney Bell Fflower

Either collect the seeds from the flowers at the end of the season or purchase packets.

In regions with mild winters, move the pots outdoors on a patio or balcony.

In cooler regions, overwinter the plant in a cool room.

At the start of spring, move the plants to their final home.

After flowering, collect the seeds again to repeat the process or allow the plants to die out.

Campanula pyramidalis isn’t toxic or invasive but may suffer from occasional problems, including pests and preventable diseases.

A common issue is the appearance of irregularly shaped brown patches on the leaves.

The blotches are a leaf spot, often caused by overwatering or excessive humidity.

Remove the affected leaves and treat the rest of the plant with a fungicide.

If the delicate stems and leaves appear damaged or partially eaten, garden slugs or snails may have attacked the plant.

Remove the slugs or snails by hand.

Using snail bait or slug pellets adds toxins to the plant, making it potentially toxic if eaten by children or pets.

Every other year, the chimney bellflower brings color throughout the summer.

Use it to brighten and add height to any balcony, terrace, or patio.

Growing several varieties of the plant together in the same container can provide a wall of rainbow colors ranging from white to lilac-blue.