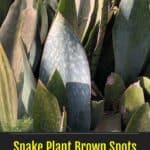 Snake plants are both attractive and low maintenance.

Yet, more and more problems are occurring due to a major plant classification system merging sansevierias (AKA snake plants) into the Dracaena genus due to genetic similarities.

Unfortunately, sansevierias look different from dracaenas, and they also have different care needs.

Fear not if you own a snake plant and have noticed brown spots or marks appearing on your plant. The cause is usually easy to diagnose and fix.

A wide range of issues can cause brown spots, usually involving a mistake in your plant care routine.

The following causes of brown spots or marks include remedies and prevention techniques.

Unfortunately, the nutrients in these granules dissolve at different rates, leading to malnutrition or – even worse – chemical burns.

Fertilizer-related burns may appear at the base of the plant or result in brown leaf tips within a few days of fertilizing.

Using a liquid-soluble fertilizer will help distribute the nutrients throughout the container, reducing the risk of burns.

When applying, be careful not to get any fertilizer on the plant itself.

If you’ve ever seen pictures of a person with frostbite, you know what to expect on a plant.

Sansevierias are tropical and cannot handle temperatures below 50° degrees Fahrenheit.

Exposure to frost will result in frostbite, which cannot heal.

You will need to remove any frostbitten leaves, as they will become necrotic, which can spread to the rest of the plant.

If you suspect the temperature will be dropping, bring any outdoor plants inside.

Also, place your sansevieria out of the direct line of sudden drafts, such as doorways, vents, or air conditioners.

Fungal issues are often the result of getting the leaves wet or overwatering. There’s a greater chance of infection if you mist your plants often.

Other fungal infections may be a side effect of infestations.

This source of spots tends to be less common, as snake plants do well in normal household humidity levels of 40% to 60% percent.

However, humidity levels tend to decrease in winter months or in rooms with central air.

Instead of misting, give your plant a pebble tray or personal humidifier to combat any humidity issues.

Piercing insects love succulents as they feed on the sap.

You can use an insecticide to end an infestation quickly.

Consider using neem products if you face both an infestation and fungal infection (or wish to avoid both).

Apply neem soil soaks every 2 to 3 weeks as a systemic insecticide. It kills piercing and chewing insects without harming beneficial insects.

The soak will also fight off any fungal infection that extends below the plant’s skin, including some forms of bacteria and root rot.

Meanwhile, neem foliar sprays will attack pests and surface infections and double as a leaf shine.

Finally, neem cakes are the solids left over from extracting neem oil. They work well as an organic fertilizer that can also fight off fungal contamination of the soil.

Like people, plants can bruise, leaving brown marks where the injury occurred.

Sometimes this is unavoidable, such as when moving the plant or having one delivered.

The good news is that these bruises aren’t harmful to the plant.

Snake plant root rot, the result of overwatering, is a deadly disease that is either bacterial or fungal.

Root rot shows up as dark brown to black roots, which may also feel mushy or give off a foul odor.

Be sure to sterilize the shears between each cut and dispose of the cuttings.

As root rot can often be bacterial, don’t dip the roots in fungicide unless you’re sure it’s a fungal rot strain.

Instead, it’s best to dip the surviving roots in a solution of 1 part bleach to 10 parts water for 30 minutes. Allow the plant to air dry for 2 to 3 days (it will also begin the healing process).

Repot the plant in a fresh pot with new soil and avoid using fertilizer for up to 2 months while the root system fully heals.

Sansevieria is a tropical plant, meaning it’s adapted to life under a dense canopy.

As a result, the afternoon sun can scorch its leaves, resulting in brown or black, crispy margins and tips.

Keep your plant in a sunny room to one side of the window where the sun’s rays won’t hit it directly (or use a sheer curtain to diffuse the light).

You can also put the plant in a window that gets morning or evening sun but afternoon shade, as the rays are milder.

All these are toxic to snake plants and can interfere with the absorption of water and minerals. They also cause burns to the roots and turn the leaves brown.

To avoid this issue, always use distilled water or natural rainwater.

If you have to use tap water, let it sit out overnight, then run it through a filter to remove the worst chemicals and salts before watering your plant.

Failing to water your plants properly is not only one of the easiest mistakes to make but also the easiest one to avoid.

Underwatered leaves will become crispy and turn brown from the margins inward.

Edema is a condition in which the leaf cells take on so much water that they burst, creating discolored blisters that can then burst in turn.

Repot your sansevieria when it’s severely overwatered. When you do, check for root rot, which will kill your plant if not treated.

Solving a watering issue is quite simple by using the soak-and-dry technique.

Stick your finger in the soil to see how dry it is.

Individual species and cultivars may vary slightly, but water when the soil is dry 1″ to 2″ inches down.

Use room temperature water and pour slowly. Work around the container until the soil can no longer absorb when you’re pouring, or water begins to seep from the drainage holes.

Note that your plant can exhibit symptoms of overwatering when the soil is compacted, your plant is rootbound, or there aren’t proper drainage holes.

Adding perlite to the potting mix and repotting with fresh soil every 2 to 3 years can remedy this. Also, graduate one container size up as needed.

Ensure the container has adequate drainage holes and isn’t too big, which can lead to fungal contamination of the soil.