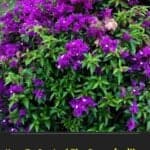 However, while easy to care for and relatively free of pests and disease, these plants are vulnerable to a particularly nasty little crawler: the bougainvillea looper.

While other members of the Nyctaginaceae family are known to suffer from this pest, bougainvilleas are the bread and butter of this pest.

Thus, if you have a bougainvillea, you’re probably going to run into them at some point.

What Is The Bougainvillea Looper Caterpillar?

The bougainvillea looper is a type of inchworm (i.e., a small, worm-like caterpillar approximately 1″ inch long that moves by bunching its body up into a loop shape, then stretching out as if measuring the distance).

They range in color from brown to green or yellow and are the larvae of the somber carpet moth (Disclisioprocta stellata).

The adults don’t feed on plants and are small, fast brown moths with a 1″ inch wingspan.

Both the adults and larvae are active at night, so you may not even see the moths laying their eggs on your precious bougainvillea.

The tiny caterpillars are camouflaged well against the bougainvillea’s foliage, so they are often only discovered once the damage has set in.

What Damage Does Bougainvillea Looper Caterpillar Cause?

Bougainvillea loopers feed off of the foliage of your plant, leaving behind severely scalloped edges of leaves or other signs of chewing.

The loopers will often hide further down the stems during the day, and as they devour a leaf, they will slowly make their way along with the young tender shoots, eating their way towards the old Bougainvillea leaves.

They also feed on other popular plants from the Nyctaginaceae family, such as amaranths and four o’ clocks (Mirabilis jalapa).

While not terminal to the hardy bougainvillea, the damage is unsightly and can lead to the plant’s entire defoliation.

How To Control the Bougainvillea Looper Caterpillar?

Thankfully, there are several ways to help control a looper infestation.

Natural options are best, although there are also plenty of chemical options.

Look for pesticides formulated to work against caterpillars.

It’s best to apply early in the evening so it’ll catch the loopers as they emerge for their night feedings.

Be warned that pesticides tend to be a little too good at what they do, killing both harmful and beneficial insects alike.

Alternatively, Spinosad is an organic pesticide used as an active ingredient in many other products, including some flea treatments.

The substance causes leaf miners, loopers, thrips, and other pests to become overexcited.

As a result, they stop eating and become more active until they die of exhaustion.

The biggest downside to using Spinosad is that there is evidence to suggest it may harm bees that come in contact with it.

Perhaps the best way to control bougainvillea loopers is to encourage species that feed on them.

Both birds and many small omnivores consider the larvae a tasty snack, and some beneficial insects such as ladybugs and lacewings may also help with population control.

By far, the best remedies are natural ones, and there are a couple of good options for dealing with the looper.

Better known simply as Bt, this bacteria will breed in the loper’s stomach, causing its digestive system to burst.

Apply in the evening, as exposure to sunlight will kill the bacterium.

While an excellent remedy overall, there is evidence that overuse can lead to Bt-resistant mutations.

Neem foliar sprays can be highly effective but also difficult to use in the case of loopers.

The spray has to come in direct contact with its victim and kills through suffocation, but it will dissipate in 45 minutes to an hour after application.

As it’s best to apply this remedy around dawn or dusk to avoid harming beneficial insects, it’s best reserved for indoor use.

By far the best natural insecticide out there, neem soil soaks use raw neem oil and are absorbed by the plant’s roots, creating a systemic pesticide that protects your plant for up to 22 days.

It won’t harm earthworms and only kills piercing or chewing pests, yet it is non-toxic to humans and pets that may consume a treated plant.

Best of all, the neem will fight off many non-surface fungal and bacterial infections and can be applied every 2 to 3 weeks as a preventative.

While it won’t kill the loopers themselves, getting rid of the adults will help control the larval population.

Bug zappers designed for moths are a great solution, as are fly strips, although the latter may also catch beneficial insects.

Just be warned that this isn’t a phototaxial (light-attracted) species, so some zappers that use light to attract may be less effective.

Another great option is to use repellants.

The moths don’t like many common herbaceous plants, such as lavender, rosemary, and thyme.

Doing a little complimentary planting with any of these by your bougainvillea can help reduce the presence of both adult and larval somber carpet moths.