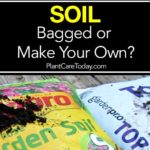 Question: What is the best potting soil to use with everything from varieties like African violets to succulents and cactus, indoor houseplants to outdoor containers what’s best?

What can affect growth, the plant or soil? Deb, Dallas, Texas

Answer: Deb, the best soil for plants happens to be a difficult one to give you a direct answer on.

One of the most important components for success with house plants and their health starts with the potting soil they grow and spend their life in.

The problem comes from the fact that there are an infinite number of potting mix possibilities in soil make-up and consistency, to make the claim of “What soil is best for plants.”

Some soils are sandy, others heavy with clay, some rich in nutrients, and others the only description available – barren.

Soils in their native state range from desert sands, where only sage or some forms of cactus can survive and grow to the midwestern plains where loamy soil could grow any plant capable of surviving in the climate.

Pull out ten different gardening books, and you’ll most likely find ten different house plant “potting soil recipes” and tips for making your own potting soil – all claiming to be the best potting media or all-around use.

However, everyone could stand on their own and produce the same results.

In theory, every plant would grow best in soil made specifically for the plant, with the exact proportions of several different components.

Fortunately, almost every plant will adjust to a good basic soil combination of loam, sand, humus and organic fertilizers, plus small amounts of other additives if needed and sometimes peat moss.

Conduct soil testing to determine your soil type and ph level. A soil test will also give you an idea about the current nutrients of your lawn or yard, making it easier for you to know the right soil improver to apply.

Making Your Own Potting Soil

Years ago, people made their own potting soil, gathering all the pieces of the puzzle and mixing everything together with their own recipe.

Times have changed. Most people don’t make their own soap anymore.

Today you can inexpensively and easily buy potting soil at the supermarket or garden center and not go through the trouble of mixing your own.

There are many commercially packaged potting-soil mixtures on the market – Miracle Grow, Black Gold, and Hyponex Potting Soil, for example, and most do a more than adequate job.

These packaged potting mixes are properly sterilized and free from pests, mites, and insect larvae.

A professionally mixed potting soil for a specific purpose, in the long run, is inexpensive to buy and easy to use. Even professional nurserymen use potting soils and mixes blended for them and their plants.

Some plant varieties like African violets require soil with a higher percentage of humus.

At your garden center, look for special mixes like a soil mix for African Violets, which can also be used with good results on ferns, Begonias, and other tropical indoor houseplants.

Depending on the planting container, certain plant varieties may need additional soil components to improve or change the soil.

For example, potting succulents in terra cotta pots, which hold moisture, may differ from planting in plastic pots.

What is humus made of or composed of decayed organic matter such as grasses, leaves, and weeds, which are rich and hold the ability to contain moisture?

A humus made with a fairly heavy proportion of sphagnum peat moss instead of other vegetable or organic material works more effectively than one made without it.

Your garden supply store can provide packaged humus for your organic compost.

The best soil mix for potting depends on the plant variety, where you would use it, drainage, how often you water, etc.

Taking the time to find a good soil mix best suited to your plant will give you greater success in the long run.

In this video, Gary Pilarchik of The Rusted Garden shares the differences and what to look for in buying or making your own soil mix for growing containers.