While this species of the Sprekelia genus is closely related to the Hippeastrum genus it’s native to the rocky hillsides of Mexico and Guatemala. 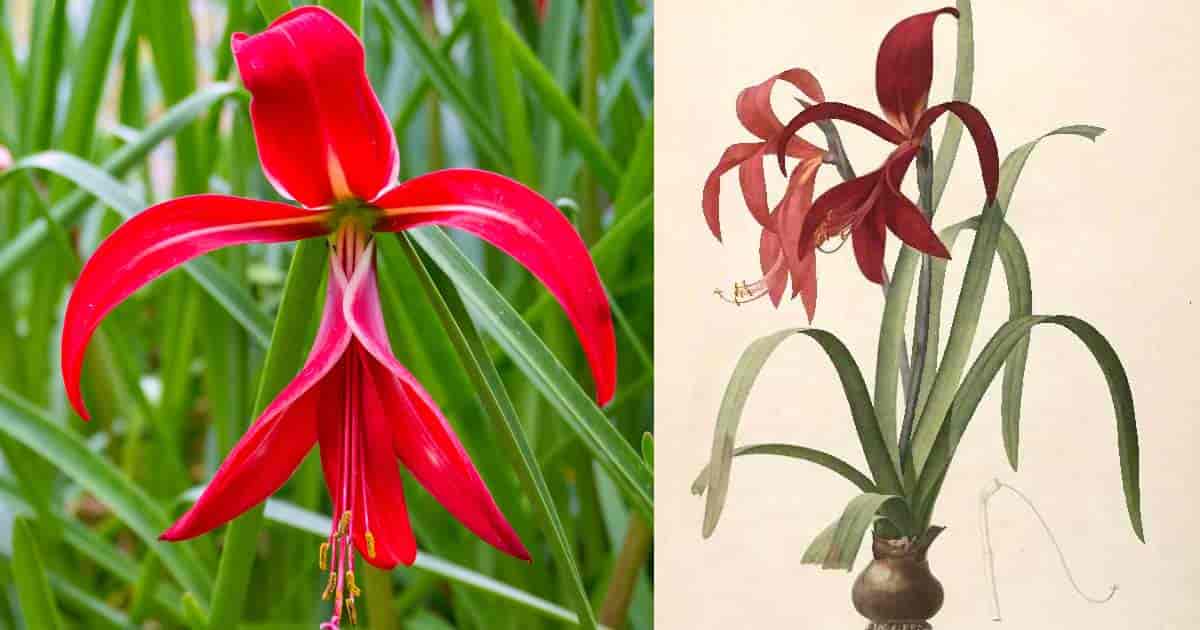 Sprekelia was introduced in Europe in the latter half of the 16th century, 1568 to be specific.

The plant was first named as Amaryllis formosissima by a Swedish botanist Carl Linnaeus.

It was renamed in 1821 by a British botanist William Herbert in honor of J.H. von Sprekelson, who first sent this plant to Linnaeus.

The first part of the modern botanical name, Sprekelia, is after the person who introduced this plant to Linnaeus.

The plant’s other common names are:

Even though it’s not a true lily.

The Aztec lily plant is distinguished because of its large flowers that grow individually at the end of sturdy, but hollow cylindrical scapes.

The leaves of this plant are narrow, about an inch wide, and can grow up to 2″ feet.

The flowering pattern of this lily species is a bit unique and the foliage similar to that of a daffodil or tulips.

This summer-blooming bulb is usually planted in the spring and blooms in the summer, like other varieties such as gladiolus and dahlias.

While early summer is the bloom time for these beautiful red flower colors, they may sometimes grow at other times of the year as well when the plant’s grown in a greenhouse or as a houseplant.

Even when grown in perfect conditions, the plant does not necessarily flower every year.

The flowers of sprekelia formosissima plants are short-lived; they shrivel just after a few days of blooming.

A Jacobean lily plant grown from seeds can take up to 7 years to start flowering.

Sprekelia Formosissima requires full sun sunlight to thrive but not as much though during the growing season.

If you’re in a hotter climate they’ll tolerate partial shade.

Place the plant in a well-ventilated area to ensure proper growth and recommended for USDA hardiness zone of 8 – 11.

Once established Aztec lilies are drought-tolerant but do best with watering regularly during the growing season.

Give them a liquid feed every 2 weeks during the growing season.

While this species of Amaryllidaceae family can survive in all kinds of soil, provided it’s fertile, it does best in slightly alkaline soil.

Keep the plant dry in winter and autumn when it’s in its dormancy.

Wet soil can cause the bulbs to rot during the dormant phase.

Early fall is the ideal time to transplant Jacobean lily.

When you plan to move or divide this plant, let the soil completely dry out during the preceding mid to late summer.

Dig the lily bulbs out when they’re dormant.

Before planting, prepare the area by mixing some organic fertilizer in the soil (half a pound of fertilizer is enough for an area of 25 sq. feet) and then plant the bulbs about 3″ – 4″ inches deep.

If you live in an area likely to get frost, cover the site with about 2″ inches of mulch before it frosts.

While Aztec lilies do not require much maintenance, protect them from the extreme cold.

If planted in the ground, make sure to lift them during the fall.

Store the dormant lilies through fall and winter and then replant in the late spring.

However, you can leave them in the ground in areas having mild winters.

How to Propagate Sprekelia Lily

As mentioned earlier, let the soil of the plant dry out during mid to late summer before digging it out.

This ensures the foliage dies before you remove the plant from the soil.

After being replanted in fall, Jacobean lilies will most likely start blooming in the spring or early summer.

However, sometimes they begin to bloom as early as two months after replanting.

Sprekelia formosissima should only be propagated once in every 3 to 4 years because they perform better when slightly crowded.

Sprekelia Formosissima is typically pest-free and not susceptible to many diseases.

The only illness Aztec lilies can suffer from is Narcissus leaf scorch.

However, extreme winters can affect their health and growth and too much moisture during the cold season can make the bulbs rot.

Its bright and beautiful flowers add color to your garden and increase its aesthetic appeal but it may be easier grown as a container plant.