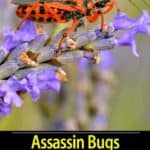 The Assassin bug – you might not be too thrilled with the idea of armies of assassins lurking about your garden, but you should be.

There are thousands of varieties of assassin bugs, and all are voracious pest predators. They naturally kill aphid garden pests in large numbers and devour leaf caterpillars and even some very small mammals.

In this article, we will discuss these beneficial insects and share advice on attracting and keeping them in your garden. Read on to learn more.

Wheel Bugs Are Not The Only Assassin Bugs!

The wheel bug may be the most common and recognizable assassin bug, but it is by no means the only one.

Across the globe, in Central and South America, Asia, Africa, and Europe there are almost 3000 different species of assassin bugs. In North America, there are nearly 200 species.

Some you may be familiar with include:

In all species, both the nymphs and adult bugs eat common garden pests.

They do this by poking their sharp beaks into the pest’s body and injecting a toxin that immobilizes the prey and dissolves its innards.

Once the assassin bug has its victim under control, it sucks out the contents and leaves the pest a mere husk of its former self.

What Is the Assassin Bug Life Cycle?

Adult female assassin bugs lay eggs twice a year. In the springtime, they lay them on the backs of leaves and on plant stems.

When the eggs hatch, wingless nymphs emerge. These immature bugs look like their parents, but they are smaller and flightless.

They begin eating pests right away and grow rapidly. Before attaining adulthood, they molt (shed their skins) between four and seven times, finally emerging as fully grown, winged adults.

These bugs are very broad-ranging because they eat all sorts of pests. For this reason, you can find them in all sorts of vegetation.

Watch for them in flowers, weeds, bushes, and trees. They are typically found on their own because, in addition to being hunters they are also hunted.

They have quite a few natural enemies, so they do not congregate as this would make them easy prey.

Luckily for assassin bugs, they are not defenseless against their enemies. They can both bite and shoot their venom a distance of about twelve inches.

For this reason, you should keep an eye out for them out in your yard or garden.

While these bugs are not aggressive to large mammals such as yourself, they will bite if you accidentally pick up or brush against one. [source]

What About Kissing Bugs?

You may have heard a lot about “deadly kissing bugs.” Many people believe that these bugs are the same as the beneficial garden assassin bugs. This is simply not true.

Although kissing bugs are members of the same family as garden variety assassin bugs, they do not eat the usual summer garden pests.

Instead, they drink blood.

For this reason, you are far more likely to find them in:

and other places where warm-blooded creatures live than in your yard or garden.

Even though they have been known to carry a deadly parasite, kissing bugs have by no means overrun the United States.

According to the Centers for Disease Control (CDC), infection with Chagas disease (which is caused by infestation with the parasite they can carry) is quite rare. [source]

The “assassin bugs” in this video are kissing bugs. Notice the characteristic broad, concave back and a striped border.

This is how you differentiate this blood-sucking type of assassin bug from the many fairly benign, insect-eating garden varieties.

How Can I Recognize The Beneficial Insects?

Beneficial predatory bugs are “true bugs” and as such their backs are an easily recognized shield shape.

These predators vary in size depending upon the species.

For example, the Minute Pirate Bug is usually only a sixteenth of an inch long. Wheel bugs, on the other hand, can be quite large at approximately one-and-a-half inches long.

Most assassin bugs are dark in color in shades of black, gray, and green.

Some elongate assassin bugs are brightly colored in shades of red and green with darker markings.

They are all members of the bug family known as Reduviidae.

Although these types of bugs may range greatly in coloration and size, you can always recognize them by their shield-shaped backs, big, round, beady eyes, narrow heads, and long, strong, three-segment, needle-like beaks.

The beak (at rest) is positioned in a groove that lies between the front legs may be tucked up under the body when not in use.

These bugs usually have a thin “neck” between the head and the body. Another identifying feature, if you happen to be close enough to count, is the four-segmented antennae. [source]

What If You Get Bitten?

If you move about mindfully in your garden, you are unlikely to get bitten.

Look before you reach and watch where you’re going and assassin bugs will see you coming and get out of your way.

If you do get bitten, it will hurt, but it’s not really dangerous.

The bug will inject salivary secretions into you, just as it would a pest. This will cause pain, swelling, itching, and a small amount of cell death.

It won’t cause serious harm unless you are allergic to the venom, in which case you should seek medical assistance.

Otherwise, treat the bite as you would a mosquito bite or other, similar bite.

Keep it clean, apply cold packs and wait for it to resolve.

This should just take two or three days.

If the bite continues to bother you after five days have passed, you may want to see your doctor.

Is It Hard To Avoid Assassin Bugs?

A modicum of caution and awareness should keep you safe.

Although these bugs can fly, they don’t do it well, so you are unlikely to encounter them zipping about.

You will typically find them lurking and bumbling around in the foliage.

They move slowly and are not aggressive, so you don’t need to worry too much about accidental encounters.

Even an occasional bite is a small price to pay for the amount of benefit these efficient pest predators can bring to your garden. [source]

What Do Assassin Bugs Eat?

No matter what sort of pests you have invaded your yard and garden, a member of the assassin family can surely assist.

These predators are generalists and like to feed on lots of different kinds of pests.

They operate by either lying in wait and ambushing their prey or actively hunting and stalking.

Here are just a few of the pests that fall prey to these friendly predators:

There are some assassin bugs in the Apiomerus genus that hunt bees and eat them.

How Can You Attract And Conserve Assassin Bugs?

The best way to welcome assassin bugs to your garden is to stop using pesticides.

Although this may result in a temporary increase in pests, once the assassin bugs get wind of it, they’ll come to your rescue.

You don’t want to greet them with a poisonous garden!

If you absolutely must use a chemical pesticide in your garden, search for selective or “soft” pesticides.

Encourage predator insects to take up residence in your garden by providing them with plenty of good hiding places.

Planting a cover crop of flowering plants can provide some of these bugs with alternative food sources, as well as good shelter for overwintering. [source]

Be Patient And Vigilant!

It may take a while for assassin bugs to establish themselves. Naturally, they need to have a ready food source in order to do so.

Standard assassin bugs, minute pirate bugs, and big-eyed bugs are examples of members of this family that overwinter in shrubby or weedy areas as adults and then emerge in the springtime to mate and lay eggs.

They look for areas rich in caterpillars, aphids, and other good food sources as good egg-laying sites.

In the springtime, you will see the eggs laid on leaves, stems, bark, and sometimes on the soil.

They are identifiable as tight, upright clusters of cylindrical, brown eggs.

Be sure to watch out for them and don’t destroy them by accident.

Keep a lookout for the nymphs, which look a lot like their parents but maybe a bit smaller and more colorful.

Don’t kill them by accident because they can eat lots of springtime garden pests.

Naturally, you should also watch out for adults.

Check with your local agricultural extension to find out what species of these predators can be found in your area.

Coexistence Is Key To Partnership With Beneficial Insects

To encourage these beneficial bugs to come to your yard, don’t mow too close or prune too stringently.

Plant a diverse collection of flowers, veggies, trees, and shrubbery that will also attract food-source insects.

Don’t use pesticides, and when you see these bugs outdoors, give them a wide berth.

Remember, predatory bugs usually appear in great numbers late in the season. This is nature’s way of making sure there will still be lots of them come spring.

Leave them alone and let them find good places to overwinter.

Allowing them to live and let live will ensure you have plenty of help with your unwanted bugs when the growing season returns.

If you find them indoors during spring and summer, cover them with a cup, slide a piece of paper underneath, and escort them outside.

In Texas, milkweed assassin bugs tend to come in during the cold months.

If you can cohabitate with them, they’ll keep your indoor pest insect population down.

Otherwise, relocate them to an outbuilding where they’ll have some shelter from the cold. [source]