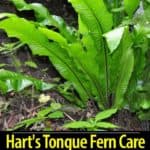 Native to Europe but a rare American variety (Asplenium scolopendrium var. americanum) are found in a limited number of locations in Alabama, Tennessee, New York, Michigan, and Ontario Canada.

Asplenium scolopendrium received the Award of Garden Merit of the Royal Horticultural Society.

While Hart’s tongue fern was once prolific in high hill lands and other temperate areas in its native range, it now has a very limited distribution and is quickly becoming a rarity, even in its native regions.

Experts relate the gradual disappearance of the plant to human intervention as it has destroyed much of the plant’s natural habitat.

The Asplenium scolopendrium plant is now being cultivated in many nurseries to prevent extinction.

It’s also grown as an ornamental plant due to its attractive foliage.

You may hear it by its common names including:

Asplenium is an unusual plant because it features both typical and atypical characteristics of ferns.

Like most ferns, Hart’s tongue fern grows at a slow rate and features rhizomes, but unlike ferns, it produces undivided fronds like it’s cousin the Birds nest fern (Asplenium nidus).

The long, narrow, bright green fronds are erect when they start growing, but arch over as their length increases.

Upon maturity, the fronds of Asplenium scolopendrium feature brown stripes on the underside, they look like the legs of a centipede.

These brown stripes are called sori and are the reproductive organs of the plant.

The evergreen perennial typically grows to 12″ – 18″ inches in height.

Hardy to the United States (USDA) hardiness zones 5 to 9.

While it grows throughout the year, under the right conditions, the growth rate slows down a bit during the winter months.

Asplenium scolopendrium does not produce any flowers because it’s a fern species.

Asplenium scolopendrium prefers partial shade to full shade with no more than three hours of sunlight per day.

Greater exposure to the sun will cause scorching and yellowing of the leaves.

During extremely hot weather, it’s recommended to place the potted plant on a tray filled with damp pebbles.

Even in its natural habitat in full shade, the plant is seen growing at sites remaining consistently moist throughout the year, such as moss mats, cave entrances, and sinkholes.

Make sure to water Asplenium scolopendrium enough to have moist soil all the time.

Water Hart’s tongue fern regularly until it gets established to make sure the soil doesn’t dry out.

Once it’s established, let the topmost layer of soil dry out between watering episodes, during summers.

Reduce the watering even further and let about half of the potting mixture dry out when the temperature falls below 55° degrees Fahrenheit (13° C) and stays the same for more than a couple of days.

To ensure proper growth and avoid the rotting of fronds, it’s recommended to water your Asplenium scolopendrium fern in the morning and water directly to the roots; avoid watering the fronds.

The rate of feeding for this plant depends on the potting mixture.

If you planted the fern species in a peat-based potting mix, apply fertilizer after every two weeks.

Feeding once a month is enough if it’s growing in a soil-based potting mixture.

Proper drainage is critical to avoid the rotting of roots.

Since the plant cannot tolerate excessively dry soil, it’s recommended to mulch around it with compost, once a year, to maintain soil moisture.

Asplenium scolopendrium is an easy-to-grow plant which doesn’t require much maintenance.

You have to make sure to maintain the right moisture levels and light to prevent any problem and ensure proper growth.

How to Propagate Hart’s Tongue

Propagation through spores is done throughout the year, but transplanting should be done in spring.

For propagation through rhizome:

Avoid watering too much, but do not let the soil to get completely dry either; keep the planted cuttings barely moist until the new growth begins.

Remove leaf bases from where the stem joins with the root.

Vine weevil grub is a common pest and can cause significant damage to the fern as they eat away their different parts.

Remove and destroy the affected parts of the plant and then apply a pesticide to prevent remaining parts from getting infested.

Hart’s tongue grown in greenhouses or indoor locations can get affected by capsids, blackflies, and greenfly.

Both flies are sap-sucking creatures which weaken the affected plant, stunt its growth, and spread other viral diseases.

Capsids, on the other hand, are bugs which graze the fronds and cause tiny white blotches.

To prevent your plant from getting eaten by these pests, spray them with a suitable insecticide in the evening.

Apart from these pests, the plant develops root rot due to poorly drained soil and crown rot if the fronds stay wet in cold weather.

In addition to being grown as an ornamental plant, the fronds of Asplenium scolopendrium are used for treating a variety of health conditions, such as dysentery, diarrhea, for removing obstructions of spleen and liver, and as an ointment for treating scalds, burns, and piles.

It looks great in the full shade in woodland gardens, rock gardens, and along crevices or as ground cover.