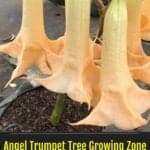 While considered extinct in the wild, Brugmansia (broog-MAN-zee-ah) have absolutely thrived in gardens around the world.

These plants come in a range of shapes and sizes and are generally considered to be small trees.

A total of 7 species and 3 natural variants exist, plus numerous cultivars.

Regardless of the plant, all Brugmansias are treasured for their foliage and often massive trumpet-shaped blooms.

What Are The Angel Trumpet Tree Growing Zones? Do They Grow in Other Zones?

Warm group Brugmansia will grow outdoors in USDA hardiness zones 9 to 12, while cold group plants will grow in zones 7b to 12.

If grown in containers or overwintered indoors, Brugmansia can grow in somewhat cooler climates as long as they are brought inside before it gets too cold.

The 7 species and 3 variants are separated into warm and cold groups based on whether they grew higher in the Andes or closer to sea level.

As a result, the two groups have different zone requirements and are best crossbred with other members of the same group.

Consisting of Brugmansia arborea, Brugmansia sanguinea, Brugmansia vulcanicola, and the variant Brugmansia x flava (a natural hybrid of B. arborea and B. sanguinea), the cold group was native to the Andes mountains and grew at high altitudes.

As a result, they can be grown outdoors as low as USDA hardiness zone 7b.

Brugmansia vulcanicola can be difficult to grow in USDA hardiness zone 11 or higher, as it is better adapted to colder climates than other species.

Additionally, Brugmansia sanguinea is the most beautifully colored of Brugmansia but has trouble blooming in temperatures above 71° degrees Fahrenheit, even though it will still grow in warmer temperatures.

The warm group is so named because it grew at much lower altitudes, with Brugmansia aurea having been the highest grower at 6,500 to 9.800’ feet.

As the name implies, members of this group need warmer temperatures to survive and are best planted in USDA hardiness zones 9 to 12.

A Note on Cultivars

While the species and natural variants have set zones, cultivars tend to be a little different, as some are bred for cooler temperatures than their parent plants.

When purchasing a cultivar, be sure to check its individual zone requirements.

One of the great advantages to growing angel’s trumpets in containers is the fact that they’ll be able to thrive in colder zones than normal, as they can be overwintered indoors.

However, there’s an important rule you must follow when growing brugmansias in containers.

Because pots are less insular than being in the ground itself, you can either submerge the pot in the ground or you will need to bring it indoors even if you’re in a zone where the plant can normally grow outdoors.

The rule for knowing if you need to bring a potted Brugmansia indoors is actually quite simple.

Begin by noting the coldest zone your species or cultivar of angel’s trumpet can grow, then add two full zones.

For example, if the coldest zone is normally 7b, your potted Brugmansia will have to be brought inside unless you’re in zone 9b or warmer.

And a warm zone plant that normally tolerates 9a will need to be brought in unless you’re in zone 11a or warmer.

You can also use the zone rule to keep potted plants outside during the summer in colder zones.

Using the zone rule above, you can let your indoor angel trumpet get a little fresh summer air as long as you bring it back inside when the temperature drops to the lowest temperature for that potted plant.

For example, a cold group Brugmansia in a container must be overwintered inside unless it’s in at least zone 9b.