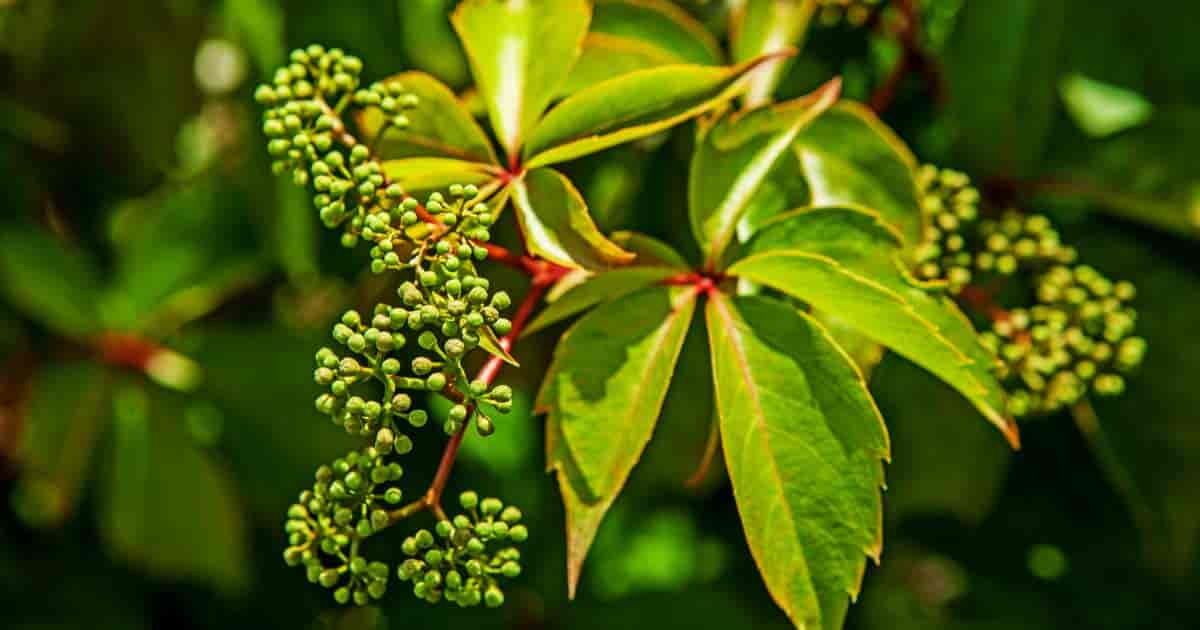 The porcelain berry belongs to the Vitaceae family, which also includes the grapevine.

The plant is native to temperate parts of Asia and is an easy ornamental plant to cultivate in other parts of the world.

The climbing vine has tendrils reaching 15’ – 20’ feet if allowed to spread.

It produces broad leaves with white-shiny undersides and toothed margins.

The plant is a climber and clings to surfaces with its tendrils.

As the temperatures start to drop at the end of the fall season, the leaves drop.

It then produces new growth in the spring.

The porcelain berry produces five-petaled flowers at the start of summer.

After the flowering season, the plant produces clusters of blue-colored berries.

The plant can thrive outdoors in USDA hardiness zones 4 or higher, allowing porcelain berry to grow year-round in parts of North America.

It also doesn’t need a lot of sunlight.

Place it under partial shade.

If grown indoors, set it near any window except a south-facing window to avoid giving it direct sunlight.

Depending on the layout of the house and the surrounding area, west-facing windows may also provide too much light, especially in the late afternoon.

When cultivating the plant in a region with freezing winter temperatures, place the plant indoors in a cool, draft-free spot.

Water the plant evenly and frequently throughout the spring, summer, and fall.

In the winter, allow the soil to dry.

The porcelain berry doesn’t need much water in the winter unless the leaves start to wither.

Feed the plant every other week throughout the active growing seasons.

Don’t fertilize at all during the winter.

Transplant in the early spring if the plant outgrows its pot or the soil requires freshening.

Manage the growth of the plant by pruning it back in late winter.

During the spring or summer, trim back stray shoots as needed.

How to Propagate Porcelain Berry

To propagate with cuttings, take cuttings in September.

As the plant drops its leaves each year, pests rarely become a problem, but spider mites and aphids may still attack.

Aphids settle on the leaves and produce a sticky substance causing the leaves to curl.

Rinse the leaves with cold water or create a mixture of rubbing alcohol and soap.

Rub the mixture over the leaves.

Treat infestations with a miticide.

Along with pests, there are two more issues to pay attention to.

First, the plant is an invasive species in parts of the Eastern US.

It spreads quickly and may take over other plants.

Birds like to collect the seeds and fruit, helping to spread the plant along roadsides.

Before growing the plant outdoors, find out whether it’s invasive in your area.

The second issue is the toxicity of the berries.

Humans and pets should not eat the berries as they may cause digestive problems.

To be safe, don’t leave children or pets near the plant unsupervised.

This hardy plant looks great on a patio or garden room but remember it is invasive!

Thanks to its bright flowers and berries, it helps add a splash of color to any room.