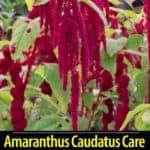 It is a fast-growing annual flowering plant species of the family Amaranthaceae (Amaranth plant).

It is believed to be native to the higher altitude regions in northern Bolivia, Ecuador, and Peru; the exact origin of Amaranth is uncertain.

Amaranthus caudatus has a long history of cultivation.

According to research, the plant, along with two other species of the same family, was grown by central pre-Colombian civilizations, indigenous North America tribes, Incas, and Aztecs.

The genus name comes from the Greek word amarantos meaning ‘unfading’ in reference to the long-lasting flowers of some species.

You may hear it called by its the common name including:

While the Love Lies Bleeding plant naturally grows in the tropics, it is also cultivated in the temperate regions.

On average, it takes around 4 to 6 months, after sowing, to reach the seed harvesting stage, but in some regions of the Andean highland, it can take around ten months.

The plant is self-fertile and can grow anywhere from 3’ – 8’ feet.

The red-colored flowers are the most defining and attractive feature of the Amaranthus.

The narrow, long, tassel-like, drooping flowers have a bloom time from July till September.

The inflorescence is up to 2’ feet long.

The flowers retain their blood-red flower color even when they get dry (dried flowers are often used for arrangements).

The plant will be killed at 39° degrees Fahrenheit (4° C) or below.

The A. caudatus plant grows best in full sun but enjoys some partial afternoon shade during summers when the weather is too hot.

However, be careful not to plant it in full shade as it cannot grow without sunlight.

During other stages, however, the plants can tolerate less water and are also drought-resistant.

It is recommended to water plants once or twice a week, preferably, during the dry seasons.

To ensure proper growth, add a general-purpose fertilizer about once or twice during a season.

However, it thrives in fertile, well-drained soil within the pH range of 5.5 to 7.5.

Loves Lies Bleeding Amaranth is not only easy-to-grow but is also a low-maintenance plant.

How to Propagate Amaranthus Caudatus

The seeds are sown either directly into the ground or in situ in pots.

Leave about 10″ – 12″ inches of space between the seeds or seedlings.

When planted in pots, transfer the plant to its permanent position after 2 to 3 weeks.

The temperature of the soil can affect the seed germination. Germination is good and quick in warm soil, but slow in cool poor soil.

While Amaranthus is grown throughout the year in the tropics, in temperate regions, it is often planted indoors in the early spring season and then transplanted to the ground after the last frost.

Another method of propagation is through wood cuttings.

To ensure the best results, take cuttings from growing plants as they root easily.

Also, poorly-drained soils can cause root rot, and powdery mildew issues may arise in warm and humid weather.

When Amaranthus is attacked by an insect or a disease, treat it with an organic fungicide, chemical, or insect repellant at the earlier stages.

We like Neem Oil insecticide for general purpose pest control.

The Amaranthus has long been cultivated in many parts of South America, particularly in the Andes, Indonesia, Malaysia, and India for its edible seeds and leaves.

The flower seeds are small, but are known to be highly nutritious – containing good quantities of:

They are either cooked or added to baked products in powdered form.

The mild-flavored leaves are consumed in both cooked and raw forms.

The plant is also widely grown in well drained soil and full sun for ornamental purposes due to its bright-colored showy flowers and make great cut flowers.

While no amaranthus species is known to be poisonous, their leaves concentrate nitrates when the plants are grown in nitrogen-rich soils.