Adonis aestivalis [ad-ON-iss, ee-STIV-ah-liss] is an annual herbaceous plant native to Europe but has been introduced in many parts of the world, such as the eastern and western regions of the United States, North Africa, Asia, and the Mediterranean region.

The plant has also been naturalized in many of these areas. 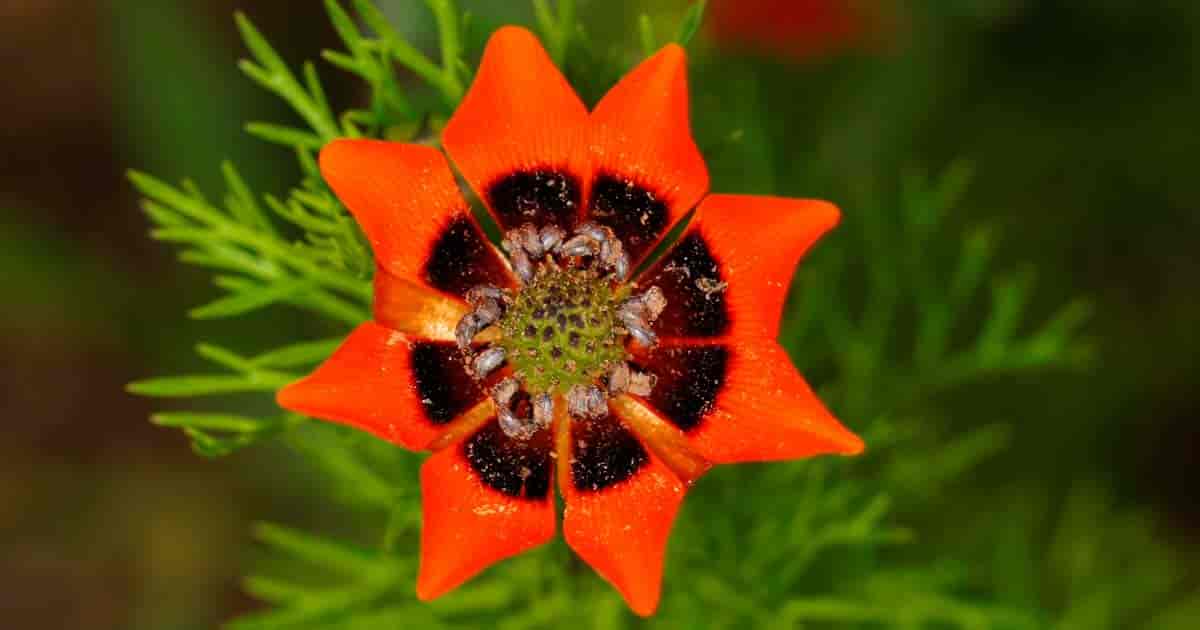 Adonis belongs to Ranunculaceae or buttercup family and is a hermaphrodite species, which means both staminate and carpellate parts are present in the same plant.

You may also hear it called by its common names including:

The Summer Pheasant’s Eye is a small, self-fertile plant only growing up to 1’ foot.

It features an upright, branched, and leafy stem.

The leaves are soft, pale and fern-like and finely divided.

Despite its small size, it can inhibit the growth of other nearby plants, especially legumes.

Aestivalis falls into the category of plants called ‘weeds’ because it requires very little care to survive as well as seeds very easily.

When grown singly, the young plants may need to be supported with canes or twigs, especially in windy areas.

The flowers emerge at the tips of stems.

The black-colored anthers and stamens provide a wonderful contrast against the red colored petals and make the flowers even more attractive.

The plant blooms in June, and by July the seeds are ripened and ready for pollination, which mainly occurs through beetles, flies, and bees.

The flowers usually last till September.

Pheasant’s eye can grow in both full sun and partial shade.

From sandy (light), to loamy (medium), and clay (heavy), Pheasant’s aestivalis can grow in a wide range of soils.

It can tolerate soil with any pH but prefers alkaline soil and a rocky site.

While it can tolerate any type of soil, it prefers moist and well-drained soil.

Since it is a small plant, it does not need much maintenance.

Just make sure to leave adequate space between aestivalis and other plants as it may inhibit their growth.

Regularly remove the dead flower heads from the plant to prolong the flowering period.

Pheasant’s eye does not require pruning.

How to Propagate Pheasant’s Eye

Adonis is best propagated by sowing the ripe seeds directly into the ground (in situ) preferably in spring.

However, the seeds can be sown in autumn.

Under the right conditions, germination takes place within 30 to 40 days.

If planted in spring, the plant will start producing buds in the summer.

While the seeds of are best sown directly into the ground, they can be sown indoors, and planted outdoors when the conditions are better.

The plant can self-sow its seeds, each season.

Pheasant’s Adonis is one of those plants remaining pest and disease-free.

However, in some cases, the flowers may suffer attacks by aphids requiring control.

The plants are poisonous to horses.

The pheasant’s eye is also planted for ornamental purposes due to its large bright-red flowers to add color and appeal to landscapes.