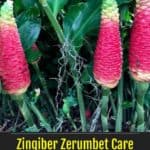 Shampoo ginger lily – Zingiber Zerumbet is an aromatic, clump-forming perennial. It comes from the large ginger Zingiber genus of the family Zingiberaceae.

Zingiber is a Sanskrit word meaning a bull’s horn. This hints at the horn-like appendage attached to its stamen.

Other common names include:

The pinecone ginger is a rhizomatous herbaceous plant found in tropical Asia. The exact origin is unknown. Many believe it to be native to the Indian Subcontinent and Malaysian Peninsula. From there it spread to Southeast Asia, the Pacific Islands, and Thailand by Polynesian settlers.

Shampoo flower gets its various names from its pinecone-shaped inflorescence. When squeezed the flower produces a fragrant milky-white substance and used as a shampoo or hair conditioner.

‘Wild’ pinecone ginger or bitter ginger got its name from its use as a culinary additive with a bitter taste.

Caring For An Zingiber Zerumbet

With a clumping growth habit, Zingiber Zerumbet usually grows about 4’ feet tall, however, in some cases, it is found to grow up to 6′ to 7’ feet tall.

It’s reed-like, erect stems rise up to 4’ feet and are clumped by sheaths of 8” inches long, narrow leaves.

The inflorescence grows 2” to 4” inches in length.

Aromaticum is a broad-leaved plant that produces showy blooms on flower stalks from August to September.

In spring, 9 to 12 blade-like green leaves appear on the underground stem.

The inflorescence resembles a pinecone and is initially wrapped by green, waxy bracts, which turn a vibrant shade of red upon reaching maturity.

The red pine cones have a fresh, aromatic, ginger-like scent.

The pinecone-shaped inflorescence produces tiny tri-petaled flowers in hues of yellow and is full of fresh-smelling, bitter-tasting, creamy white sap.

Bitter ginger is winter hardy to the USDA hardiness zones 8 through 10.

The awapuhi plant prefers tropical or subtropical climates, but also grow in mild climates on the mainland.

The ideal temperature for these exotic plants is 32° degrees Fahrenheit (0° C) or higher.

Shampoo ginger should be seasonally waterlogged.

Water them with free-draining soils during the warmer months and keep them dry during the dormant winter months.

Similarly, fertilize shampoo ginger plants with an all-purpose fertilizer during summer only.

Supply phosphorus-rich fertilizer by the end of the growing season to ensure healthy and well-grown rhizomes.

It prefers soil with a neutral pH and a light to medium texture.

In summer, provide the plant with consistently moist soils and keep the soil dry during winters since the plant goes dormant and requires less moisture.

While the shampoo plant shows great tolerance for poor sandy soil, hard soils need to be adjusted by adding gypsum before planting the plant.

Wild ginger is cultivated by seeds and rhizome extracts.

Shampoo ginger lily is a forgiving and fast-growing perennial which can spread across a garden within years under ideal conditions.

In USDA Zone 8, these plants survive winter when mulch is added to the soil and the roots and rhizomes are protected from freezing.

However, in regions located in the north of Zone 8 up to Zone 10, the rhizomes should be picked up and overwintered indoors.

Also, potted plants should be kept indoors, away from the frost, when temperatures fall below 55° degrees Fahrenheit (13° C).

Snip the leaves which die to the ground after the first frost.

Keep an eye out for pests and, if infested, spray with a strong water jet and apply plant-based horticulture oil on the leaves.

Do not apply oils when the climate is hot and humid.

While Zingiber zerumbet grows via seeds and roots bought from the store, the most preferred method of propagation is via rhizomes.

The plant is mostly free from any serious pest or disease problem.

However, sometimes aphids and mites attack the young, tender growth.

Is Bitter GInger Toxic or Poisonous?

Bitter ginger is an edible plant and has medicinal uses.

It is not poisonous.

It contains a wide range of chemical compounds like polyphenols, terpenes, and zerumbone.

Is The Pinecone Ginger Invasive?

The plant is not considered a high-risk invasive species, but is sometimes deemed invasive outside its native range.

However, it spreads at a rapid pace and has the potential to restrict the spread of other plants if provided limited space.

Red pinecone ginger serves the purpose of an exotic, landscape accent due to its bright green foliage and flamboyant red cone-like inflorescences.

They make a beautiful floral arrangement when used as cut flowers and are used as ornamental plants.

It has been used for traditional medicines since ancient times and is associated with Southeast Asian ginger sesquiterpene: cancer cell proliferation, free radical generation, and protein production.

This plant is known and used widely for its anti-inflammatory activity.

Its traditional uses include treatment of a myriad of conditions like stomach aches, diarrhea, sprains, toothaches, and even cancer.

Due to this, recent studies have established a number of pharmacological uses for zingiber zerumbet smith.

The leaves of the plant are used as a food additive and wrapping material.

The slippery sap extracted from the rhizomes of zingiber zerumbet is used to make shampoo, hair conditioners, essential oils, and perfumes.