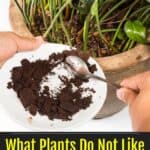 Most plants can benefit from being fertilized by coffee grounds. Coffee grounds contain the three basic nutrients all plants require, which are:

However, while most plants can benefit from the nutrients contained in coffee grounds, not all do, and you should refrain from using coffee grounds on those plants which they don’t help.

This article will explain three problems caused by coffee grounds and why some plants don’t benefit from having them applied.

Coffee grounds hold water, and if they are applied incorrectly, then nearly any plant can be overwatered by the coffee grounds.

Plants that have too much water can become waterlogged and unable to absorb moisture through the roots quickly enough. They turn yellow, the roots rot, and the plants eventually die.

You should not use coffee grounds directly as mulch around houseplants. Instead, it should be mixed sparingly into potting soil.

In the garden or under a shrub or hedge, coffee grounds could be sprinkled more freely as mulch since the amount of water the grounds can release is less than the amount available to the soil from other sources.

A better way to use coffee grounds for mulch in the garden may be to put them in the compost heap. As the coffee grounds decay into compost, they will release the nutrients and water they contain.

Coffee contains tannic acid. Most plants would benefit from coffee grounds’ nutrients, and many don’t mind slightly acidic soil. But many plants demand a neutral or slightly alkaline soil.

For these plants, the harm of the acid in the grounds might outweigh the benefits of the nutrients.

However, other fertilizers are readily available, and some are even specially compounded for heavy-feeding plants, and these are probably more useful for application than coffee grounds.

Herbs often prefer acidic soil. However, borage, oregano, and sage do not, and coffee grounds should not be used on these plants.

Ornamental shrubs and trees also prefer alkaline soil and do not benefit from coffee grounds. Fruit trees, boxwood shrubs, ivy, and most bushes and hedges shouldn’t have coffee grounds applied.

Flowers not benefiting from coffee grounds include the following:

They do not demand as many nutrients or frequent fertilizer as other plants, so the benefit of nutrient-rich coffee grounds may be excessive.