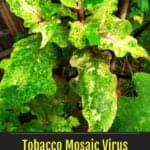 One day, you notice your tomatoes have a strange pattern forming on a few of their infected leaves.

You then notice strange patterns forming on other plants in your garden, such as cucumbers and peppers.

As you examine your plants further, you begin to wonder what is causing these strange mosaic patterns.

Unfortunately, your garden has contracted one of the most stable and best known mosaic viruses: the tobacco mosaic virus.

While not fatal, it’s crucial to deal with this virus when you encounter it.

What is Tobacco Mosaic Virus?

One of several mosaic virii out there, the tobacco mosaic virus (or TMV for short) has a somewhat misleading name.

The virus was named after one of the first host plants it was discovered on but can infect 9 different plant families and over 325 different species, mainly in the Solanaceae family.

Some of the different plants it can infect in your garden include:

While it may not be deadly, it can devastate food crops and turn your ornamentals into n eyesore.

It can even survive for up to 2 years in soil or dead plant matter, although it needs live plant cells to reproduce.

What Damage Does Tobacco Mosaic Virus Cause?

The exact effects of this virus vary based on the plant species, time of year, and which strain of the virus is infecting your plant (which can be infected by multiple strains at once).

However, the common symptom in most plants is a mosaic-patterned discoloration in the leaves, with the darker patches often being slightly raised.

In some cases, the leaves may become curled, wrinkled, cupped, elongated, or stunted.

This last effect commonly happens if the plant is infected early in spring or was infected the previous year.

It can severely stunt their growth in food crops, resulting in devastatingly poor yields.

It’s highly virulent and transmitted through several means, such as:

Unlike cucumber mosaic virus, it’s not easily transmitted by garden pests, although some chewing insects such as grasshoppers and caterpillars have been known to be vectors on rare occasions.

How To Control Tobacco Mosaic Virus?

Unfortunately, there’s no real cure or treatment for this virus.

Once a plant has the virus, the plant should be destroyed. Unfortunately, plants spread the virus easily to other plants by you or a pet brushing up against it.

The seeds are also contaminated, with younger plants having the most virulent contamination.

When you find an infected plant remove it immediately.

Wear disposable gloves and sterilize your tools both before and after each plant.

Dispose of the plant in an airtight plastic bag and burn, if possible.

If you can’t burn it, double up the bag and take it directly to a landfill so it won’t break open and infect garbage trucks.

Contaminated soil should not be replanted for 2 years, while potting soil should be discarded in the same manner as the plant.

Be warned that root fragments or other infected debris may be in the soil.

A 30-minute sustained temperature of 125° degrees Fahrenheit on dried leaves will kill the virus. But, it will easily kill the hardiest of plants. First, however, you can use the process to sterilize the soil.

Related: What Is The Asters Yellow Virus?

You will need to resterilize all of your tools after, as well as anything that may have come into contact with you or the plant during the removal process.

Wash your clothes and wash your hands, even if you wore gloves.

If the plant was indoors, use a floor or carpet disinfectant after vacuuming the area (making sure to also disinfect the vacuum).

To help prevent the mosaic virus spread, it’s important to wash your hands with a disinfectant soap after handling any tobacco products, especially if you hand-roll.

Finally, only buy seeds or plants from a reputable seller who inspects their stock regularly.

Remember, TMV may not kill your plants, but it spreads easily and can ruin crop yields, so every gardener or plant enthusiast needs to do their part to combat this virus.