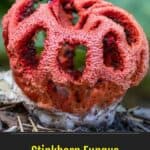 If you’ve ever experienced a stinkhorn fungus infestation in your garden, you’ve undoubtedly wanted to know how to get rid of it.

The unmistakable smell of rotting meat will alert you to a potential stinkhorn fungus outbreak in your home garden. The stinkhorn mushroom is named for its pungent aroma and foul odors.

Stinkhorn fungus come in various shapes. Most recognizable is the distinct red-orange mushroom with a white stem-like structure and a bell-shaped head. Some stinkhorns grow with appendages that make them look like octopuses.

Although stinkhorns are ugly, they are not a threat to the plants in your garden. Stinkhorns help convert plant debris into nutrients and improve soil fertility. This is why they grow on dead organic material.

Still, controlling a stinkhorn outbreak is a priority for most gardeners.

What is the Stinkhorn Fungus?

Found in the tropics and temperate regions, their botanical name is Phallus impudicus. They may seem to appear out of the blue in your lawn, mulch, or areas with bare soil.

They tend to prefer cooler temperatures. You’ll often find them in moist areas with a high concentration of organic matter.

Stinkhorns have a preference for hardwood bark mulch over pine needles or pine mulch. You’ll often see them in partially shaded beds, although they may show up in thin turf too.

Organic materials such as soils and mulches often introduce stinkhorns into a garden. Given their offensive odor, you may sniff them out before you see them.

Their smell comes from the spore containing the dark brown or black slime that oozes from their surface.

The stinkhorn’s stem grows up to 8″ inches high, and the odor they produce attracts flies and other insects. Thus, you’ll commonly see the stinkhorn’s slimy bulb covered in flies.

Flies feed off the spore containing green gleba liquid the fungus produces. After eating the spores, flies spread the spores over a vast area, like how bees spread pollen.

Stinkhorns tend to increase in groups, so there are likely others around if you spot one in your garden. If you don’t see other fully-developed stinkhorns, check for stinkhorns still in the egg stage.

Stinkhorns don’t give off any smell in the egg stage but are easy to identify. You’ll often find them partially buried in pine needles with noticeable white skin.

What Damage Does Stinkhorn Fungus Cause?

If it weren’t for the foul smell like the Stapelia, the stinkhorn would likely be welcome in many gardens. Stinkhorns break down organic matter. This benefits landscapes and gardens with nutrient-poor soils.

Also, stinkhorns are edible. Some people choose to eat them when they are in the egg stage, well before they stink.

In some parts of Europe and China, stinkhorns are considered a delicacy. They are pickled raw and sold in markets.

Stinkhorns are not harmful to plants or people. Plants can use the material stinkhorn’s breakdown for nourishment.

How to Control the Stinkhorn Fungus

The excellent news about stinkhorns is they’re a seasonal fungus.  You only have to worry about them for a few weeks once or twice a year as they thrive in cool and wet weather.

Furthermore, stinkhorns often attract flies and other insects, which may motivate you to search for ways to get rid of the smelly fungus.  Whatever your reasons, there are several ways to rid your garden or lawn of stinkhorn fungus.

Plucking stinkhorns as they appear is the most straightforward method for getting rid of stinkhorns. Unfortunately, this is a temporary fix and will not permanently eradicate them.

Even after plucking them, the stinkhorn’s fungal threads will remain in the mulch or soil. Eventually, other stinkhorn fungi will pop up.

Moreover, the stinkhorn attracts flies, and insects will carry their spores and introduce them to new locations.

There are no chemical treatments available to prevent stinkhorns from growing in a garden. Using chemicals to combat stinkhorn infestations is not recommended.