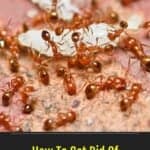 When you see ant colonies out in the yard or garden, you generally don’t give them a second thought.

These small critters help remove organic waste, assist in keeping the soil aerated, and even kill some pests.

Of course, they’re not always the heroes, and spotting little red ones can pose a big problem over time.

What Are Red Ants?

There is a common misconception that red ants mean you have fire ants in your garden beds.

Thankfully, the red gals in the US are usually a little less dangerous.

They’re a largely beneficial species but have earned pest status among many gardeners.

Leafcutter ants, meanwhile, are far more prominent, usually red, and have some presence throughout the Southern US (more than 11 species known to inhabit Texas alone).

They harvest leaves and fungus, which it uses to bolster the colony.

Many black ant species (including some harvesters) have domesticated aphids and other honeydew-producing insects such as cattle, leafcutter ants, and domesticated fungi in the Lepitioceae family and even a bacterium that helps them avoid foods toxic to the fungus.

While a largely beneficial species, leafcutters can be a nightmare when they decide to make your garden into a supermarket.

It should be noted that the term “red ant” is sometimes misleading. The colors on red ant species can range from bright orange-red to brown and have more than one color present on their bodies.

What Damage Do Red Ants Cause?

Leafcutter ants use their scissor-like mandibles to cut away leaf portions to carry home neatly.

They have a reputation for strength and can carry several times their weight (imagine carrying your car around).

Unfortunately, they tend to build massive colonies ranging from 260′ feet to an insane 6,400′ square feet, which means more food is needed for the fungal farms and more difficulty getting rid of a colony.

This makes it even worse if you’re growing plants the fungi thrive on.

The genus Atta is most notorious, as they can damage roads and farmland due to the colony’s size.

Even worse, they can defoliate crops at a rapid pace, completely denuding a citrus tree in as little as 24 hours.

Meanwhile, red harvester ants are incredibly useful in the garden.

They help aerate the soil and remove dead or decaying matter.

However, all harvester ants also have a stinger full of potent venom, which can make them a pest when you’re weeding.

The ant will bite down and quickly thrust the stinger into its attacker if threatened.

Harvester ant venom can be extremely painful, resulting in between 4 and 8 hours of sharp pain and sweating around the wound.

Despite being a popular class of ant for pets, this risk of getting stung outside and the large mounds they make are two reasons they’re listed here as a potential pest.

How To Control Red Ants in the Garden?

Before you get rid of the ants, it can be important to identify the species you’re dealing with.

This can be a painful (sometimes literally) task, but a necessary one, as some species are known to be important food sources of endangered species, such as the threatened Texas horned lizard (Phrynosoma cornutum), which relies on red harvester ants for 70% percent of its diet.

Once you’ve identified the species, you may be able to deter the colonies of some species by frequent tilling or mowing.

Food-Grade Diatomaceous earth, or DE for short, is a powder made of crushed, microscopic diatom fossils.

When an insect or other tiny critter crawls over them, the sharp surfaces cut through the pest’s protective wax coating and into the exoskeleton, causing them to lose body moisture and die of dehydration.

DE is extremely easy to use, as well.

Dust the ground around your plants with food-grade DE every few days and after it rains (the rain will render the DE useless).

Neem cakes are another great option and double as fertilizer.

These cakes are the solids left over from extracting neem oil and contain trace amounts of neem, killing the ants without harming earthworms.

Pour 2 to 4 cups around the roots for most plants, more for larger.

The Azardchtin in the neem will become a systemic insecticide, killing any bug that bites into or pierces the plant while remaining non-toxic to humans.