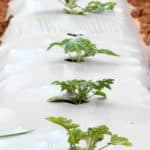 The use of plastic sheeting or mulch in vegetable gardens proves to be a useful tool for some garden crops.

Many crops do well with the support of plastic sheeting and plastic mulch. These innovative products have many uses in the garden.

In the article we will explore:

There’s a lot to like about using a polyethylene film in the garden. The USDA has even termed the practice as – plasticulture.

This landscaping fabric acts as a great insulator keeping the soil warm during the day and staving off the cold during nights.

Laying plastic can mean the big difference in producing sickly green or ripe, red tomatoes, moldy or luscious strawberries, or in a good harvest of melons or none at all.

The immediate advantage of using clear polythene sheeting is its ability to eliminate seriously annoying weeds such as onion weed, ivy, dock, rhizome grasses, and other tough ones which prevent plant growth.

The clear plastic lets the sunlight pass through for optimal soil absorption. It warms up the soil for maximum mulching potential.

The plastic film along with the focused rays of the sun heats the soil temperature underneath a coating of plastic.

For more read our article – Soil Solarization: How To Kill Soil Pests and Diseases

Black plastic mulch sheeting has been in use since the 1950s. It is the most popular and least expensive of the many-colored mulches available.

This mulch has carbon added to “create” the black color. The dark or black color makes it very good to prevent weeds and allows little or no light to pass.

It also warms the soil very well throughout the growing season in the vegetable garden. This is especially true if a great deal of the plastic is in direct contact with the soil.

Black polyethylene sheeting is very good for warming up the compost pile and soil for vegetable crops (tomatoes, strawberries, pumpkins, and melons) that love the heat.

How much can the soil temperature increase?

According to the North Carolina State Extension under black mulch a 4 to 5°F increase measured at a depth of 2-inches. At the same depth, infrared transmitting (IRT) mulch showed an increase of 5° to 8°F and clear mulch an increase of 8° to 10°F.

The gas carbon dioxide (CO2), is important in the process of photosynthesis. The black sheeting greatly reduces the ability of CO2 to pass through the plastic.

This creates higher levels of CO2 to build up under the sheeting. The CO2 escapes through the holes in the plastic mulch with a “chimney effect” creating increased local concentrations of CO2  around actively growing leaves.

Crop times from planting to harvest are typically 2 to 21 days earlier for crops grown “under mulch.”

This extends the growing season allowing you to “get a jump” on the season by planting earlier and growing crops longer into the season.

The moisture that would normally evaporate from the soil is held in by the sheeting. The reduced evaporation does not mean less irrigation will be required for optimal plant growth.

You’ll have better control of soil moisture as excess water runs off the sheets into the rows. This reduces excess water stress and keeps plants from drowning.

The reduced contact of leaves with the soil and puddles produces a cleaner, healthier crop making plants less likely to diseases spread by splashing water and root rots.

Black sheeting or mulch does a great job of blocking weed growth and thwarts the reproduction of many pathogens and pests.

Clear plastic allows light to pass through. To control weeds with clear plastic may require the application of an herbicide.

The combination of warm soil, better soil moisture control, reducing crops battling with weeds for moisture and fertilizer, better use of water, and fertilizer not being leached all lead to better crop yields.

The soil under the mulch remains loose and well-aerated.

Using black plastic for gardens is not all “perfect”, there are some cons!

Some Crops Do NOT Grow Well Under Sheeting

It stands to reason that cold crops (e.g. lettuce, spinach, peas, and root veggies) would not do as well growing under plastic ground cover.

Black plastic mulch could potentially overwork and trap in the heat, scorching plants.

Crops that grow in the cool seasons such as root vegetables, peas, spinach, and lettuce do much better without the use of plastic sheet cover.

The Effectiveness Goes Down In Cooler Locations

The effectiveness of garden plastic sheets or a black garden tarp goes down when used in the cooler, coastal regions. The warmth wouldn’t be enough to get rid of the weeds.

In very cold areas black garden plastic rolls might not keep the soil hot enough to kill off weeds and pathogens.

Plants with long roots won’t be able to draw as much water as they need with plastic sheets on top. Overhead sprinklers and natural water from rain won’t effectively reach the plant’s bed.

The contained water could also work to your disadvantage, as it will not evaporate as quickly in the open air and could make the soil soggy and create potential disease issues such as fungal growth.

When planting crops the time involved will take longer as each individual plant needs to be planted into it’s own hole.

It’s Hot To Work On And Slippery

As mentioned above plastic sheeting will hold heat making working on the sheeting hot.

The reflected heat can also make it uncomfortable to work on and around. Consider performing any work early in the morning or late in the day.

NOTE: Years ago in the nursery, when laying down black plastic sheeting in the afternoon become too hot to touch! Laying the sheeting early in the days was not an option!

Once water gets on plastic sheeting it can get slippery making it difficult to work on. Watch your step!

Before The Plants Are Established, It’s A Bit Of Work To Keep The Plastic Down.

When laying sheeting and waiting for plants to become established make sure the plastic stays securely in place.

Place bricks, large rocks, or concrete blocks on the edge to keep the wind from getting under the plastic.

What Type or Kind Of Black Plastic Mulch Should You Use?

The choice of plastic mulch depends upon both the visual effect you want to create and the type of crop you plan to grow.

There really hasn’t been a lot of research done on the results of using different colors of mulch, so it’s a learn-as-you-go process.

What’s The Best Thickness Of Black Plastic Sheeting For Gardening?

There are several different thicknesses of black poly sheeting available.

The thickness of the plastic garden liner is rated using the term “mil”, which is a measurement equaling 1/1000th of an inch (0.001).

To give you an idea of the size of this measurement, a dime is 53 mils thick. A credit card is 30 mils. A piece of typing paper is 1 mil, but a paper grocery bag may be between 2 and 3 mils thick.

The thickness most commonly used for black plastic sheeting is 6 mil; however, this product is also available in thicknesses ranging from 3 mils to 60 mils.

Naturally, the thicker the plastic for flower beds is the more durable it will be and the longer it will last.

Very thin sheeting must usually be replaced every season. Thicker sheeting may last for several years with good care.

For a very thorough treatment of the qualities of plastic sheeting, visit Global Plastic Sheeting here

Both landscape fabric and plastic mulch can help reduce soil erosion and prevent weeds while keeping the soil in place and keeping weeds from sprouting.

I prefer to use the porous landscape fabric in landscape beds and in areas that are longer-term and multi-seasonal.

I like to use plastic sheeting in the garden where it is removed after each season.

These days there are many attractive options available in colored plastic mulch.

Clear, white, and black plastic mulch has been used in commercial vegetable production for over 50 years.

Today, homeowners can choose from a rainbow of colors to enhance both the production and the curb appeal of their home food production endeavors.

The Colors Of Plastic Mulch Is Best?

You can choose from many different colors, including:

In use since the 1950s, this is the most popular of all the mulches available.

These few extra degrees of heat allow you to set your plants out considerably earlier, leading to earlier plant maturity and more fruit sooner in the growing season.

Interestingly, the use of plastic mulch in both red and blue produced similar results.

In cool climates with short growing seasons, white plastic mulch may not be a good idea.

It can definitely help cool the soil in areas of extreme heat, smother weeds, retain soil moisture, and have cooler soil temperatures.

These effects make it possible to grow cooler weather crops such as cauliflower, cabbage, peas, and broccoli in warmer climates.

Trials show that white plastic mulch is more effective than biodegradable options such as straw.

Although it is more costly initially than these options, the fact that it lasts forever makes it a more economical mulch choice.

To get all of the qualities that brown IRT mulch offers, follow the advice of the University of Vermont Extension in their factsheet.

Make sure you look for IRT labeling when purchasing brown plastic mulch. If it is not labeled IRT, it will not provide all these benefits.

According to research conducted by Clemson University in conjunction with the USDA, some crops do much better when surrounded by red plastic mulch.

In general, home gardeners report greater yields and larger fruit sizes in a wide variety of crops including peppers, eggplant, and tomatoes.

Penn State researchers found that blue plastic mulch is very good to use when growing cucumbers, summer squash, and cantaloupe.

If whiteflies and aphids are a problem, this innovative product can be very helpful.

Furthermore, studies conducted at Virginia Tech indicate that the use of silver plastic mulch discourages cucumber beetles on both squash and cucumber plants.

Biodegradable plastic mulch (BioTelo) made of corn starch along with other biodegradable substances is currently available in black and clear.

Research conducted by Cornell University indicates that this mulch works just as well as “traditional” plastic products and can simply be left in place to break down and enrich the soil when it begins to wear out. [source]

How Do You Water Your Garden If It’s Covered In Black Plastic Mulch?

When growing plants with plastic mulch irrigation need to be provided. Homeowners can install soaker hoses under the plastic sheeting to provide the additional water right where it is needed.

At the plant roots!

Learn more in our article: Soaker Hoses – What Are They And How To Use Them In The Garden

How To Dispose Of Plastic Sheeting And Plastic Mulch Responsibly?

It may seem that using plastic in the garden is counterproductive when it comes to providing good stewardship for the earth.

When the time comes to dispose of these products, be sure to seek out a recycling program to prevent having them end up languishing in the landfill or endangering wildlife in the ocean.

Naturally, plastic tears and wears out with the passage of time and exposure to the elements.

When you purchase any plastic product, look for recycled plastic or biodegradable plastic.

Used and disposed of responsibly, plastic sheeting and plastic mulch can be very wise choices for the thrifty, earth-friendly gardener.

These products help you make better use of precious resources, keep pests and pathogens under control. Prevent soil erosion and allow you to enjoy healthier and more abundant crops.