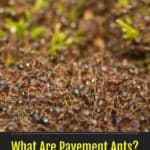 Ants are something of a mixed bag for plant enthusiasts. On the one hand, ants kill several plant pests and help aerate the soil.

Some species even help clear organic waste that could attract harmful insects.

On the flip side, some species cut sections of leaves or actively protect aphids and other piercing and harmful insects they treat as cattle.

While protecting these pests, ants try to kill ladybugs, parasitic wasps, or other predator insects that threaten their livestock.

With over 22,000 estimated species and nearly 14,000 officially classified globally, there’s no question that you will have to deal with ants doing naughty things to your garden at some point.

One genus in particular, Tetramorium spp. (better known as pavement ants) can be a real problem if they start invading the garden during a pest issue.

Here’s all you need to know about pavement ants and what to do when one of the 520 species starts causing trouble in your garden.

What Are Pavement Ants?

These ants are harmless to humans and pets but sometimes invade homes in search of food.

One species, particularly Tetramorium immigrans, arrived in the Americas in the 1800s.

It’s now one of the most common species in the urban and suburban US.

The presence of tiny mounds of sand or soil in the cracks or spaces between sections of pavement and masonry acts as the most telltale sign of a pavement ant nest.

Pavement ants won’t directly harm your plants, but their diet includes many things found in the garden, such as:

This means they’ll protect aphids, mealybugs, and other piercing insects from natural predators in exchange for their frass (AKA honeydew).

While pavement ants aren’t directly threatening your crop or ornamental garden, they can contribute to infestations and put your plants at risk.

Something else to watch out for with pavement ants is their nesting habits.

Pavement ants won’t cause structural damage but tend to build their colonies under rocks, masonry, cement, and concrete.

Despite only being around 1/16” to 1/8″ inches long, the colonies can grow quickly and often have more than one queen.

They’re often a brown or brown-black and tend to have an oval abdomen with a stinger used for leaving scent trails.

These trails are one of the most apparent signs of a colony. Columns of ants will move across the ground to collect food sources, including those high up in a plant.

It’s easy to see why this can become a problem for your garden.

How To Get Rid Of Them In The Garden?

There are several different strategies to rid your garden of pavement ants.

Let’s look at some of the best methods from highest risk to lowest.

If you want to do it fast, you’ll need to trace an ant column back to the nest.

Again, remember that dozens of entrances could spread over a wide area.

Also, the fast methods tend to harm nearby plants, so plan your attack carefully.

Once you’ve located one or more nest entrances, pour a large container of boiling water onto the entrance.

The water will instantly kill any ants near the surface and boil hundreds more as it soaks down into the soil and cools.

This water will kill any plant roots touching it, so use this method wisely.

If you’ve located nest entrances or ventilation shafts, you can use an insecticidal spray such as Ortho Home Defense.

These sprays kill insects on contact and leave behind a residue that can last for around 3 months on outdoor surfaces.

Remember, this is a barrier spray, and the ants can excavate new entrances to their nest to avoid the treated area.

Also, these sprays kill beneficial insects and can prove toxic to humans or pets, making it a risky method.

Note that insecticidal dust and some sprays can wash away or shift by the wind. Therefore, you may need to reapply often.

A little Dawn dish soap per cup of water is usually safe for plants, although a few plants are sensitive to it.

The downside is that the neem or soapy water only works when sprayed on ants. Therefore, it does little to eliminate the colony itself.

Sticky traps are far more effective indoors but can still be used in the garden to some effect.

The best use for a sticky trap is placing it around a plant swarmed by pavement ants.

While it’s not the best remedy, this is a great lead-in for a one-two knockout. It gets the ants away from a vulnerable plant so that you can use other methods more effectively.

Bait traps are some of the most effective tools against ants.

Because they kill slowly, the ants will store some of the poison in their crop to return to the colony.

This can lead to poisoning the queen and effectively destroying the nest.

Take care to keep away from places children or pets can access. Instead, create small “motels” that only the ants and similar-sized critters can access.

Food-grade diatomaceous earth is safe around humans and pets but can easily kill ants and other bugs.

It’s made of the crushed fossils of diatoms, a microscopic organism.

The jagged edges will lacerate a bug’s exoskeleton as they crawl over it, causing them to dehydrate and die.

As a bonus, it’s incredibly uncomfortable for rodents and other minor garden pests to walk on, serving as an effective deterrent.

But it washes away easily, so you’ll need to reapply every few days until the ants stop appearing.

Certain plants that can be a great addition to any garden also repel ants and many other pests.

Consider planting cloves, lavender, rosemary, or turmeric around the garden.

The strong scents make it more difficult for ants to follow their scent trails. These plants also give you more kitchen goods.