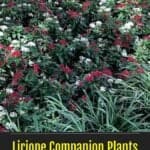 There are a couple of different sorts of Liriope.

Both are often commonly referred to as Lilyturf, and both are very hardy easy-care ground covers, but there are some differences between the two.

In this article, we explore those differences and make smart recommendations for choosing the right Liriope for your setting and the right companion plants for your Liriope.

What Are The Two Sorts Of Liriope?

The Liriope Muscari plant is commonly called Lilyturf, but you may also hear it called:

This plant is a broadleaf evergreen member of the asparagus (Asparagaceae) family with a clumping growth habit.

This plant is a slow grower that likes a shady location and well-draining acidic or neutral soil.

Big Blue’s long leaves (8” to 12” inches) make it look like ornamental grass, but it is not actually grass at all.

Liriope spicata is also commonly called Lilyturf, but you may also hear it called:

This plant is a spreading perennial member of the Asparagaceae family of plants. It is fast growing and spreads rapidly through rhizomes.

It is an attractive ornamental ground cover but can be quite invasive in a conducive environment. This plant likes very fertile soil and light shade.

This plant grows to be 6” to 10” inches high. Its leaves transition to an attractive shade of bronze in the wintertime.

What Are The Best Liriope Plant Companions?

The companion plants you choose for Liriope will depend in some part on the type of Liriope you choose.

When looking for companions for Big Blue, you’ll want plants that prefer solid shade and acidic to neutral soil.

When looking for companions for Monkey Grass, you’ll want plants that do well in partial shade and prefer very fertile soil.

Furthermore, because Monkey Grass spreads aggressively, its companions must be equally aggressive to keep up.

Your uses of the two sorts of Liriope will also differ.

While you could plant Big Blue as a border plant or as a backdrop for smaller plants, you’ll find that Monkey Grass is a better choice as a ground cover.

If you want to keep it under control, you may wish to plant it in large planters and choose companions to surround it in the landscape or other containers.

Liriope Companion Plant Choices Are Many And Varied

Some good choices in companion plants for Liriope include:

Ferns of many sorts may do well with Liriope.

Generally speaking, ferns like acidic-to-neutral, well-draining soil amended with plenty of organic matter, which helps retain just the right amount of moisture while adding nourishment to the soil.

For this reason, ferns make an excellent choice as a companion for either type of Liriope.

Make precise choices by evaluating the exact needs of each kind of fern you consider.

A taller grass with a fairly aggressive growth habit may make a lovely backdrop to an area covered in Monkey Grass.

Lower ground cover sorts of ornamental grasses can look nice surrounding Big Blue as a focal point or when it is planted as a backdrop or border.

Flowering bulbs and annuals can look very pretty scattered amongst a patch of Monkey Grass or alongside a clump of Big Blue.

Even though the main calling card for both types of Liriope is the foliage, it is important to remember that these plants also have small but pretty lavender-colored blooms.

Plant bulbs when you plant Liriope of either kind for a bright, easy-care springtime garden.

Keep an area clear to add annual flowering plants every spring if you wish.

Geraniums can be pretty when planted amongst Big Blue Lilyturf or beside or behind a patch of Creeping Lilyturf.

Depending upon your climate, Geraniums may be kept as either annual or perennial plants.

If you live in an area where geraniums can be kept as perennials, plant them as a border or backdrop to Monkey Grass.

If you live where they are treated as annuals, add them into open spots amongst your Giant Lilyturf.

Hostas are good, sturdy plants grown from bulbs. They can grow well in various conditions but typically like part to full shade and well-amended, well-draining soil.

In addition, hostas produce small, pretty lavender flowers atop tall stalks, so their blooms will combine well with either type of Liriope.

Spotted Deadnettle (Lamium maculatum) is a pretty, perennial ground cover that does well in various settings.

There are over 50 species, and they come in several shades of green, white, and silver variegation.

In addition, these plants produce small, pretty clusters of flowers in shades of white, yellow, and lavender.

This member of the mint family spreads freely and returns carefree, year after year.

Liriope can also make a nice understory for shrubs and bushes. When planted as a groundcover, the plants help shade the soil and keep it cool.

Pretty, lavender Liriope plants under a stand of white roses (for example) can be stunning.

What Can You Do To Keep Liriope From Crowding Its Companions?

Begin by carefully considering which sort of Liriope you want to plant.

If you live in an area where Monkey Grass is likely to become invasive, don’t plant it! Choose to go with Big Blue instead.

If you do choose Monkey Grass, plant it in a way that contains it. For example, use planters or raised beds with a base of fine mesh hardware cloth to prevent your plants from getting out of control.

Choose companions just as aggressive as Monkey Grass, and separate your plantings with physical barriers or containers.

If you find your Monkey Grass has overgrown some other desired plant, dig it up, separate it and replant it some distance away.

Which Liriope Should You Choose?

Generally speaking, you are better off with Liriope Muscari because it is more controllable.

However, you should really only choose Liriope spicata if you have a large area that you want to cover with this quickly spreading ground cover.

Aside from the controllability factor, another advantage of choosing Liriope Muscari is that it comes in several varieties, so it can actually serve as its own companion plant.

Mix and match variegated cultivars such as:

These plants provide both pretty, colorful foliage and larger, more attractive flowers than those produced by Liriope spicata.