Acer Palmatum [AY-ser, pahl-May-tum] is a woody plant belonging to the family Sapindaceae and is native to Japan, China, Korea, southeast Russia, and eastern Mangolia.

While the plant has been cultivated in Japan for centuries, it started to be grown in temperate regions around the world in the 1800s.

In Britain, the first tree of Japanese maple was planted in 1820. 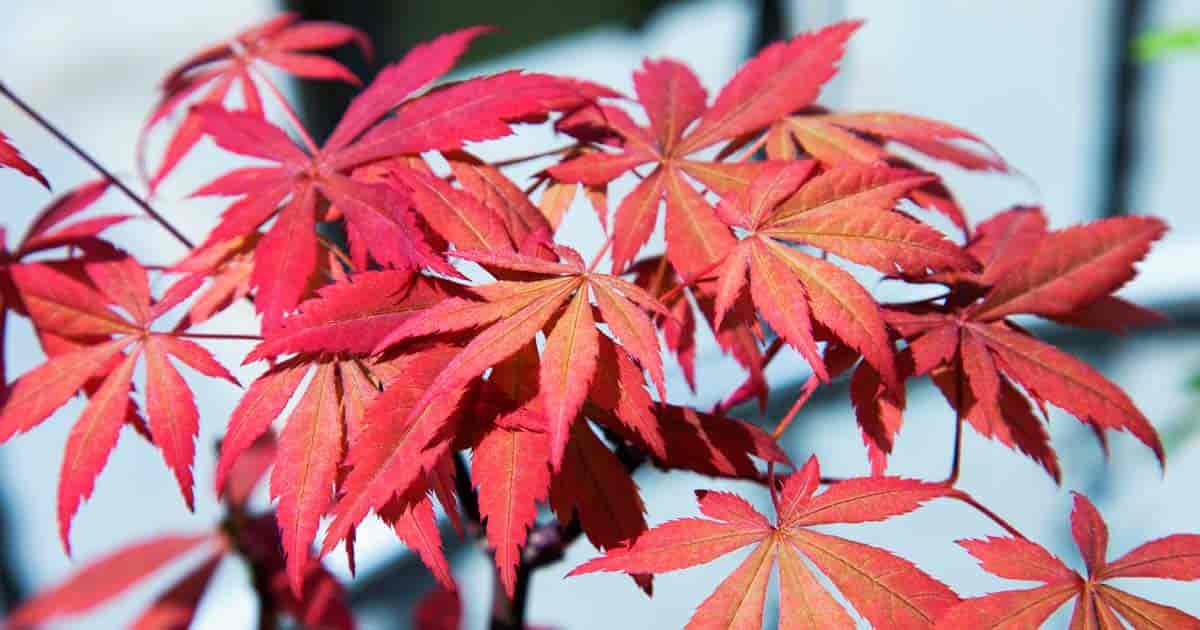 Acer Palmatum is a beautiful deciduous small tree or large shrub mainly characterized by its leaves which change color with the season, and its unique shape.

Sometimes, the plant also has multiple trunks joining together very close to the base, making it unique from other plants.

However, in some rare cases, the tree grows more than 52’ feet high.

In cultivation, on the other hand, the Japanese maple remains smaller.

Due to various sizes, the growing time also varies.

The Japanese Maple is interesting year-round and typically leaf out in early spring and has many different variations:

A lot of the colors depend on the environment and hardiness zones it’s growing in.

However, it needs to be protected from harsh weather conditions, such as strong sun, and windy and dry weather.

This is because its foliage is very delicate and can get damaged in harsh weather.

Most Japanese maples do well in zones 5 – 8.

They grow in higher zones, but suffer from leaf scorch and require ample regular summer irrigation and protection from the hot afternoon sun.

From the end of summer till spring, the Japanese maple plant doesn’t need much water.

However, during the other times of the year, it needs to be watered regularly.

The young trees specifically need an adequate amount of water during periods of drought.

To help the plant retain moisture, lay a 3” inch layer of organic mulch during spring.

Don’t fertilize a dormant tree, this will stimulate new growth which will be damaged by late spring frosts.

While it prefers slightly acidic soil, the plant can tolerate a wide range of pH.

Winter is the ideal time for trimming; make sure to do it before the leave buds open and use a sanitized scissors, secateurs or bypass hand pruners.

Do not cut the main structural branches.

Acer Palmatum is one of those plants which self-prune the foliage not getting enough light, so it doesn’t need regular pruning.

Some growers, however, prefer to artistically shape their trees to enhance their aesthetic appeal.

They also heal quickly after pruning and do not need much aftercare.

How to Propagate Acer Palmatum

The most commonly used propagation methods for Acer Palmatum are:

One thing needing to be mentioned is more than 1,000 cultivars of Japanese maple plants are cultivated all over the world, with many new being developed with time.

Due to the variety of cultivars, the trees of Acer Palmatum are found in a large variety of sizes, leaf shapes, and colors, and bark color and texture.

Different varieties of the plant also exhibit different growth rates and patterns due to the same reason.

Acer Palmatum is susceptible to a number of problems affecting roots or leaves.

Sometimes, the problems occur due to lack of water.

Excessive drying can cause necrosis or browning of leaf margins, can cause the twigs to die and can lead to fungal cankers.

When grown in alkaline soils, the plant can sometimes develop chlorosis due to iron deficiency.

A vascular disease called verticillium wilt caused due to root infection can result in leaf wilting and can sometimes also kill the whole tree.

The roots can get affected by soil nematodes, which are parasitic worms.

Some leaf spot diseases can cause early defoliation.

Acer Palmatum is mainly an ornamental plant grown all over the world, mainly due to its spectacular colors and attractive forms.

It is also a popular subject of art, especially for bonsai.

In traditional Chinese medicine, the leaves and branches of the plant are used to treat certain diseases.

The sap of the Japanese maple tree contains sugar and is sometimes used as a drink or as a sweetener in the form of syrup.

In some areas, the leaves are also cooked.

According to a few reports, the leaves of maple species act as a preservative for certain crops, such as potatoes, carrots, and apples.

It’s a great companion with Azaleas and makes a great summer shade tree.